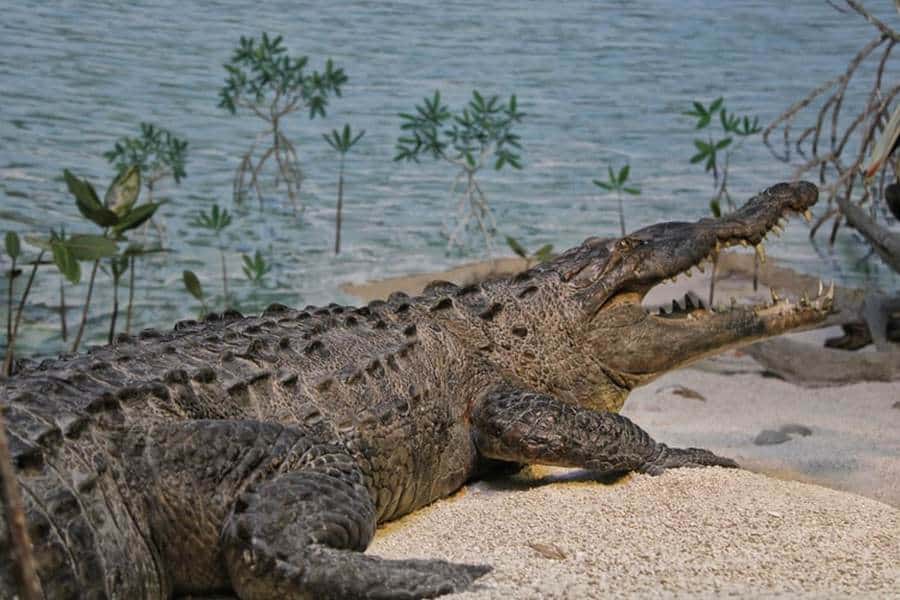 Crocodiles have the potential to be deadly. It is estimated that they are responsible for around 1,000 deaths per year worldwide, and in Australia, it’s usually 1-2 deaths per year. So it’s always a good idea to be mindful of crocodile safety, and that includes understanding the probability of there being crocodiles in the places that you visit.

When planning a visit to Woodgate, you might well be wondering whether or not there is the potential for crocodiles to be in the area.

. In October 2019, a crocodile warning sign was briefly erected while a crocodile sighting was investigated.

If you’re feeling confused, you are not alone! There is definitely a question mark hanging over whether or not there are crocodiles at Woodgate, so let’s take a closer look.

But that doesn’t mean that there is no chance that there could ever be a crocodile in Woodgate. All of the waterways are, after all, connected and with the crocodile population growing in size, people have argued that it’s only a matter of time before a crocodile ends up in Woodgate.

Anyone who spots a crocodile in Queensland needs to call the Department of Environment and Science on 1300 130 372. The DES

will then come in and investigate each and every report that they receive. If they find additional evidence of the presence of crocodiles, they will confirm the sighting. If they can find no supporting evidence, then the sighting remains unconfirmed.

All of the sightings in and around Woodgate have been unconfirmed, meaning that no evidence of crocodiles could be found when they were investigated by the DES. Of course, this isn’t proof that there wasn’t a crocodile, but it means that no one could find any evidence of there being a crocodile there.

Crocodile sightings at Woodgate Beach aren’t common at all, happening only once every few years. And there are many anecdotal reports that were never reported to the DES, so it is hard to get an accurate picture of the crocodile sightings in the area.

Apart from these sightings, there has been many a tall tale circulating through the area of people regularly seeing crocodiles when out fishing, but it really is hard to say whether these reports are accurate and it doesn’t seem that any of them have been reported to the DES.

Why Are Crocodiles Travelling Down South From North Queensland?

The possibility of crocodiles emerging at Woodgate is, unfortunately, becoming more likely, and the culprit is climate change. To date, the furthest south a crocodile has been confirmed is Mary River, south of the Boyne. Although there have been several unconfirmed sightings at Fraser Island and Tin Can Bay.

The main factor stopping crocodiles from venturing further south is the temperature difference. A temperature drop of just a couple of degrees is enough to deter a crocodile from entering the water. Another factor is the amount of water available. Crocodiles need a constant presence of water and in many of the estuaries and rivers further south, the water comes and goes.

Both of these factors are impacted by climate change. As the water temperature and the water level both rise, the chances of crocodiles coming further south will increase. And crocodiles are more than happy to travel to find new territories, so if the water further south does become inhabitable to them, they will almost certainly arrive.

In 1939, there was a report of a crocodile that was spotted in Angourie, northern New South Wales. If the sighting was accurate, it would be the farthest south a crocodile has ever been spotted, but the experts believe that it was a case of mistaken identity, and was probably a large monitor lizard. Other people believe that people are actually seeing dugongs from a distance and mistaking them for crocodiles.

One other explanation for crocodile sightings that are too far south for the crocodiles to have swum there is that they are released pets. Very often, people keep exotic animals and can cope fine when they are babies, but struggle to manage as they grow into adulthood. It is possible that crocodiles have been released into the wild when their owners are unable to care for them anymore.

Other people believe that it is possible for crocodiles to swim as far south as New South Wales, but that they wouldn’t stay very long because the area would be too cold for them. With the sea temperature rising, any crocodiles that do venture further south would no longer have this reason to head back north and could stay and start a local population.

So are there crocodiles in Woodgate? Almost certainly not. But that doesn’t mean that there won’t be in the future. The rare sightings of crocodiles have never been officially confirmed, even when investigators searched the area for evidence. And they are most likely the result of mistaken identity.

The rising water temperatures due to climate change does bring with it the possibility, however, that crocodiles in Woodgate will be a common occurrence sometime in the future.