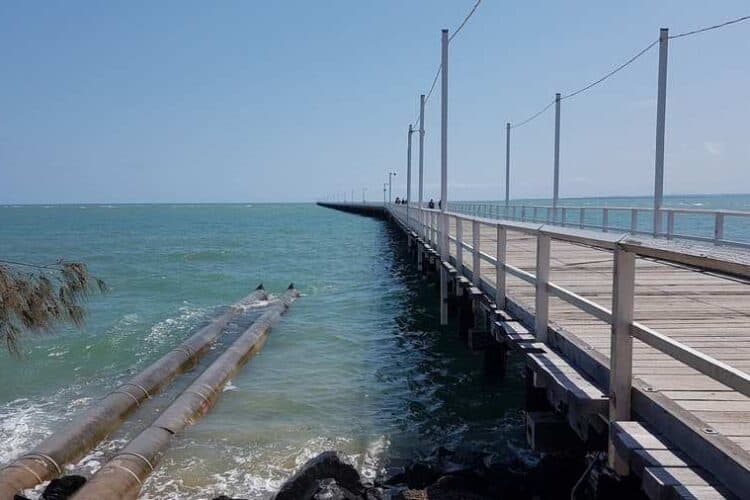 Australia is known for its wildly beautiful scenery and landscapes, however, one of the most exciting places to visit is the Urangan Pier.

Located on the shore of beautiful Hervey Bay, this pier gives visitors some of the best views of the bay leading into the South Coral Sea.

These stark and stunning views will easily create memories for any and all visitors.

Constructed between the years 1913 and 1917, the pier was initially used for exporting goods like coal and sugar. Throughout the years, it took on some modifications and eventually became more of a hot spot for fishermen and tourists.

The pier started out being approximately 1107 meters! (about 3600 feet). However, due to a serious need for repairs and renovation, the pier closed in 1985 to undergo a much-needed adjustment.

If you’re going to walk the whole length of The Urangan Pier set aside around 10 to 12 minutes each way, plus time to take in the amazing views most people spend on average around 45 minutes to 1 hour for a nice walk out to the very end.

During this closure, the pier was considered beyond repair and some of it was demolished. This demolition resulted in the pier shrinking down to about 868 meters (or about 2,848 feet). While this was not a popular decision, it was necessary to ensure the pier was still in the best condition possible.

The construction of the pier was a slow process and during the demolishing stage of its life, it continued being a slow process. The final touches to the pier officially competed in 2009.

In 2009, the pier was given steel pylons to help support its structure more efficiently over its original timber pylons. With such a rich history, the pier needed to be preserved as a mainstay for the Island and Hervey Bay.

After the pier stopped exporting goods, it truly becomes a popular place to fish. The length of it stretches into the sea and gives fishermen optimal advantage to catch interesting fish. If visitors go all the way to the end of the pier, it is very common to see schools of fish or stingrays nearby. The pier is truly a sight for fishermen or visitors, but fishing is the king attraction.

There are tons of fish found at the pier, but the most popular fish caught here is the whiting. This tasty fish is a delicious catch and can be found in the fish markets throughout the areas around the pier.

No matter what fish is being caught, this historical landmark on Hervey’s Bay Coastline really brings the excitement. Its rich history throughout the years has really helped the pier evolve into the popular spot it is today.

Every year there is an annual Urangan Pier Festival. This festival started out in 1986 and has increasingly grown in popularity throughout the years. It was initially brought forth to raise funds for the pier and the work that was done upon it. However, the main focus of the festival is celebrating fishing.

Whether people come for serious competition or just to relax under the sun with their fishing poles, there is something at the festival for everyone. There are many vendor stalls that come to the festival with foods and merchandise to purchase. This makes the event great for tourists, residents and their families.

The festival serves as a way to bring together a community that has shown its dedication to the pier’s history. While it is common knowledge that the pier was not an immediate success back in the early 1900s, it grew on people and its community.

When the demolition had arose, it really set forth a feeling of remorse for the community and they realized just how much this landmark meant to them. Ever since the annual festival has served as a tradition for the love of the pier and the love of fishing.

Fishing is a hot spot activity, but it’s not the only thing to do at or around the pier. The area around the pier is known as Pier Park and offers many fresh food markets for local food finds.

This is especially helpful for those visiting the newly opened Pier Caravan Park. The modern facility gives guests the freedom for cooking meals on their own in their accommodation.

With the pier so close, the fresh seafood is a pleasurable find. There are also other vendors selling various gifts and trinkets. It’s a smaller version of what can be found at the festival.

The park is located near the entrance to the pier and is considered to be an environmental walkway. This is also a popular spot for cycling as well. The walkway more specifically is where the old railway used to be when the pier was originally built. This railway served as a means of transportation from the pier to Pialba’s business district.

The walkway provides a little exposure to wildlife as well. Australia is well known for its wildlife populations and there are many environmental walkways throughout the country, but specifically around Fraser Island and the pier.

While this area is popular, the surrounding area for the pier is also interesting with many boutiques and eatery’s to check out. There most certainly is not a shortage of things to do here.

Are Dogs Allowed On Urangan Pier?

Residents visiting the pier may want to bring along their dogs. But are dogs okay? On the pier, Unfortunately, dogs are NOT allowed. Dogs love running around beaches and other seashore areas.

While they are not allowed on the pier itself, there are designated dog areas

near the pier that offer up some great spots for a man’s best friend. Some other places that are not close by include places like Shellcot Street and Ries Road which offers 24-hour off-leash areas for dogs.

This makes bringing dogs any time of day particularly great.

When it comes to Urangan Pier specifically, there is only one 24 hour spot for dogs. This lies between Margaret Street and Churchill St and is considerably smaller than other areas. While everyone would prefer a 24-hour spot, there are areas with limited hours. These hours generally are from 3 pm to 8 am.

These areas allow for an enjoyable experience for everyone. No matter where the dogs travel around Hervey Bay or Urangan Pier, they will have a great time! Each area where dogs are welcome they provide bags for cleaning up after your dogs as well. No day at the pier or beach is complete without your dog!

Popular Restaurants Near the Urangan Pier

A calming stroll along the pier with friends or family is a great pastime as well as a day of fishing. While these are great ways to spend a day at the pier, so is checking out nearby restaurants. Cuisine in Australia tends to be flavorful and fresh due to its proximity to the ocean.

These fresh ingredients give way to some of the best tastes of the ocean. Below are some of the most popular restaurants around the pier to check out while visiting the historical landmark.

This chic eatery offers some classy dishes for its guests. They set out to prepare foods that offer up great pairings with various wines. The cuisine offered are things like prawns, fresh fish, oysters etc.

They are also vegan-friendly offering up healthy choices for specific taste buds. The exotic tastes will excite and engage all their guests with flavour and wine pairings.

The Dock Bar and Restaurant:

This modern urban bar and restaurant is a popular spot in Hervey’s Bay near the pier. It offers up some delicious fare each day. The creative nature behind the cooks here really sets them apart from other local places. Things like lamb curry meatballs can be seen sometimes on the menu giving guests an exotic taste!

Urangan Pier, A Great Place to Visit In Urangan Qld

From tasty foods to interesting boutiques surrounding the pier, there are many reasons to visit the pier. The historic ambience really makes it a desirable place to visit as it emerges guests in a unique piece of Hervey Bay’s coast history.

While fishing is the main attraction with the long and spacious pier, perhaps the greatest reason to visit is to experience the scenic views. The rolling waves of the ocean and small cliffs make for the best memories, as well as viewing the perfect sunset or sunrise from the edge of the pier.

When visiting, guests owe it to themselves to view these tranquil and peaceful sights along the pier.

It is one of the many beautiful places to visit when in Australia and is a must-see for a once in a lifetime view. The pier and its length into the ocean make for a unique experience and view because guests are surrounded by the ocean.

It creates a panoramic view for miles and a skyline sight that just cannot be matched anywhere else. The various landscape along the skyline is a popular site, but as mentioned before, the end of the pier gives up close and personal views of schools of marine life.

The end of the pier provides an immersive view and feeling for its guests. Nothing is more surreal than seeing marine life and surrounding views.