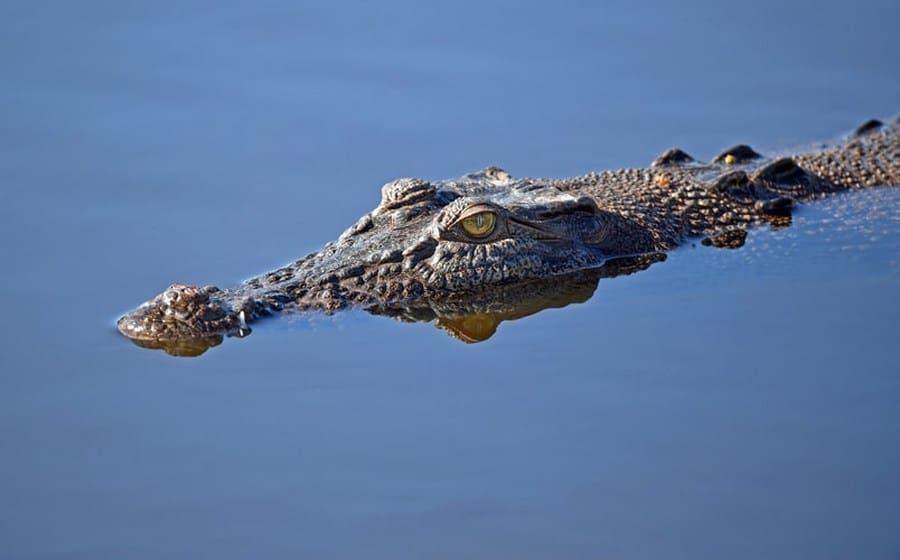 Crocodiles are one of nature’s more dangerous apex predators. They are incredibly massive in size and can be found in a variety of places including creeks, rivers, and even the ocean!

Australia is well-known for its wide variety of exotic wildlife, and crocodiles are certainly known to frequent the country’s waters.

Some of the more common areas where crocodiles can be found are in Queensland, Australia which is on the eastern coast of the country.

In fact, a certain portion of the state of Queensland is labelled “croc country” as the creatures are typically found within those limits.

This specific area is said to be from Gladstone extending to the far north regions of Queensland. However, crocodiles aren’t only exclusive to that region. They can be found in other parts of the state as well.

Rainbow Beach is a small rural coastal town in the southeastern part of Queensland. The town is known for its remarkable coloured sand dunes and lengthy 23km beach shoreline.

With so much shoreline and access to the water, some people question whether or not crocs can be found lurking in the waters around Rainbow Beach.

They are generally found in rivers and creeks because they need access to land and food. When it comes to Rainbow Beach, there generally aren’t any crocs found in the waters.

While it is true that crocodiles can be carried by ocean currents to other areas outside of their known territories, Rainbow Beach isn’t directly connected to a river system like some other beaches.

However, it is important to always be alert when near the ocean, especially in Australia, because dangers like crocs can appear.

Crocs, typically called salties or saltwater crocs, are huge reptiles that can be extremely dangerous. They can reach upwards of 6 metres in length (or around 19ft) and weigh as much as 1,000kg (or 2,200lbs).

Due to their relatively large size, it is critical that if anyone spots a crocodile that they report it to the special hotline by calling 1300 130 372 or online at the Queensland government website here

. This ensures that someone investigates the sighting and that it gets documented properly.

Throughout the years, people have claimed to see crocs in various areas of Australia. Once again, reporting it to the hotline is the best way to make sure that it gets addressed.

In 2020, Rainbow Beach did experience some croc sightings.

This includes one as recent as December of 2020 in the Inskip area. The sighting was reported and officers are still monitoring the area for any additional crocs that could show up.

Most crocodile sightings near the Rainbow Beach area occur off the shores of Fraser Island which is just north of the mainland coastal town. Even then, the sightings are few and far between.

which is a little under an hour’s drive from Rainbow Beach. These sightings are more common due to the river system in that area.

Are Saltwater Crocodiles Normally Found As Far Down As Rainbow Beach?

Typically, saltwater crocodiles are found within the region of Queensland that is considered “croc country“.

Once again, this stretches from Gladstone

in a northern direction to the Far North of Queensland, usually around Cairns

and beyond. These waters are more temperate for the creatures as they prefer tropical waters.

Unless a strong ocean current has carried a saltwater crocodile further south than Gladstone, they won’t be found as far down as Rainbow Beach. As expressed, even though they aren’t usually found that far down, anything is possible.

The ocean is unpredictable and could potentially transport a croc that far south. In fact, studies have shown that ocean currents can carry crocs incredible distances.

Some have been found over 48km from their original homes. Considering that crocs can go long periods of time without eating or drinking, this means they have no trouble surviving such long trips.

Croc country is said to start at Gladstone and extend north to the far north areas of Queensland. Gladstone is around 370km north of Rainbow Beach and is about a 4-hour drive by car.

This really puts some frame of reference to the proximity of Rainbow Beach to where croc country is said to start. The waters at Rainbow Beach are still relatively warm, yet comfortable (with averages around 28 degrees Celcius).

This means if a croc does make it that far south, the waters would still be okay for them.

As expressed, the most recent sighting of a croc in the Rainbow Beach area was around Inskip back in December of 2020. Prior to that, crocodile sightings at this beach were pretty non-existent.

The crocodiles that have been sighted throughout the years are off of Fraser Coast (although it isn’t completely confirmed) and along the Mary River which is much more inland and a much more likely area to find them.

While the Mary River is pretty far south from where croc country begins in Gladstone, it shouldn’t be too surprising that they would be found in this area.

A river is commonplace for crocs to roam and even though the Mary River is pretty far south, these enormous reptiles are more likely to follow the river system down.

Even though the history of croc sightings at Rainbow Beach is pretty slim, it is critical to always be alert. In fact, the state of Queensland (and the country as a whole) has implemented a programme designed to help people be wise about the dangers of these creatures.

The programme, titled, “Be CrocWise” provides important information on how to be safe if someone should encounter a croc. Below are the ways to stay CrocWise!

These are the primary, key ways to be CrocWise. Even though Rainbow Beach isn’t known for having crocodiles, anything is possible.

Both the weather and the ocean are unpredictable which means crocodiles can be carried to areas they aren’t usually found.

Staying CrocWise in areas like Rainbow Beach that are typically safe is simply staying responsible!