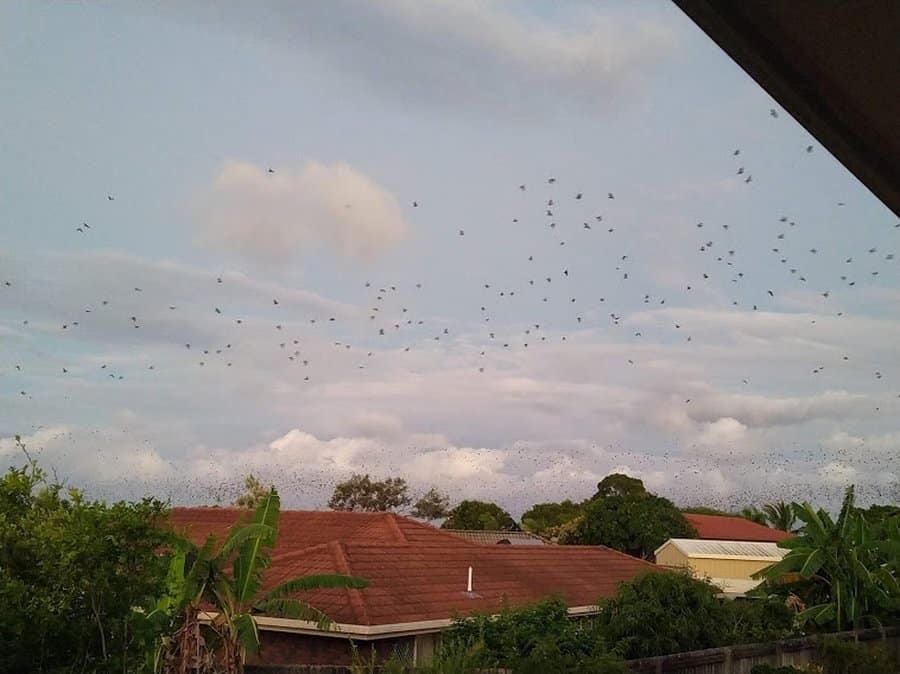 One of the most fascinating things about Australia is its various wildlife. From coast to coast, the country has an abundance of wildlife like crocs, kangaroos, dingoes, and much more.

It truly is interesting to learn about certain creatures that are known to frequent certain areas.

This is particularly true for the Hervey Bay area in Queensland. Hervey Bay draws visitors in for its pristine beaches, calm waters, and its own fair share of wildlife. One creature it is most notorious for is bats.

These creatures are quite remarkable and actually play a critical role within the ecosystems that which they live. Specifically, bats dwell in trees. They are most recognisable by how they hang upside down on tree branches.

They are known to do this both on the mainland in the Hervey Bay area as well as on Fraser Island.

Bats aren’t solo creatures. They are found in large groups called “camps”. These camps can have up to 200,000 members! In fact, there are plenty of videos on Youtube that have captured Hervey Bay bats taking to the skies.

It is such a crazy sight to see all of them swooping through the air! They are always found within the trees near a fresh water source and a food source.

The only reason that they venture outside of their normal locations is due to a lack of food sources. Some bats that are known to the Hervey Bay area have been as far south as Victoria!

There are three types of bats that can be found around Hervey Bay or Fraser Island. These include the Little Red Flying Fox, the Grey Headed Flying Fox, and the Black Flying Fox.

Each one is identified by specific physical features that make them different from other species. Below are some fast facts about each flying fox species!

This species of flying fox is known for its pollination activity. It is known to frequent the eastern coastline in search of flowering eucalyptus trees. They are only common in the area when these trees are flowering.

Once pollination season is over, they vacate the area. Physically, they have reddish eyes and reddish-brown fur. They only average about 300-600g in weight but can reach up to 1000g with a wingspan of up to 1 metre.

are different from other species of bats because they don’t rely on echolate features or ultrasound to navigate the world. They do have heightened sight, smell, and hearing.

At dusk, they depart from their group (or camp) in search of food. They have been known to travel up to 50km from their camp to find food. Primarily, they eat nectar, blossom, and fruit.

If they avoid certain predators like goannas, owls, or foxes (just to name a few), they can live anywhere between 8 to 10 years.

This species of a flying fox

was declared vulnerable to possible extinction back in 2001. Since then, it doesn’t appear that the status has changed.

These creatures are identified by their grey fur which has speckles of gold and silver throughout it and dark brown eyes. They can weigh anywhere between 600-1000g and reach between 230 and 289 mm in length.

Much like the Little Red Flying Fox, it also can travel up to 50km in search of food at dusk. Additionally, their life span is also similar. They are generally found in wet or dry eucalypt trees.

They are quite larger compared to the other bats found in the Hervey Bay or Fraser Island areas. This makes them a little intimidating to humans if they are sighted.

Their physical features include black fur (sometimes with a brownish tinge) and dark brown patches usually found on their neck and shoulders.

Also, like the Grey Headed Flying Fox, they can weigh between 600-1000g and have a body length between 230 and 280 mm. Their diets also include nectar, blossom, and fruit.

The habitats that this species as well as the Little Red Flying Fox and Grey Headed Flying Fox reside in will always be near some sort of freshwater source and food.

These species are known to extend outside of the Hervey Bay region, however, they are the three most common ones that can be found in the bay area. This includes Fraser Island as well.

Flying fox bats aren’t keen on interacting with humans. Generally, they stay in their habitats during the day and venture out for food at dusk and during the night hours.

While they aren’t known to seek out humans and pose an immediate danger, they can still be dangerous in other ways. The biggest way that they are dangerous to humans is if they are rabid.

is a serious virus for which there is no cure. Bats who have been infected by the virus can attack humans as rabies causes erratic behaviour.

Not all bats carry the rabies virus but flying fox bats have been known to have it. It is sometimes referred to as the lyssavirus. If it does become active in the bat’s body, this is where they pose the most danger to humans.

While rabies is certainly a valid concern, there are other ways that flying fox bats can pose danger to humans. Below are the other common ways that they are dangerous.

Other Ways That Flying Fox Bats Are Dangerous

Even though flying fox bats do not pose an immediate threat to humans, they can still be dangerous. People should always be alert to their surroundings and not interfere with areas where bats are known to have their camps.

Are Bats Protected In Queensland?

Bats are protected in Queensland

. This is primarily because of their impact on the ecosystems that they live in. This is particularly true for the bats that live on Fraser Island.

Some of Fraser Island’s flora, trees, etc are ancient and the bats play an important role in maintaining the ecosystem much like other creatures.

Bats are protected by the Nature Conservation Act of 1992. This act deems any interference or disturbance of a bat camp or colony to be illegal.

This includes moving the creatures, killing them, or other types of interference. People who do not abide by this act could face fines from the Queensland government.

Due to this, there are other species of bats that visit the island. The island is made up of an abundance of ancient rainforest trees and other types of vegetation that might attract the bats. This creates a wide variety of food sources for the bats.

Fraser Island is said to have anywhere between 12 and 18 species of bats. This number can easily fluctuate up or down depending on the bat species that make that their way to the island.

Overall, the species of bats that are found on the island are split almost evenly between fruit bats and bats that eat insects. This creates quite a diverse ecosystem on this flourishing island.

Bat sightings have been witnessed in the Central Station, Lake Mckenzie, and Lake Wabby parts of the island. This isn’t to say that they can’t be found in other areas.

However, they are found near these locations on the island because the rainforest is very close to the lakes and Central Station. The lakes provide the bats with the freshwater access that they need.

Bats might come off as scary to some people but these creatures of the night play a critical role in preserving important ecosystems in Queensland.