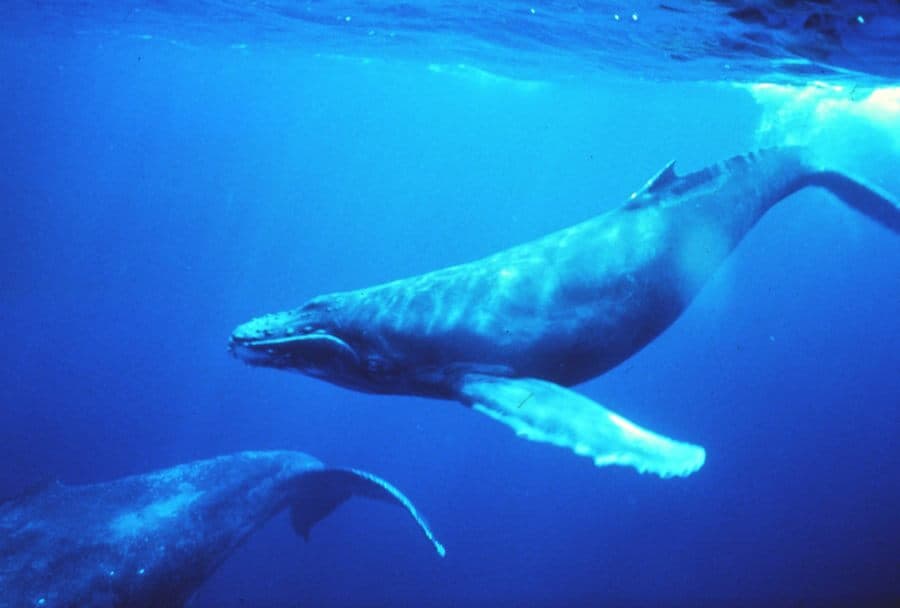 Humpback whales are one of the most interesting species of whales in the ocean.

They are known for their incredible size and playful nature. Humpbacks are said to reach about 15 metres (or about 47 feet) and can weigh in the thousands of tons.

However, continuous studies on these creatures prove to show that they are even more intriguing than people initially thought.

One of the most mysterious and mystical things about humpback whales is that they sing. Yes, you read that correctly!

A humpback whale’s ability to sing is an absolute riveting trait that they possess!

Other species of whales are known to create underwater sounds, but the humpback whale is one of the very few that are recorded as creating long, specific songs.

There’s a bit of mystery behind the purpose of the songs, however, throughout the years, scientists have been able to determine some facts. These facts help to put some perspective on this underwater phenomenon.

For many years, scientists have studied the strange occurrence of humpback whales singing. Because this event is so majestic, it simply draws people to it even more.

Below are some of the facts that been concluded by those who have studied the songs over the years.

Song Facts Of The Humpback Whale

It is fascinating to note that only male humpback whales actually sing. Because of this, it is often thought that they are serenading the female humpbacks.

However, there isn’t quite enough proof to support this theory.

Scientists have come up with a couple of theories throughout the years of why humpbacks sing.

This question isn’t answered easily though. As expressed, the males are the only ones who sing.

This has lead people to think that they are doing so to mate. While there isn’t exactly any evidence proving that it is done for mating purposes, there is evidence suggesting that it isn’t.

Oftentimes, other male humpbacks will join a singing male to collectively sing together. In nature, if a creature is attempting to mate other males do not partake in the activity.

It is often a competition for a female and due to the other male whales joining in on the singing, it shows that the singing isn’t for mating.

More evidence to support this includes the fact that when male whales join the singing it is at the same frequency.

If the singing were for mating and to impress the female humpback whales, the frequencies would differ as to set each male humpback apart from the others.

The Singing Is A Method of Locating Other Whales

While the purpose behind the singing cannot be directly pinpointed, scientists who have studied this behaviour think that it could be related to locating other whales.

Humpback whales might sing to ping their frequencies off of other songs being sung by their species. This bounce-back provides them with important information on where other humpbacks might be.

It is true that humpbacks generally travel in smaller groups, however, these groups can collectively be in similar water space.

A great example of this includes the Hervey Bay area in Queensland, Australia which is known as the “whale-watching capital of the world“.

Every year, large groups of humpbacks flock to their temperate waters to relax during their migration. It is estimated that about 1200 humpbacks or more can be seen in the surrounding waters.

Perhaps these whales use song to communicate during migration.

How Humpback Whales Produce Sound Is A Mystery

Because singing is such a fascinating phenomenon among this species, many studies have been conducted to try and determine its source as well as its purpose.

The method in which humpback whales sing is a bit of a mystery as well. But, this isn’t to say that there aren’t theories. Humpback whales have sacs that line their throat and vocal chord area.

Considering how they breathe, through two blowholes, it is possible that air is moved between these sacs while they are underwater.

This theory seems most plausible because humpbacks are known for holding their breath while under the water.

They are mammals, like dolphins, which require them to return to the surface periodically to retrieve more air for their lungs.

If air is in fact being moved between these sacs to produce the singing sound, it makes sense since they don’t technically “breath” under the water.

Singing requires a certain level of breathing and breathing exercises in order to produce sounds. Because of this, this theory could be possible.

Humpback Whales Can Sing For Up To 20 Minutes!

Humpback whales are known to sing for up to 20 minutes at a time.

While they are mammals that require resurfacing to gather more air, they are able to hold their breath under the water for anywhere between 45 minutes to an hour!

If they are singing, however, that time frame is reduced as they are using more of their stored air to produce these sounds.

Studies of their songs

have proven that humpback whale songs are layered sounds. A study conducted by Miriam Hauser-Jensen showcased this by witnessing the songs produce a complex system of layered sounds to complete an entire song.

It is thought that this system starts out as a shortened sound that grows into more interesting sounds.

Considering that humpbacks must return to the surface for air, this is an impressive progression of their songs.

Hauser-Jensen’s study also revealed the frequencies that these songs were able to produce. Moreover, this study also showed that the songs could be repeated various times throughout a 24-hour span.

Humpback Whales Singing Is Confused With Other Sounds

It is hard to believe that their extensive singing could be confused with other sounds they make, however, this is just the case sometimes.

Humpbacks are known to make vocal sounds for other purposes.

The most common one that is confused with singing is their mourning sound. Humpback whales make a moaning or whining sound when a member of their group has died.

It is often a prolonged sound that can be confused for singing.

They Switch Their Song To Match That Of Nearby Whales

Sure, each song a male humpback sings is a little different than others. This does make them quite unique.

However, when males come in close proximity to other males singing, they often change their tune to match.

This was examined before as part of the reasoning behind why the singing might not be related to mating.

The true purpose behind them matching the pitch and frequency of other whales’ songs isn’t exactly known either. No matter what, it sure is an intriguing occurrence.

These are just some of the most intriguing facts behind a humpback’s song. These creatures are truly fascinating from their size, to their habits, to the magical ways of singing.

Frequency can be found in all walks of life on earth, both in the animal kingdom and the human world.

Frequency refers to the number of sounds that repeat over a period of time. It is specifically measured in what is called “hertz

“, which measures these events occurring or repeating every second.

The frequency of a humpback whale song

is quite remarkable. It is recorded as reaching astonishing 4,000 hertz! It can range anywhere between 80 to that 4,000-hertz mark.

To really put this into perspective, this frequency is quite incredible especially considering how it resonates within the ocean waters.

When the song “resonates” it means that the sound that humpbacks are producing is deeper and ripple throughout the waters.

Moreover, some recent discoveries have even placed the frequencies to reach upwards of 8,000 hertz.

However, the average frequency for a male song in humpbacks will still stand up to 4,000 hertz, in most cases.

The singing of a humpback whale is said to travel an amazing 10,000 miles

Because of the distance that the song can travel, scientists have leaned towards the purpose of the song deriving from locating other whales.

This distance can help a humpback determine how far away another whale might be.

Combined with the frequency and layered sounds that are produced within the song, humpbacks might be able to really gauge other whale’s whereabouts.

It is suggested that only their lower-frequency songs travel the greater distance of 10,000 miles.

Songs are often detected at a smaller scale, around 20 miles (or 32km) for some of the louder instances.

No matter what, the song of a humpback travels further than anyone could possibly imagine.

Whatever the cause is behind this strange singing, humpback whales prove to be a massive source of interest for scientists.

Their behaviours are really quite interesting and the singing is purely a joy to experience and listen to!

From the sound of the singing to distance it travels, the song of the humpbacks is a continuing mystery!