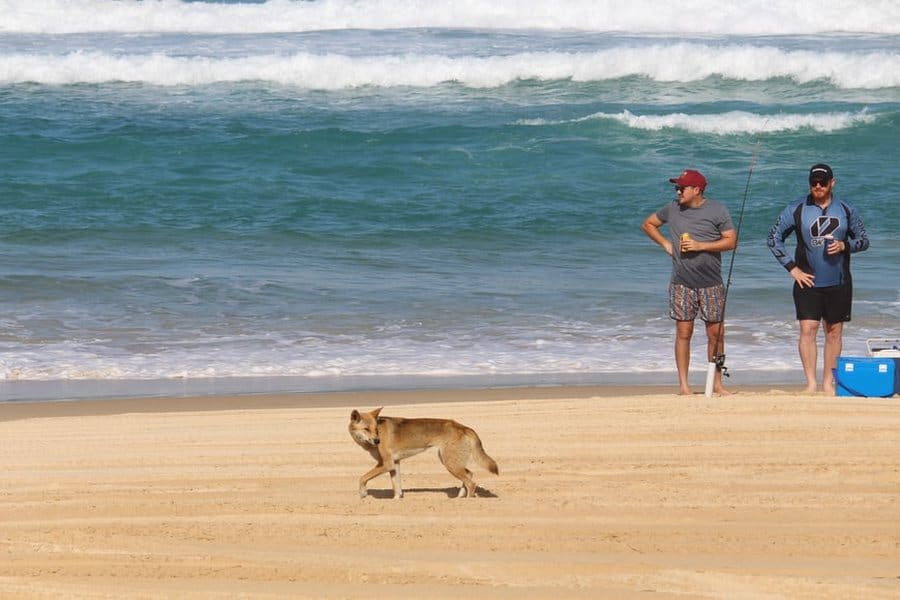 Double Island Point is an iconic spot in Queensland, Australia just south of Rainbow Beach and Inskip Point. It is known for great surf, diving, and stunning views of the ocean. However, Australia is well-known for having dangerous wildlife, especially dingoes.

Dingoes have a reputation for being threatening and can be seen throughout various parts of Australia, but what about at Double Island Point?

Double Island Point isn’t known for having dingoes. Even though there are dingoes throughout Australia, the biggest population is found on K’Gari Island, just north of Double Island Point. Dingoes aren’t going to swim from K’Gari to the mainland, but it isn’t out of the scope of possibility.

Even though dingo sightings aren’t common on the mainland, especially at Double Island Point, the sightings can still occur. This is why it is important to always be alert in the event that a dingo sighting might occur.

The history of dingoes

in Australia dates back more than 4,000 years. Dingoes were brought to Australia from Asia back then and the species thrived in the Australian ecosystem. Overall though, dingoes on the mainland have only been known to frequent the eastern side of the country.

As expressed, since Double Island Point is off of the eastern coast of Australia, it is highly possible dingoes were in the area when they were more prominent on the mainland.

Even still, as previously stated, sightings of dingoes on mainland Australia has significantly dropped over the years. This is primarily due to the efforts to keep them away from domestic animals. For the most part, dingoes are a threat to domestic animals and other wild animals due to them being an apex predator.

Visitors to Double Island Point shouldn’t worry too much about dingoes, however, it is never a bad idea to keep alert anyways.

How To Stay Dingo Safe At The Beach

If there were to be a sighting of a dingo around the Double Island Point area, it is likely they would be found near the beach areas. Dingoes aren’t usually just out and about. They stay hidden until it is time to locate food or water. The beach provides access to a food source for these creatures.

Tips For Staying Dingo Safe At The Beach

If someone happens to encounter a dingo at the beach, it is important to know some basic safety tips to avoid any accidents. Below are some helpful tips for staying safe during a dingo encounter at the beach (or anywhere)!

Do Not Let Children Out Of Your Sight

Dingoes are known for attacking smaller children. Because of their size, smaller children can be easy targets for a hungry dingo. Always keep children close to you and never let them out of your sight. While you may not directly see a dingo, they are fast creatures and can appear out of nowhere.

Do Not Leave Food Laying Around

Food attracts dingoes. Never leave open containers of food or food scraps lying around your spot at the beach. The scent of the food can attract them to your vicinity so keeping food contained is important. Throw away rubbish, food scraps, or uneaten food bits in proper locations.

Feeding a dingo is illegal and extremely dangerous. While it may seem cute at first, feeding a dingo can lead to big problems. If a dingo becomes dependent on humans to provide food, they lose their interest in hunting out prey and seek out humans to give them food.

Because of this, dingoes can become aggressive if they are trying to obtain food from a human. Generally, dingoes aren’t going to openly approach a human unless there is food involved or they are approached.

Keep Your Distance From Dingoes

If you see a dingo at the beach (or anywhere else), never directly approach them. Keep your distance and let them have their space. Approaching them could give them a wrong signal that you are trying to attack them or feed them. This could provoke them to become dangerous. As expressed, dingoes will keep their own distance unless provoked to do otherwise.

If you are fishing at the beach, bait can attract dingoes as well. This is especially true if you are using fresh bait as the scent draws them in. If you are beach fishing, keep bait and any catches safely covered to prevent dingoes from knowing you have anything.

Stay Calm When Encountering A Dingo

Encountering a dingo can be scary for a lot of people. However, if you do encounter one, always attempt to stay calm. If you panic or become disoriented, a dingo can sense this and will take advantage of the situation. Take slow, deep breaths to manage your demeanour and remain as calm as possible.

Keep Your Hands At Your Side

Another great tip for staying calm if you see a dingo (especially if it is approaching you) is to keep your hands at your side. Never wave frantically or make sudden movements. These types of actions encourage dingos to attack or pursue prey.

Do Not Go To The Beach Alone

Going to the beach alone is a big mistake, especially in Australia. There is marine life to worry about and of course land mammals like dingoes. Having a beach buddy ensures that there is an extra set of eyes to keep watch. Additionally, the extra person can reach out for help if there is an emergency.

Walk Slowly Backwards Away From A Dingo

If a dingo is approaching you, even if it doesn’t seem aggressive at first, you should walk away from it slowly, while facing the dingo. You want to keep eye contact with the animal so that you can see it.

Turning your back on a dingo makes you vulnerable and gives them an opportunity to attack you from behind. Walking backwards gives you an advantage and shows the dingo that you aren’t a threat.

Never Ever Run Away From A Dingo

Running from a dingo is the biggest mistake you could ever make. As brash as that sounds, it is the truth. If you run, they will chase you. It is simply part of their apex predator nature. You might think you are a fast runner but dingoes are quite fast and it is too risky to attempt escaping. Walking slowly backwards is the best approach.

Stand Up Completely Straight At Your Fullest Height

Standing at your fullest height by standing up completely straight makes you appear larger than the dingo. Because adult humans are larger than dingoes, they aren’t going to generally approach or attack a full-sized human. This is why children are often targets because of their small size.

However, grown adults can be targets if a dingo is provoked. Standing tall gives you a larger appearance which may deter a dingo from attacking.

These tips are essential for ensuring everyone stays safe at the beach against dingoes. While dingoes aren’t normally going to attack humans, it can happen so knowing these tips could help save someone’s life.

Double Island Point may not be known for having dingoes around every corner, however, they show up just like any other wildlife creature could. Because of this, it is critical to stay as safe as possible.