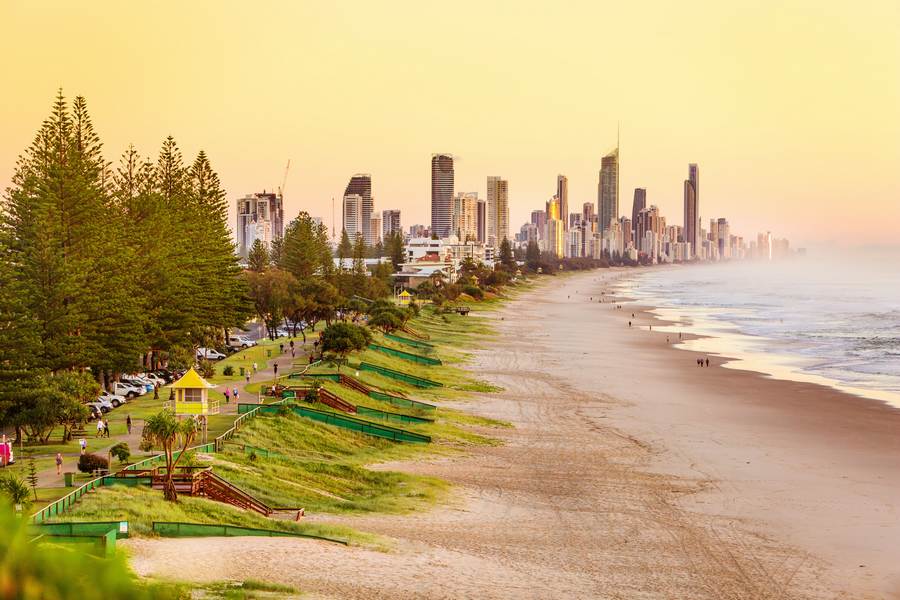 From coast to coast, Australia has some of the most beautiful places to live. Some areas are more sought-after than others. This is due to a number of reasons, but particularly because of the country’s stunning scenery and access to the local environment.

One popular area of Australia includes the Gold Coast.

However, the views of the ocean aren’t the only reason that this coast is an excellent place to live.

The area is the perfect mixture of nature and metro city life. The metro area hugs the coastline with the stretch of sandy beachfront while the more inland areas have forested areas that include waterway systems to explore. Moreover, the Gold Coast is just under an hour’s drive south of Brisbane, the capital of Queensland.

For people seeking a nice meld between city life and remarkable naturalistic scenery, the Gold Coast is one of the prime places to consider living in eastern Australia. Moreover, the coast simply offers an abundance of things to explore and do!

What Is It Like Living On The Gold Coast?

It Is A Surfer’s Paradise

The Gold Coast is known as one of the most iconic surf spots in Queensland. The beaches not only provide great fishing and swimming spots, but the whole vibe of the coast really does cater to surfers.

Almost every beach along the stretch of sandy shorelines on the Gold Coast has access to surfing. Considering that some of Australia’s beaches aren’t suitable for surfing, the Gold Coast really attracts surfers.

The Weather Is Pretty Close To Perfect

The Gold Coast sees almost 300 days of sun throughout the year. This makes the weather pretty close to perfect with warm temps almost year-round. Even in the cooler months, the Gold Coast is milder and warmer than other areas of the eastern coast.

This not only is a treat for its permanent residents but also for the tourists that come to see the stunning scenery.

The Atmosphere Is Very Laidback

Even with lots of city life around the Gold Coast area, it still has a relaxed atmosphere. The locals are friendly and truly embrace the rolling waves and long beach shorelines. From fishing to surfing to swimming, the overall vibe of the Gold Coast sets a pace that is tranquil and relaxing for its residents and tourists alike.

The Gold Coast Area Is Known For Its Nightlife Scene

While the overall vibe of the Gold Coast is relaxing, there is also another side that caters to those who need a little bit of action in their lives. The metro area of the Gold Coast is brimmed with nightclubs and spots to catch a few drinks with friends. For a younger crowd, this vibe is definitely more their pace.

There’s Entertainment Practically Around Every Corner

The Gold Coast might be known for its nature and stunning beaches, but its entertainment is also something to embrace. The area features amusement parks, (like Dreamworld, Sea World, etc), festivals, and more. The festivals are truly beloved by Gold Coast locals.

These festivals dive into local music, food, and even film. There is something fun for everyone!

Living on the Gold Coast in Queensland is a prime opportunity to have access to peace and quiet or a more fast-paced lifestyle. From remarkable views to endless entertainment, there’s nothing small or boring about this part of eastern Australia!

Why Is Everyone Moving To The Gold Coast?

With all the wonderful things that the Gold Coast offers, it shouldn’t be a surprise that more people are flocking to this eastern coastline. However, there’s more to it than just the entertainment, nature, and beach life.

People are seeking out the Gold Coast as a permanent place of residence because the area is affordable to live in as well. Moreover, the area has an abundance of job opportunities for its residents.

There are many suburbs throughout the Gold Coast region and they all offer affordable housing from rent to mortgage rates. Not only is the area known for its affordable housing and lower cost of living, but it also has a great job market from professional jobs to retail.

While the cost of living on the Gold Coast isn’t as low as some other smaller areas of the state of Queensland, it is still comparably lower than other major city areas in the state.

Between great housing options, job opportunities, temperate weather, and endless access to what makes Australia so beautiful, the Gold Coast is a wonderful place to live. There are many suburbs to choose from and the area overall isn’t that far from other notable places in Queensland.

It is just under an hour from Brisbane and just under 2 hours from the Sunshine Coast area, another popular coastline in Queensland. Residents of the area just have so much to see and do within their own region and within 2 hours of the region as well!