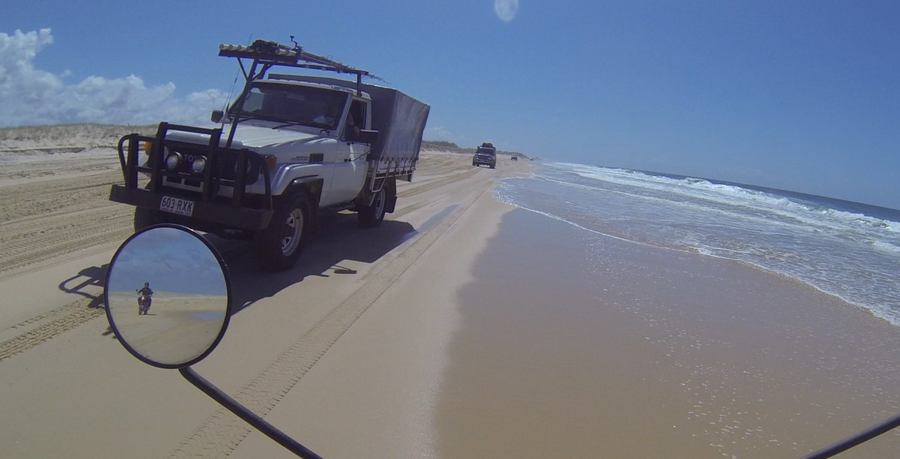 Fraser Island is Queensland, Australia’s most exclusive island. It is a popular word heritage site that boasts lush flora, ancient rainforests, and a wide variety of wildlife. Even though the island is known for its unique flora and fauna, it is more famously known for its sand dunes.

The sand dunes cover almost the entire island. Because of the amount of sand on the island, driving on the island is done via 4×4 vehicles. The sand simply isn’t suitable for other vehicles.

Driving on Fraser Island can be a bit of a challenge. The biggest culprit behind the difficulty is the sand itself. Sand is a pliable material that easily shifts around. It isn’t stationary and constantly moves when pressure is applied to it. Because of this feature of the sand is why 4×4 vehicles are the primary means of getting around the island.

These vehicles can handle the shifting sand whereas regular automobiles cannot.

has the capability of powering all four wheels simultaneously while 4WD

has two separate tyre axels that supply power separately rather than cohesively. This is a huge difference that makes 4WD more suitable for sandy conditions.

Are There Any Roads On Fraser Island?

The only roads on Fraser Island are within the two resorts on the island, Kingfisher Bay Resort and Eurong Beach Resort. These roads are paved and are able to handle 2WD vehicles. However, bringing a 2WD vehicle to simply drive around the resorts is sort of fruitless.

This might be attractive to some people, however, it is a waste of time. It is a better idea to have a 4WD and simply switch between driving on pavement and sand. This prevents people from being limited in their activities!

All other areas of the island are sanded tracks. This includes areas that lead up to key points of interest on the island like Lake McKenzie and more. In fact, some of those locations are best accessed via a 4WD.

This is why touring groups to the island use big 4WD buses that can accommodate carrying a lot of people and be able to withstand the sandy conditions. They can trek right to the key points of interest to showcase all that the island has to offer!

Is It Easy To Drive Around Fraser Island?

Many of the driving tours that offer 4X4 hire also offer driving lessons for those who aren’t used to being behind the wheel of a 4WD.

While driving a 4WD is similar to regular driving, it is very different at the same time. Because 4WD vehicles are meant for off-roading, they handle them differently than a regular car. One of the biggest tips for driving on Fraser Island (that will make it easier as well!) is lowering the tyre pressure.

Lower tyre pressure makes the tyres move through the sand much easier. It also prevents the tyres from becoming too bogged down. This isn’t to say that getting bogged down can’t still occur but the likelihood drops drastically.

The recommended tyre pressure for driving on sand is somewhere between 18-20 psi, depending on the vehicle itself. This lower tyre pressure should only be used on the softer sands that will inevitably shift during impact from tyres.

The sands that are closer to the shoreline of the driving area on 75 Mile Beach are hard, compacted wet sand.

It is a good idea to re-inflate tyre pressure to normal standards when cruising up the coastline. This ensures that driving through the wet sand will be as easy as possible with no slip-ups.

How Long Is The Drive Around Fraser Island?

Driving around Fraser Island is a unique, fun, and stunning way to explore the island. Whether it is through a driving tour or a personal vehicle, the benefits of seeing the island via 4WD are truly thrilling.

Generally, the drive around Fraser Island to all the sights to see (Eli Creek, Indian Head, Champagne Pools, the ancient rainforests tracks, etc) can take anywhere from 2.5 to 3 hours. This time will vary based on how long someone sticks around each location.

Considering that the island can be driven in around 3 hours or so, the island can be visited within a day. Although some would argue that seeing the island to its fullest is best done in a 2 or 3-day duration. This is particularly true for those that take guided tours where there’s a package deal of a 2 or 3-night adventure.

Either way, driving around the island is doable in a day.

It is important to note that even though 3 hours isn’t that long, it still is a chunk of the day. To really maximize the day, guests should plan to start their adventure fairly early. The barges and ferries to the island from the mainland generally start departures around 8 a.m. so attempting to head over there around there is ideal.

This ensures that guests have the opportunity to make the best of their day. No matter if someone is staying overnight or just going for one day, starting the journey as early as possible is the best way to explore the island.

Things To Keep In Mind While Driving Around Fraser Island

Any trip to Fraser Island is a fascinating one. There are such rich naturalistic aspects to witness as well as simply enjoying the great outdoors. The island isn’t short of things to see and do. While it is easy to get lost in the beauty of it all, it is critical to remember that there are still some things to keep in mind while driving around the island.

Below are the things to think about while driving on Fraser!

Important Things To Remember When Driving On Fraser Island

This includes the various wildlife on the island as well. Fraser Island is known for its dingo population and while dingoes might not be lurking in the driving areas it is important to watch out for them and follow speed limits so there’s time to stop.

On Fraser Island, Road Rules From The Mainland Still, Apply

Fraser Island certainly invokes a sense of freedom within its pristine beauty. However, people driving on the island shouldn’t get too carried away. All normal road rules that apply on the mainland are still applicable on Fraser Island. As expressed, police are present to enforce these rules against any unruly drivers.

This includes not driving under the influence, watching for pedestrians, driving on the left, and indicating when turning. Sticking to these rules is just as important as following the speed limits because it keeps everyone and everything as safe as possible.

75 Mile Beach is considered a beach highway. It gives 4WD drivers the opportunity to travel between the shoreline and the landscape which makes for a thrilling experience. Even though it is technically a highway, there are still pedestrians on the sand as well.

People flock to 75 Mile Beach to see the Maheno Shipwreck and Indian Head which are two of the most popular sights on the island. Because of this, staying alert and sticking to the speed limit and slowing down when needed are essential.

An additional way to be alert while driving on 75 Mile Beach is to be aware of the incoming tides. Checking tide times is an essential way to keep everyone safe. It simply isn’t safe to drive along the beach when the tide is high. Too many things could go wrong.

It is suggested that 4WD drivers travel along the shoreline within 2 hours of low tide times. This allows for proper clearance of any incoming tides.

Being alert isn’t just for 75 Mile Beach. Any travelling on inland tracks should be monitored as well. This is particularly true for wildlife, especially dingoes. Being alert is the best way to make sure that someone can stop if they need to stop.

Be Prepared Pack Your Essential Items

It isn’t possible to be completely prepared for whatever life throws at us. However, when heading to Fraser Island on a 4WD journey, being as prepared as possible is the best. Anything can happen. Bringing along a recovery kit is an essential way to stay prepared for 4WD driving on the island.

These kits generally include things like traction boards. These boards can be helpful if the vehicle becomes bogged down in the sand. They act as a means to give the vehicle traction to propel itself out of a stuck situation.

Remember To Only Drive-In Designated Areas On Fraser

There is sand everywhere on Fraser Island, however, driving on the sandy sporadically isn’t how it should be done. There are specific areas designated for driving. These areas are generally inland tracks or sand tracks that have been well marked and grooved out for access to various points on the island.

These tracks ensure that 4WD vehicles are travelling safe paths to and from different parts of the island. It is still an off-roading adventure nonetheless, this just makes it a bit safer. Additionally, it’s considered illegal to drive on the higher sand dunes. This isn’t only due to safety reasons but also to protect the island and its natural state.

Maintaining momentum is a crucial way to efficiently drive 4WD vehicles on uneven terrain, especially sand. Because sand is so flexible a loss of momentum can result in getting bogged down. This isn’t to say that people should be speeding.

Rather, people should be maintaining the speed limit where needed so as not to get stuck in deep grooved areas that might exist from shifting sand. Expert 4WD drivers can typically do this with no problem. People who are new to driving off-road might have a more difficult time doing this but making every attempt to do so is important.

Not all vehicles with 4WD capabilities have the feature automatically turned on when the motor is started. Sometimes, it is necessary to engage the 4WD for the wheels with the push of a button.

This is critical to remember so that the wheels do their part in navigating through rough surfaces. It will become quickly noticeable if someone doesn’t have it engaged but trying to remember before that happens is ideal.

Sudden turns can cause the vehicle to flip over or land on its side. This is particularly true if the vehicle is moving at higher speeds. Moreover, it can occur more on Fraser Island due to the sandy environment. The sand can shift when a sharp, sudden turn is made.

When this happens, especially when combined with higher speeds, it poses a risk for flipping. This not only puts a damper on the fun but will require a tow. Considering that access to Fraser Island is by ferry or barge, waiting on a tow could be quite time-consuming.

Driving on Fraser Island is truly a once-in-a-lifetime experience. There is so much natural beauty to witness while enjoying the thrill of being behind the wheel of a 4WD. While the sand does prove to be an interesting challenge for some drivers, driving on the island isn’t overly difficult.

This is particularly true when safety is put first and staying alert is being practised.

link to Can You Have Camp Fires On Fraser Island?

Fraser Island is part of Great Sandy National Park. In an attempt to protect its beauty, UNESCO listed Fraser Island as a protected area. This means that some actions are limited to protecting the...