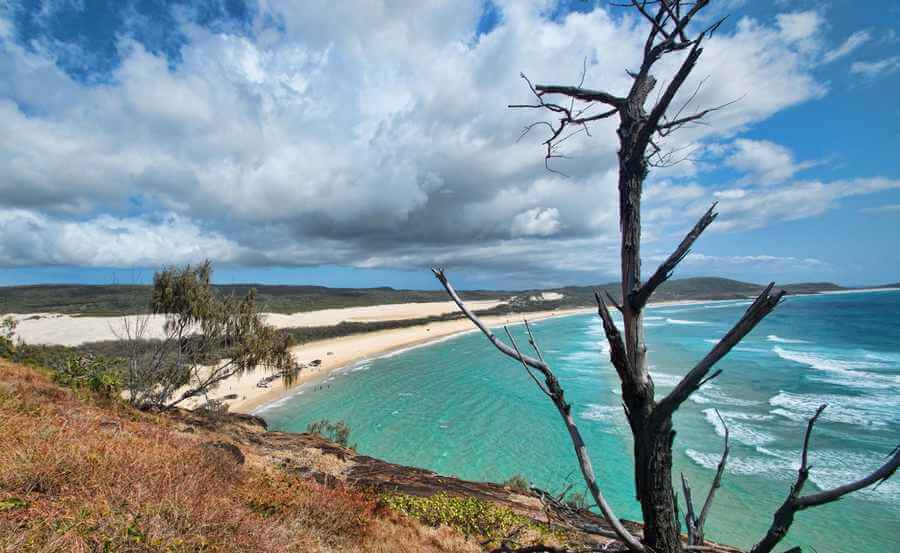 Eastern Australia is known for many iconic landscapes, especially Fraser Island. Tucked off the eastern coast of Australia, in the Coral Sea, Fraser Island offers guests some of the world’s most beautiful scenic views.

This is particularly true for its historic landmark, Indian Head. This landmark is located along Fraser Island’s 75 Mile Beach and is the most easterly point on the island.

Indian Head is known as a coastal headland. Coastal headlands are high coastal landforms that are identified by steep drops in their cliff, extreme breaking waves and rocky shores at their base.

With such heightened characteristics, this headland provides unbeatable views of the vast open ocean and mainland Australia. These panoramic sights aren’t the only thing to see on the headland.

Marine life is popular here and guests can see schools of fish, turtles, and even sharks or whales. This makes the experience even more desirable for a visit!

This weekend on the 4/07/2020 over on Fraser Island at Indian Head, at around 2 pm there was a fatal shark attack on a spear diver, in the waters of Indian Head at Fraser Island.

. Please take care when entering the waters of Fraser Island at all times.

Those who visit the headland will find themselves seeing such breathtaking views. The best way to access this area on Fraser Island is by 4WD. Considering that 75 Mile Beach is a popular 4WD area, to begin with, this wouldn’t be a problem for most people.

When at the base of the headland that is connected with the beach area, using the eastern side will provide the proper way to ascend to the top. In just 20 minutes or so, people can reach the northern tip of this headland.

When climbing up the headland, it is recommended that safety precautions be taken. The walk does include some scaling of larger rocks and some of the rocks are known to get a bit slippery during certain times of the year.

Proper footwear, such as boots, should be worn while visiting this iconic site. These suggestions are the best way to enjoy everything that the coastal headland has to offer!

Those who are into photography (and even those with good mobile phone cameras!) will find once-in-a-lifetime pictures can be snapped atop this cliff!

Fraser Island itself is a historical haven for Australia’s past. Indian Head is a huge contributor to the island’s history as well. It is said that the headland gained its namesake from Captian James Cook

, who was exploring all around the Australian area during the late 1700s.

When he was sailing past the coastal headland, he spotted some of the natives from the island on the cliff. In those times, most natives were simply referred to as “Indians“. Thus, “Indian Head” was implemented by James Cook.

The natives, who might have been associated with the Butchulla people, are said to have originally named this area “Tuckee“. The translation of this original name has not been confirmed one way or another, but it is said that it may indicate “stone“.

Considering the headland is a large stone cliff, this translation makes the most sense. Even though the coastal headland carries the “Indian Head” name across the world to this day, there is something special about keeping the historical original name alive!

Fishing is a favoured activity year-round all over Australia. However, this particular headland on Fraser Island is an exceptional spot for fishing enthusiasts to cast a line!

Specifically, fishing in this area is known as rock fishing. Rock fishing is fishing from the top of rock formations at the base of a headland. There is a certain thrill to being so close to the ocean air and rolling waves.

Those who enjoy rock fishing thoroughly enjoy the excitement as a whole!

To go rock fishing safely, proper shoes should be worn as the rocks can be slippery and choosing a rock that is as stable as possible is ideal. The overall experience of rock fishing is one of being totally emerged into nature.

This is one of the greatest experiences in Australia, however, Australia surely isn’t short of beauty to behold! With a great activity like rock fishing to partake in, what fish can be caught there?

Below are the top fish said to be available along the headland.

These are just some of the fish to expect in the waters around the headland. One of the greatest aspects of fishing is seeing what ends up on the other end of the hook!

Fresh bait is always suggested as it simply draws in fish much better. There are limits to what fishermen (or women!) can bag and take while fishing.

All size and bag limits that are currently in Queensland law must be abided by. These limits are set to ensure the upkeep of fish populations and act as a means of preserving the various ecosystems in Australia.

Speaking of the fish population, tailor fish are highly protected off the shores of Fraser Island. This is especially true in the coastal headland area off of 75 Mile beach stretching all the way to Waddy Point.

The island prohibits fishing in this zone from the 1st of August through September 30th. This no-fishing zone is implemented as a means to protect the tailor population.

During those specific dates, the tailor fish are known to spawn and restricting the fishing here ensures that the tailor maintains their sustainability.

Camping is another beloved Australian activity, both on the mainland and Fraser Island. Camping on Fraser Island requires permits. Obtaining a permit is done online or through an agent.

Rangers on the island do not administer any permits for camping. Specifically, camping at Indian Head is not generally allowed. However, right behind the headland are fishing units available for booking.

These fishing units are ideal for those going rock fishing and provide small, yet comfortable areas that are self-contained. There are onsite stoves, fridges and freezers available.

Cooking up some fresh fish is the perfect dinner in these accommodations. While traditional camping is not allowed along the headland, these units are a small chunk of relaxation for fishers!

Whether it is fishing, staying at the small fishing units, capturing some great photos atop the cliff or witnessing the various marine and wildlife, the headland is wonderful to visit! It is one of the most gorgeous areas on Fraser Island and is accessible to anyone!