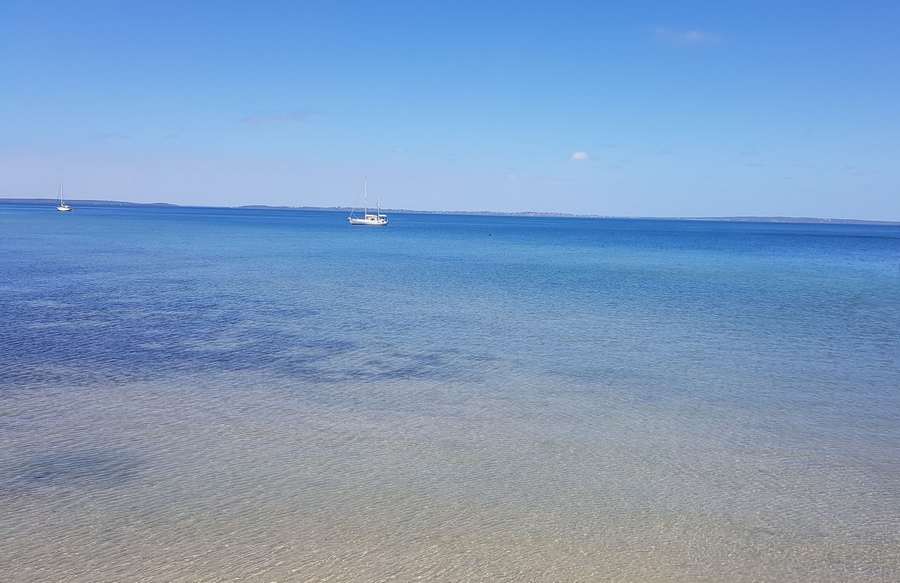 If you’ve been to the beach before, you know just how peaceful soaking up the sun, getting in the water and cooling off can be.

Taking a beach day and getting into the water can bring more than you anticipate in some locations. Fraser Island is one of those places that can pose significant risks for the unprepared visitor.

So, given the risks, can you swim in the sea at Fraser Island? This is your complete guide to understanding the dangers that Fraser Island can bring upon the unwary visitor.

Fraser Island offers many lakes to swim in, Swimming in the sea has many warnings do not swim here. There are just too many dangerous sharks and rip tides that can carry the best swimmers out to sea. The Beaches are not patrolled by lifeguards and are extremely dangerous for swimming.

The plentiful Marine life, thunderous riptides, and the absence of lifeguards are just some of the reasons to steer clear of the gorgeous yet violent beach.

Swimming At The Largest Sand Island In The World

located off the southeastern coast of Queensland, Australia.

. It is thought to be the largest sand island in the world. Fraser Island is home to the native Butchulla tribe

who refer to the island as K’gari which means “paradise“.

Fraser Island is renowned internationally for its rich rainforests, stunning lakes, and famed 75 miles of coastlines that surround the island.

With around 100 of the cleanest freshwater lakes on the planet and fascinating rainforests, Fraser Island is a hotspot for Australians and tourists alike looking to get away from the city.

Enjoying “paradise” as the Butchulla has for at least 5,000 years does not come without its difficulties, however.

Potential Threats While Swimming In The Sea

First on the list is wildlife. As much as humans like Fraser Island, it is also a popular hangout spot for great white sharks.

As recently as July of 2020 a spear fisherman

was fishing off the coast of the island tragically died from a shark attack. Attacks like these are not uncommon and shark sightings are far more common.

A 2010 Australian film titled, “The Reef

” is about a group of friends who decide to go out on the water and unknowingly become hunted by great white sharks.

Though fictitious it is no mistake that the film used Fraser Island as its setting. The producer’s decision to film on Fraser Island is not without reason.

Fraser Island is known for its shark population. Taking extreme caution is suggested as becoming shark prey can very quickly become your reality.

Fraser Island waters are also home to the Bluebottle

. As its “blue” name suggests, the colour of the jellyfish is difficult to see because it is camouflaged by the blue ocean around the island.

While not lethal, the sting of a bluebottle jellyfish is painful and is a common danger to visitors to Fraser Island. Tens of thousands of bluebottle stings are reported annually.

The Irukandji jellyfish is very small in size but is one of the most venomous jellyfish in the world. While fatalities from its sting are uncommon, the jellyfish is responsible for sending many beachgoers to the hospital with serious burns.

Both of these jellyfish pose a problem as they float near the shore and their tentacles are believed to be harmful even if they are dead.

What If You Need Professional Help Swimming?

Fraser Island has risks that reach beyond its wildlife, however. First of all, there are no lifeguards on duty at the beach. Fraser Island is known to have a powerful riptide and rough, choppy waters.

This poses problems as the water can pull you unpredictably and violently down under, which can lead to drowning. The lack of lifeguards can be an indication that the waters are too rough for swimming.

With no lifeguards on duty, there is no one to caution beachgoers about changes in the riptides as well as dangers from the crashing waves. Importantly, there are no lifeguards to save swimmers or to perform lifesaving techniques for swimmers when needed.

Another issue is access to medical services. While there is generally not a doctor available on the island, there is however one resident paramedic located on the island.

With the constant threat of great white shark attacks and dangerous, venomous jellyfish stings, the availability of timely, effective medical attention cannot be relied upon.

Without a hospital nearby, the only way to receive thorough medical care is through evacuation via helicopter to an inland hospital. Helicopter evacuation takes more time which may be too late for some serious medical needs.

Tips For Safe Swimming Spots In The Sea

On a positive note, there are designated swimming spots such as Champagne Pools which are considered to be natural jacuzzi pools due to their high temperatures from nearby volcanic rock.

With natural hazards, such as sharp rocks along the coastline, being slammed against a sharp rock by a powerful wave can lead to serious injury and even death in some cases.

While on one hand, you read the rave reviews about its landscape, nature, and beauty, and possibly read about families who have taken a vacation there.

On the other hand, you have read about the potential and very real dangers Fraser Island beaches bring that have some giving it the title of, “The most dangerous beach in the world

If you’re adventurous like me you may still be wondering, “Can you swim in the sea at Fraser Island?”.

The answer is no. But if you’re still thinking of taking a trip to “paradise” as it has been dubbed for over 5,000 years, there is a wealth of other options for enjoying the island.

We, like so many others, simply recommend AGAINST swimming in the sea at Fraser Island. While Fraser Island can be an unforgettable trip with its stunning landscape and picture-perfect beaches, it is important to remain cautious at all times while near the water.