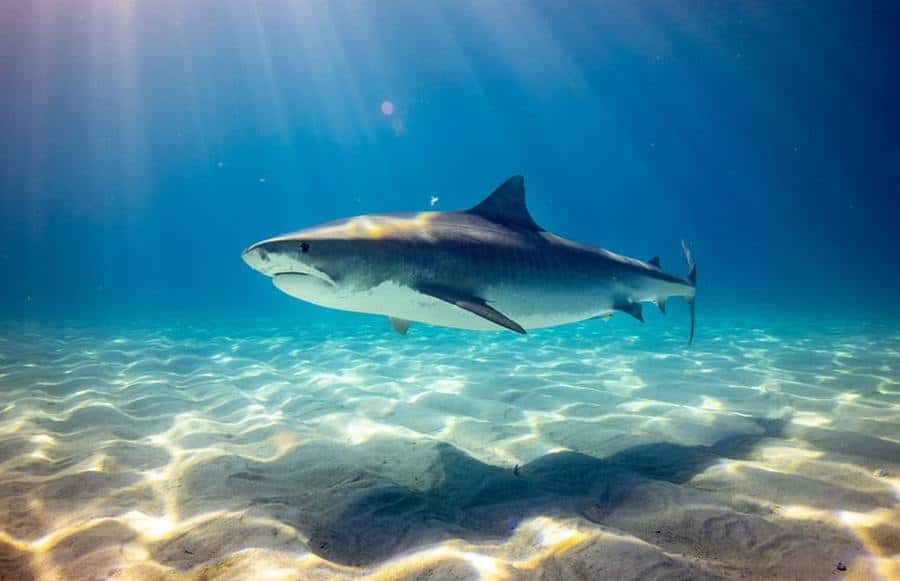 Sharks are one of the most impressive creatures on the planet but, of course, they have a frightening reputation. Shark attacks on humans are very rare, but they do happen. Spotting sharks from a distance can be fascinating but most people wouldn’t want to get too close to one in the water.

Sharks are common in the waters of Queensland, but they do have certain spots and routes that they prefer. If you’re thinking of visiting Tin Can Bay and are wondering whether there will be sharks there, we’ve got you covered.

Are there sharks in Tin Can Bay? Yes, there is a shark population that frequents Tin Can Bay. Bull sharks are common in the area, as are tiger sharks. Leopard sharks are often found in the reef areas that are popular for fishing. There have been no reports of shark attacks in Tin Can Bay.

So sharks are a common sight around Tin Can Bay which, depending on your point of view could be a good thing or a bad thing, but let’s take a closer look at what sort of shark activity you can expect when you visit.

There are definitely sharks in Tin Can Bay. They often end up there after travelling along the shark highway between Inskip Point and Fraser Island, They are drawn to Tin Can Bay because of the abundance of fish in the area, which makes it the perfect feeding ground for them.

This can cause some issues for people who are trying to fish because they and the sharks are competing for the same fish. It does mean that swimming in the water needs to be done carefully.

Sharks tend to feed more often at dusk, dawn, and when it is overcast, and if you see a school of fish in an area where there are sharks, there is always a chance that a shark will be nearby waiting to catch its prey.

What Types Of Sharks Are Around Tin Can Bay?

The water around Tin Can Bay is remarkably fertile with fish, which is why it is such a popular spot for fishing. And this abundance also means that a variety of shark species will be attracted to the area as well. The most common sharks that you will find around Tin Can Bay are bull sharks, tiger sharks

The number of sharks varies depending on weather conditions, how well the shark breeding season has gone, and the behavior of the fish. So there will be some times of the year where there are several reports of sharks and then other times when the sharks rarely make an appearance.

Leopard sharks are often found in the reef areas in Tin Can Bay and are mainly just an annoyance for people trying to fish. They pose absolutely no danger to humans and they are a popular addition to aquariums because of their striking spotted appearance.

But there are other sharks around Tin Can Bay that are more than just an annoyance, and can actually pose a danger to humans.

Bull sharks are considered the most dangerous shark to humans. This is because they are so aggressive in nature and that they are also able to travel from saltwater to freshwater areas where humans are more likely to be, and in shallow murky water where they are hard to spot.

With that being said, there is no evidence at all that bull sharks ever actively hunt humans. Each year around the world, there are only between 65 and 80 shark attacks by all species of sharks and there are usually fewer than 10 deaths.

There are some keen shark fishers who like to fish at some of the nearby beaches to Tin Can Bay and they have caught bull sharks as big as 3 meters. The fishing is only done for sport and the sharks are released after being caught and measured. Bull sharks are usually more active at night, which is why they aren’t seen very often during the day.

Tiger Sharks In Tin Can Bay?

Tiger sharks get their name because they have stripes when they are young, although these fade as they get older. They are second only to great whites in the number of attacks on humans. Although shark attacks are very rare, tiger sharks make up a big percentage of the small number of fatal attacks on humans.

This is because they are indiscriminate with their food. While most sharks who accidentally attack a human when searching for food will let go and get back to hunting for fish, tiger sharks will eat just about anything they can get. So they will continue the attack when other sharks would not.

With that being said, tiger sharks very rarely do attack humans, and in some places in the world, there are companies that will let you swim with them. While they do frequent reefs and other areas where humans can often be, they are nocturnal hunters, so you would be unlikely to spot one in the daytime.

There is a large population of tiger sharks in and around Tin Can Bay and they are spotted from time to time from the shore. They are also a popular shark for fishing, and they can be quite a challenge because of their larger size.

Sharks are part and parcel of the natural habitat of the waters around Tin Can Bay. Everyone should always be wary of sharks, and especially the bull sharks and tiger sharks that frequent this area, but the reality is that shark attacks are very, very rare. And there have been no reports at all of any shark attacks near Tin Can Bay.

There are some shark fishing enthusiasts in the area who like to go out at night to see how big a shark they can catch but, for most people who spend time near the water during the day, it is really unlikely that you will come across one.

More Pages On Tin Can Bay