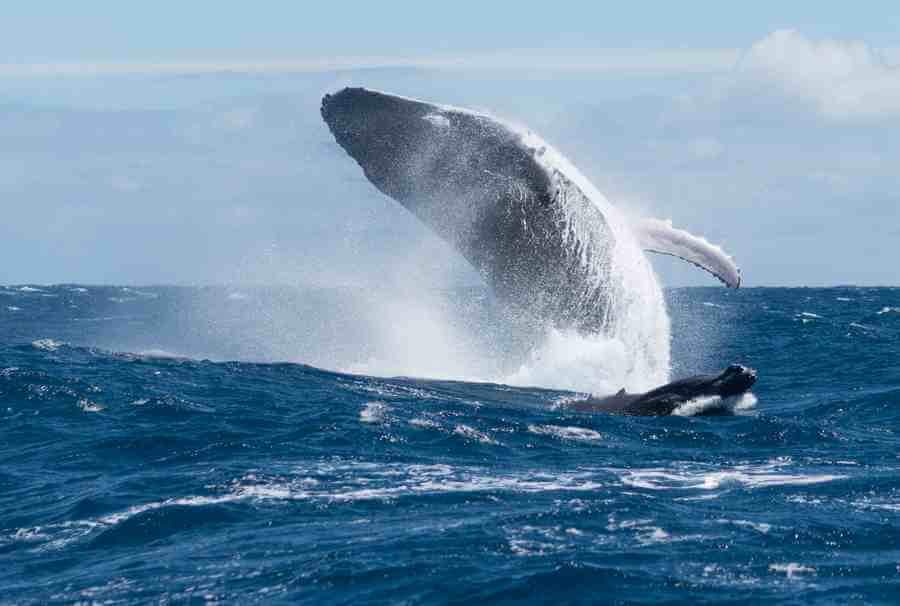 Hervey Bay is a stunning section of Queensland known for its string of coastal towns along the eastern coast of Australia. It has quiet beaches, access to world heritage sites, fishing opportunities, and so much more. However, what Hervey Bay is most known for are whales.

The region attracts a large number of these magnificent creatures every year. It is a phenomenon that is cherished by residents and sought out by tourists. But just how many whales flock to Hervey Bay’s shorelines every year?

The waters around Hervey Bay are truly ideal for the whales due to the calmer waters and excellent temperatures. Most of the time, these whale pods (as the group of whales is known) include younger calves. These younger calves are known to be quite entertaining to watch explore the beautiful waters.

Both younger and older humpbacks find the waters of Hervey Bay to be perfect for putting on a show. They often appear acrobatic in their aquatic jumps through the waters. It really is mystical to see the large number of whales moving through the water together.

Even though it happens every year, visitors who witness the whales in Hervey Bay enjoy it anew every single time.

How Many Whales Come To The Shallow Waters of Hervey Bay Each Season?

The best way to experience watching the humpbacks enjoy Hervey Bay’s waters is by one of the many tour boats. However, it is possible to see these creatures even more up close. While it is true that the whales can be seen jumping through the air from certain shorelines around Hervey Bay, they have been known to come even closer.

As recent as 2020, sightings of humpbacks close to Torquay Beach were reported. They were supposedly spotted near the pier off the shore heading towards Point Vernon. This is an unusual occurrence and not very typical of humpback whales. Due to this not being a common occurrence, there isn’t a pinpointed amount of whales that make their way to the shallow waters around Hervey Bay.

Typically, the up-close encounters are via the tour boats. Humpbacks are naturally curious whales and their acrobatic nature through the water is best to witness aboard one of these boats. Humpbacks are known to swim pretty close to the boats and even splash near them as well.

This is quite an experience compared to seeing them from shore as guests are quite a bit closer to the creatures.

What Is The Best Month For Whale Watching in Hervey Bay?

These are the months where the humpbacks are headed north to much warmer waters. Hervey Bay and its calming water with decent temperatures, even in July, prove to be preferred by the whales during their journey. However, the best month to see the humpbacks is August.

August is the best month for seeing the whales because it is a pinnacle time in their migration. Enough whales have made their way up the eastern coast to really start filling Hervey Bay waters. Most whale tours services run from August through October, although others are known to start in July.

The Hervey Bay area even hosts an ocean festival that celebrates the whale’s migration. The festival has various events through July and August to help showcase the importance of the ocean around Hervey Bay to the humpbacks.

Guests can not only enjoy the opportunity to spot the whales but also music, food, and other various events. The festival is an excellent way to embark on celebrating the whales! Below are some examples of the events that the festival hosts!

How Long Do The Whales Stay In Hervey Bay?

The migration of the humpback whales occurs from late July until October. During this time, whales are moving through the waters around Hervey Bay (and even the Whitsunday Islands) making their way to the northern waters. Generally speaking, the whales stay in the whales throughout this time but they aren’t at a stand-still.

Whales move in pods through the Hervey Bay waters, passing by Fraser Island. They can stay anywhere from 10 days and up to 2 weeks at a time. The pods of whales that stick around for up to 2 weeks usually have baby calves among them. The baby calves feed and play in the protected warmer waters.

The humpback whales give the newborn calves the opportunity to really enjoy the pleasant waters of Hervey Bay.

Either way, with such a large number of whales spread out from the coastline around Hervey Bay, there’s almost always a chance to spot them performing their jumps in and out of the waters.

Seeing the humpback whales up close is an event that can’t quite be described. It is a thrilling time to see these massive whales interact within their natural environment. There simply is nothing quite like it. In fact, the whale-watching at Hervey Bay was recently recognised as being the world’s first Whale Heritage Site, which is quite an honourable title.

This title was given to Hervey Bay due to the number of whales that flock to the bay area as well as the prime opportunities that are available for visitors to see the whales.

Whether it’s onshore or by tour boat, making the journey to experience this yearly phenomenon is a must. Humpbacks are one of the world’s most cherished whale types and they are so exciting to watch when they make an appearance. Hervey Bay will always be the pinnacle of places to watch them year after year!

Song To The Ocean

Song To The Ocean is an event where guests can hear many different musicians playing music among the ocean. It is a stunningly beautiful event that embraces the serenity of humpback whale season.

There are usually up to 30 musicians and the event is made possible by the Fraser Coast Tourism And Events, the Fraser Coast Regional Council, Australian government with Regional Arts Development and Festival program.

Blessing Of The Fleet

This traditional event is a truly cherished one at the festival. It is held on July 31st and is meant to ring in the whale-watching season with many blessings. There are food stalls, Butchella welcomes and chants, as well as other family-friendly events.

This yearly tradition happens at the Hervey Bay Marina because the blessings are meant to bless the various fleets as well that might be serving as touring boats for whale-watching.

The Whale Parade is an exciting, festive parade that encourages guests to dress up in honour of the whale-watching season. The intersection of Franks Street and the Charleston Esplanade and extends to the Seafront Oval in Pialba. The parade is also interactive for guests as they are encouraged to build their own themed floats.

This gives guests the opportunity to be a physical part of the parade instead of just watching it.

Family Day is an abundance of activities for the whole family to enjoy. There are children-friendly rides, food vendors, live music, and much more. Between the parade itself and the excitement at family day, this beloved festival is a great way to enjoy the whale-watching season!

Paddle Out For Whales

In early August, the Torquay Jetty fills up with kayaks and paddleboards. This yearly event is organised to help remember the importance of whale conservation and the ocean itself.

Many gather upon their kayaks and paddleboards to journey into the ocean in a circular pattern to give their moment of silence to the whales and ocean. Those wishing to participate can register on the festival’s website

is a delicious way to enjoy local, fresh seafood dishes. In early August, this festival runs from 10 a.m. to 5 p.m. and features an abundance of fresh seafood meals. In addition, there are local musicians as well as regional beer and wine.

The overall experience helps guests capture local tastes while enjoying the start to whale-watching months. Tickets are only $10 for adults and $5 for children 5 and up (children under 5 are free).

Click Here For Current Prices On All Whale Watching Tours

link to What Is The Best Whale Watching Tour In Hervey Bay?

Continue Reading
link to Can You See Whales From Fraser Island?

Whale watching should be on everyone's bucket list. Watching whales in their natural habitat, interacting with each other, and jumping majestically out of the water can honestly be compared to...