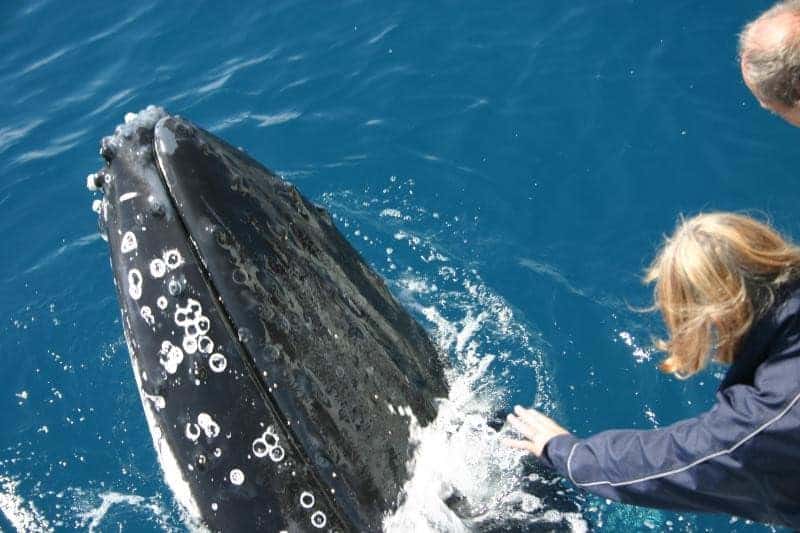 Humpback whales are one of the grandest creatures in the ocean. These incredible creatures might live in the ocean, however, they are considered mammals just like dolphins.

Since they are mammals, they do not have gills like other marine life which makes their breathing a little trickier.

From their massive size (up to 16m or 52ft in length and over 30 tons or 33 short tons), playful natures, and interesting way of breathing, humpbacks are truly fascinating!

While their size is surely one of the most interesting things about them, their breathing is also a compelling thing to examine.

Like dolphins, they don’t have gills. Instead, both whales and dolphins alike have blowholes that are on the top of their heads.

The presence of this blowhole really gives insight into how humpbacks are able to breathe while still lingering within the waters. Because of their large size, humpback whales have two blowholes.

Dolphins, who are also underwater mammals, only have one blowhole. The reasoning is pretty obvious because they are only a fraction of the size of a humpback whale.

The number of holes that a whale will have depends on the type of whale that it is. Humpback whales are a baleen whale type.

This means that they have plates in their mouth, rather than teeth, that are used for swallowing their food whole.

Humpbacks are known for eating plankton most of the time, but they can eat larger fish. All baleen species of whales will have two blowholes.

The other type of whale classification is toothed whales. As the name implies, these whales have actual teeth.

While they chew up their food unlike the baleen whales, they only have one blowhole very similar to dolphins.

Humpback whales are mammals and must breathe air to survive. This is why they have blowholes atop their head. These blowholes play a very critical part in ensuring that the whale gets enough air.

Humpback whales must surface every so often to get air in their blowholes. But how exactly does a blowhole operate? When the humpback requires air, they simply stick their heads just above the surface.

At this point, their blowholes retract to take in as much air as needed. From there, the air is transported to their lungs.

These blowholes are truly a fascinating part of their anatomy. It allows them to pretty much stay submerged under the water while still getting the air they need to breathe.

Oftentimes, these blowholes can be referred to as their “nostrils” which while it sounds funny, is a pretty accurate description!

As expressed before, humpbacks are not able to directly breathe

under the water. They are considered mammals. The reason they are labelled as mammals lies within their need for air since they have lungs.

They also give live birth to their young, have a tiny amount of fur about their bodies, and are able to produce milk for their offspring.

Considering that they are an ocean-dwelling species, this can be a bit hard to envision.

However, it is one of many reasons that humpbacks (and other whales) are alluring to study. However, even though they cannot breathe freely under the water, they can hold their breath under the water.

Holding their breath under the water is really important because they are still mammals residing within the depths of the ocean.

The first being that they are creatures of the water even if they do have lungs and are technically mammals. The second reasoning is because of why they dive deeper into the ocean.

The only reason that humpback whales dive deep into the ocean is to collect delicious food. Deeper ocean areas provide a variety of foods for them to snack on.

So in reality, they only need to be able to dive deep to hunt for specific foods.

How Long Can A Humpback Whale Hold Its Breath Underwater?

Humpback whales have been known to hold their breath

underwater for up to an hour and as little as 10 minutes.

Generally speaking though, they will hold their breaths underwater for around 45 minutes at a time. At that point, they must resurface for more air intake through their blowholes.

Even still, that is a really long time to hold one’s breath!

Considering that they live in the water but still need air to breathe, their internal anatomy is quite remarkable.

Their respiratory systems are quite strong giving them the ability to breathe as needed and even hold their breath for longer periods of time.

With the need for air, people often question how humpbacks, or whales in general, sleep.

Perhaps how they sleep is even more intriguing than their breathing or size! Some scientists believe that humpback whales are able to control parts of their brains while they are sleeping.

Since they have to remember to breathe (or go up for air), it is suggested that they partially sleep and still periodically go to the surface for air. Moreover, these creatures do not sleep for long periods of time.

In fact, they are only known to sleep in increments of around 30 minutes. This could be directly related to their need for air supply but it is quite for certain.

Due to their blowholes and unique way of breathing, humpbacks have what is called a “breathing cycle”.

This breathing cycle is a part of their everyday routine and is critical for keeping them healthy and maintaining their lives under the water.

, however, they aren’t bothered by it.

It is an instinct for them and simply a part of their lives. So what exactly is their “breathing cycle”?

A humpback’s breathing cycle starts with them being able to spurt out of their blowholes about 2 times per minute while at rest.

From this point, they can increase that time frame to up to 8 times per minute when they dive deeper into the water.

They come up for air about every 6 minutes and each time they do so, they intake more air into their lungs.

With this process, they can store air in their lungs to help with holding their breaths under the water for long periods of time.

This breathing cycle also allows for them to release a double stream of water spray through their blowholes. This stream is said to reach upwards of 13ft (or 3 metres) in the air!

For places in the world where whale watching tours occur, this is quite the sight to behold! Humpback whales are really popular in places in Australia when the whales are on their migration journeys.

The tropical waters here are idyllic for them to relax and play. Those who venture on these whale watching tours get a unique opportunity to see these curious creatures and their breathing habits!

How Big Are A Humpback Whale’s Lungs?

While humpback whales are one of the largest whales in the world, their lungs

aren’t as big as one would think.

Instead, the real secret to their prolonged dives and ability to hold their breath between 45 to 60 minutes lies within their ability to store oxygen within their circulatory system.

This storage of oxygen is another reason behind their ability to dive deep for long periods of time. Since their circulatory systems are directly related to their lung function, the excess oxygen on long dives is critical.

Deep diving isn’t safe for mammals with lungs, as decompression can happen where gases in the depths of the ocean can create serious issues.

This is the primary reason behind their lungs being smaller than one would think, combined with their ability to have around 75% oxygen surging through their systems.

These magnificent creatures are said to dive down about 200m (or 656ft) at any given time.

While this seems quite significant, and it is, they aren’t hanging out at these depths for too long. Generally, their deeper dives will only last around 15 minutes.

This is even considering that they can hold their breath for longer periods of time. Simply put, they don’t have a direct need for staying submerged for too long of a time period.

Most of the time, humpbacks (and other whales) will spend more time closer to the surface of the water so that they can regenerate their air as needed.

Moreover, they can be seen lounging along the surface of the water as well. As expressed before, they only need to expose the tops of their head to allow their blowholes to release and gather air.

They are known to linger about with their heads poking up from the surface. This gives them a truly relaxing environment with constant access to getting the important air that they need to maintain their lives under the water.

Humpback whales are one of the ocean’s many alluring creatures. From their size to their breathing and everything in between, they are truly remarkable!