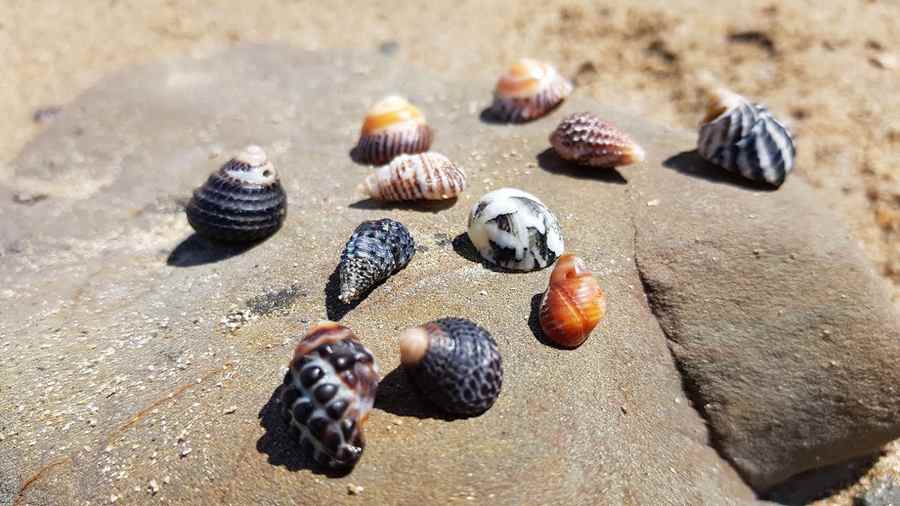 Australia is a beach paradise for anyone who enjoys the ocean and sanded waterfronts. With literally thousands of gorgeous beach areas around its coastlines and surrounding islands, Australia has plenty to choose from.

When heading to the beach, one of the most popular activities is searching for seashells. Seashells are unique treasures from the ocean. They are colourful shells that are primarily made by various seafaring creatures.

Depending on the species will ultimately determine how the shell looks. This is what makes finding them so much fun!

But where are the best spots in Queensland, Australia for finding seashells? Queensland is known for its pristine and calming beach fronts. Seashells tend to be brought to shore by various currents or tides.

They wash up along the shorelines, sticking into the sand. Even with calming waters, Queensland has some areas where shells can be found!

Collecting seashells in Australia is a highly protected activity. This is due to the various wildlife and marine life that occupy the country and its surrounding waters.

A lot of Australia, including Queensland, has national marine park areas. These areas are heavily protected to preserve the wildlife and ecosystems contained within them.

The seashells in these areas should not be removed as this disturbs the fragile ecosystems that are associated with the beaches where the seashells are found.

While collecting is prohibited and regulated, it doesn’t mean that seashells cannot be enjoyed. In fact, the hunt for these majestic pieces of nature is quite fun!

The admiration of their naturalistic beauty is what makes them truly remarkable. Photography is one of the best ways to ensure the capturing of seashell sightings. This is the safest and most responsible way to experience seashells.

There is something truly beautiful about the sight of these uniquely coloured and shaped shells against golden or white-sanded beaches.

When it comes to precise beaches in Queensland, Australia has many that it can offer you will see some of the best sights in shells found here, the luck is in the find! Seashells can wash up on any shore.

located off of Hervey Bay and Fraser Island. These areas can get some interesting shells that wash up onshore.

Another area where some seashells may be found in Queensland includes Mon Repos beach in the Bundaberg area. While this beach is most notoriously known for its cute nesting sea turtle population.

However, the turtles aren’t the only thing to see. There have been some gorgeous seashells found along this beach.

Beaches in Brisbane, Queensland are also known for seashell treasures. In fact, Brisbane is known to host an annual Shell show. This puts some of the prettiest shells found on display for people to admire.

Some of the beach areas in Brisbane include Redcliffe Beach and Margate Beach to name a few. Once again, when it comes to finding seashells in Queensland, the hunt is where all the fun is found.

There are even seashells found on the various islands in Queensland, including the famous Whitsunday white beach haven which is part of a cluster of over 70 islands.

What Types Of Seashells Are Found In Queensland?

Seashells come in so many shapes, sizes and colours. This is determined by the species of the marine creature. Each one has secretions that they release that harden into various swirls and intertwining colours.

They can be called nature’s form of artwork. As for shells found in Queensland, there is quite an impressive amount of marine species subgroups that have been identified throughout the years.

More specifically, there are said to be around 38 family types of shell identifiers. Below is a list of some of the types of seashells found in Queensland! If you’re looking for the largest seashell in Australia it can be found here.

): These shells can resemble “helmets” and can even be bulging and cone-shaped.

): These shells are stout and swirled in shape. Their colourings can range from black and white to pale pinks and greens.

): These shells are usually well polished, meaning they travel through the waters a lot getting shined up by various ocean debris. They are commonly shaped with their edges curved inward and elongated in overall shape.

): These are the most common that may be found and are pretty dangerous as they can sting if they are still within the shells that are picked up. They get their namesake from their “cone” shape where they start out largely fluted at the top and get narrower as it gets to the bottom.

): Another popular seashell, the scallop-shaped shell is easily identifiable. It is fan-shaped with ribbed groves for added texture. They are possibly the most iconic shell when someone thinks about seashells.

): These pretty shells have curved shells creating a small swirl in their tops. They are famously found during low tide on Queensland beaches.

): These beauts are true eye-catchers. They mainly showcase spiralled shells with pointed spikes along the tops getting narrower as they get to the bottom.

They are known for their intricate patterns of colourings.

These are just some of the shells that have been known to wash ashore in Queensland. However, there are others that can be iconically recognised.

Are Shells From Queensland Found Elsewhere?

Seashells travel through ocean waters through strong currents and tides. As a result of this travel, seashells are known to show up in various parts of the world.

When it comes specifically to Queensland shells, they have been found elsewhere. Most commonly, Queensland’s shells have shown up on the shores of the Indo-Pacific region

This region is known primarily as the areas leading to Indo-Pacific Asia which includes the Indian Ocean and western and central areas of the Pacific Ocean.

While this particular region is not entirely far away from Australia’s coastlines, it is still far enough for a seashell to travel.

Strong currents truly can carry these remarkable shells outward to wash up on other shorelines. No matter what, they are truly unique pieces of artwork from the ocean!

Australia continues to be a place of idyllic sights to behold. This certainly includes their seashells within the Queensland area!