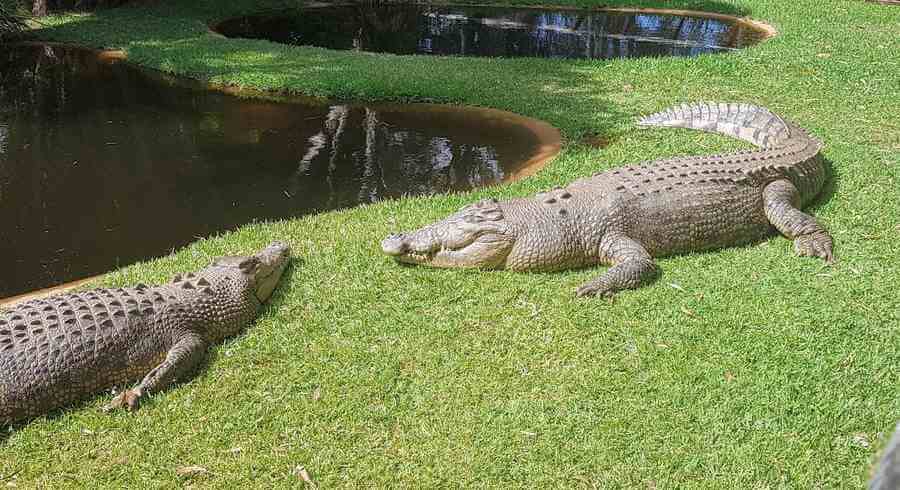 Queensland is known for its wild and stark beauty but it is also known for its exotic and sometimes dangerous wildlife. This particularly includes crocodile sightings.

While wildlife is known to roam around Australia, keeping a distance from them is the best approach when a sighting occurs. But, are crocodiles found everywhere

in Australia? What about Hervey Bay?

Traditional crocodile country is not something Hervey Bay is classified as the climate is not classed as warm enough for crocodiles, They have been found to inhabit parts of the Mary River just south of Hervey Bay. Further sightings have also been reported in the Eli Creek area of Hervey Bay.

Crocodiles are known to be in the far northern areas of Queensland, such as Cairns, due to the warmer water temperatures, which is generally what crocodiles prefer.

The crocodiles found in the Hervey Bay area and the northern part of Queensland, are known as saltwater crocodiles (or salties as Australians tend to refer to them as).

While they can be found in the saltwater, these creatures also make their way to freshwater areas like estuaries or river mouth areas such as the Mary River

In recent years, there have been more sightings of crocodiles in the Hervey Bay area. This isn’t because of breeding.

Some residents and officials were concerned that they might be breeding and spreading further south along the eastern coastline of Queensland.

However, there has been no direct evidence found to support this.

Crocodiles can swim, although not at great distances. Rather, they ride on ocean currents and are carried to other parts of the coastline (or even the world in some cases).

With this in mind, they have been sighted off of the coastline of Fraser Island, Hervey Bay’s historical island. However, salties are not making this their home.

They prefer having some access to land as well as smaller bodies of water like rivers and estuaries. While they are not found on the island themselves, they can be sighted in the waters around the island, especially since those waters can be turbulent along the coastline.

Swimming on Fraser Island is also best done at their perched lakes rather than taking chances in the ocean waters surrounding the island.

Recording sightings of crocodiles in Hervey Bay in the year 2019 did seem to be on the rise. Below are some of the supposed sightings that were discovered around the Hervey Bay area in 2019.

For the year 2020, the Queensland Crocodile Management Plan

programme has reported many sightings throughout the month of April, with almost 30 sightings in various areas, including the Mary River and other river areas as well as some beaches.

In an effort to make the public more aware, officials installed croc sighting signs at some of these locations. Being aware of the surroundings is the key way to ensure that everyone stays as safe as possible.

As this list showcases, the frequency of sightings can fluctuate but still pose the possibility of happening. Moreover, it also showcases that crocodiles can show up just about anywhere where water currents might wash them up.

This once again means that staying alert and keeping a safe distance is critical.

How Far South Do Crocodiles Live?

Saltwater crocodiles are most known for being in the Northern Territory

and north-eastern areas of Queensland as far north as Cairns

. This area is often referred to as “Croc Country“.

These waters tend to be a bit warmer and saltwater crocs do prefer warmer waters. However, as previously stated, they have made their way south to slightly cooler temperatures.

But just how far south do crocodiles live in Australia? It is important to remember that crocs only “live” in river mouths and estuaries, not the actual ocean. Their ocean sightings have been due to their ability to be carried out to sea by currents.

In these cases, the crocodiles can survive in the ocean, riding the currents, for long periods of time (upwards of 20 days or more) without food or water. While they are carried to southern areas, they can also be found in southern rivers and estuaries

Crocodiles have been known to be as far south as the Mary River in Gympie. This is only about 167km from Brisbane and only 52km from the Great Sandy National Park.

More astonishingly, this is a whopping 449km away from the northern points of Queensland where they are typically found. While they aren’t found living here too often, the Mary River can experience them.

Once again, this really showcases how these creatures travel and prove that entering any waters, especially rivers, should be done cautiously!

Why Are There More Sightings of Crocodiles Near Hervey Bay?

There has been some debate about why there are more sightings of crocodiles near Hervey Bay.

The biggest theory that exists over more croc sightings in Hervey Bay is that climate change is to blame, this is known to have an effect on water temperatures there for the waters are more inviting to crocodiles.

Climate change around Australia has been shown to affect things like the Great Barrier Reef in the form of coral bleaching.

occurs when sea temperatures rise. In the case of salties, warmer water is an attraction. These temperatures aren’t as warm as the tropical north, but warm enough to have some changes that are quite evident.

In the more northern areas of Queensland, where salties are witnessed more, the water temperatures range between 28 to almost 30 degrees Celcius. While that doesn’t seem like a huge difference, and really it’s not, it is still a slight difference.

With such close proximity in temperatures, warmer water temperatures in Hervey Bay could be a reason for more crocodile sightings.

These creatures are dangerous looking and can be dangerous. No matter where they are found, it cannot be stressed enough to stay as far away as possible.

Crocodile sightings should be reported to the Queensland Crocodile Management Plan programme (or CrocWatch) and can be done so by calling 1300 130 372.

This ensures that any encounters can be addressed by the programme and help them determine the need for removal of the creature.