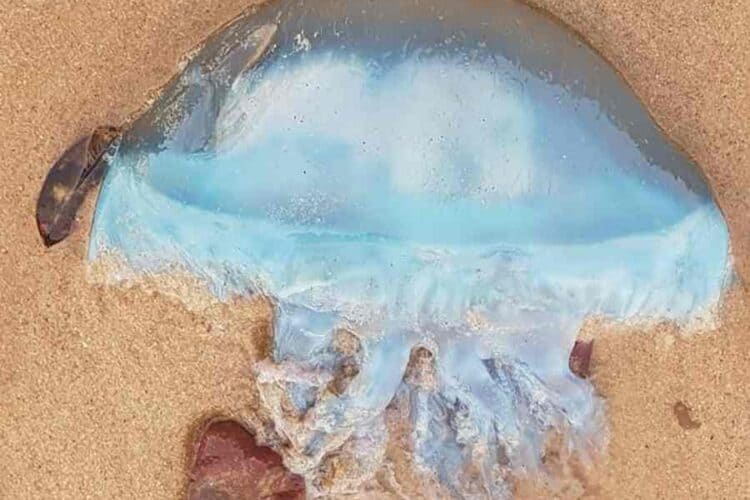 Australia is one of the most beautiful places on Earth, however, behind the beauty lurks some seriously dangerous animal life. This can be on land or in the ocean.

While there are some marine and animal life that pose dangers, this doesn’t mean visiting Australia should be a no-go. No matter where someone is visiting, it is important to keep a watchful out for any emergency or threat.

When visiting Australia, especially the waters, this rule of thumb simply means to pay a little closer attention! There are a variety of dangers in the waters surrounding Australia’s coastlines, but specifically, there are 5 that may be considered to be the biggest threats to watch for when in the water!

The beaches are a great place to relax and enjoy the sun but do so with caution. Always read signs before entering the waters and proceed slowly, so that the creatures can move away.

Below are the top 5 most dangerous sea creatures in Australia.

Jellyfish are found worldwide, but box jellyfish are found specifically in tropical waters in the Northern Territory waters of Australia. This includes along the coastline of Queensland around Gladstone and as far west as the area of Exmouth.

This is a pretty big area for these creaturs to cover, but they frequent these waters as they have tropical warmth and pristine crystal clear waters that give fabulous views of the Great Barrier Reef. Anyone in those areas should keep a look for box jellyfish

But what makes them so dangerous? The sting from a box jellyfish can result in death with over 60 deaths reported including children. This is especially true at remote beaches where envenoming causes death within 30 minutes.

It is estimated that only skin contact of several metres is needed for severe envenoming in adults. This number is drastically less for children where only 1.2 metres of skin contact is needed.

If resuscitation is successful and the person is alive when brought to a hospital, it can be possible to survive. This is usually through life support and intervention to the airways along with antivenom. Read more on some of the other marine stingers here.

The symptoms of a sting include the following:

Treatment that can be administered as soon as it happens includes:

Getting stung by any jellyfish is no fun but a box jellyfish is especially dangerous. People should always be aware of their surroundings and wear the proper things to enter the waters.

This can include long-sleeved swim shirts and pants and swimming shoes. Swimming shoes will protect the feet from stepping on something sinister!

These octopuses may look stunning, with their blue rings around their tentacles. They have yellowed skin so the blue really stands out. But the blue rings intensify in colour when it feels threatened.

This is where these creatures come quite dangerous. A quick glance a the blue-ringed octopus

would show they are only between 120-200mm in size and are usually docile marine life.

They only attack when provoked or they feel threatened. This can include being stepped on or cornered. Considering that they can change shape and usually camouflage themselves, stepping on them is a risk!

The type of injury they bestow upon their victim is usually a bite. This bite is often so small and painless that it goes unnoticed until symptoms start showing up. Below are the symptoms that occur after a bite from this unsuspecting octopus:

There is currently no antivenom for a bite from these creatures. This means its victims will likely die and survival is only possible if artificial respiration is started and maintained before major effects start occurring.

The venom in the blue-ringed octopus is tetrodotoxin and it is literally in almost every organ of its body. Tetrodotoxin is 1,200 times more toxic than cyanide! This has been estimated to be enough to kill over 20 humans in a matter of minutes.

One of their favourite places to hang out is around coral reefs in the Pacific and Indian Oceans, making their home in the western and northern areas of Australia.

Once again, when entering the water, people should be aware of everything and wear swimming shoes. It is inevitable that someone’s feet will brush up against something or step on something and this is why swimming shoes are critical!

3. Bull Sharks Found At Every Coastline In Australia

Bull Sharks can be found off of every coastline in Australia. They are known to frequent the Sydney Harbour area the most, but when entering any waters off the coast, being aware is key.

They can be found in estuary areas as well. These areas are where large tidal mouths meet a river area. Basically, they will be found in shallow water areas, typically where people love to swim.

While they don’t produce venom, their danger comes from their powerful bites.

can get up to 350 centimetres in size (or 11.5 feet long) and up to 227 kilograms in weight (or 500 pounds)! This enormous size makes them quite overpowering.

They are easily distinguished from other sharks by their characteristics. This includes a stocky body, blunt snout, and triangular teeth. While they are often considered the world’s most dangerous shark, they will only attack humans if they mistake them for struggling fish.

This doesn’t make them any less dangerous to society. Their bites can result in blood loss, loss of limbs and death if bitten in certain manners. Watching for a shark fin on the water’s surface is one of the best ways to avoid these creatures.

Stonefish or reef stonefish are dubbed the deadliest fish in the sea. They are also found in the northern waters of Australia in reef or coral areas. They often lie dormant among these areas trying to blend in with their surroundings.

They can get up to 40 centimetres long and are an unattractive colour of brown or grey with yellow and orange or red colouring. Their venom is quite deadly and if an affected person is not treated, they will likely die.

The dorsal fin area is where the venom is housed on a stonefish. There are 13 total spine areas here with 2 venom sacs per spine. These sharp spines are easy to step on if not careful.

What makes this fish so dangerous is that only 18mg of their venom is required to be fatal. That’s only 6 of their 13 poisonous spines! Below are some symptoms that can occur of stung by a stonefish spine:

by immersing it in hot water. The heat from the water is said to stop the further spreading of the venom.

Surviving victims of these stings often have long-lasting nerve damage. The coral reefs are a big attraction in Australia and the stonefish, jellyfish and blue-ringed octopus make it dangerous but swimmers and divers should always have the proper gear on to ensure they’ve attempted to protect themselves.

It is also a good idea to only swim or dive on lifeguarded and patrolled beach areas. This makes access to help easier.

Lionfish are majestic looking with their feathery fins and vibrantly coloured stripes. However, these fish can be dangerous and should be avoided if possible.

They are usually found in Western Australian waters in lagoons or seaward reef areas. They are quite aggressive and actively seek out attacking other marine life.

They even stalk their prey ready to attack, making them known as an invasive species to these waters. They are similar to the Spotfin Lionfish, but the common lionfish

If swimmers or divers come close to this fish, they do not swim away or attempt to flee. In fact, they direct their fins at the approaching person which results in painful stings. While death is not associated with a lionfish sting, there are other symptoms of a sting. These include:

Depending on how deep and how much venom is distributed is important. Most stings occur on the hands, so before entering the water, removing jewellery can be a nice tip.

If stung, seek medical help as soon as possible to ensure it is properly treated.

Enjoy All The Beauty Of Australia!

Even with some dangerous wildlife around, Australia is still a remarkably gorgeous country. The key to enjoying all it has to offer is remembering to be aware and take as much precaution as possible!

link to What Is The Best Time Of Day To Go Snorkeling?

Are you ready to plan your next snorkeling trip? In that case, you must be wondering when is the right time to go - read this article to find out! Snorkeling can be a fun and rewarding experience,...

Continue Reading
link to What Is The Best Day To Rent A Car?

Renting a car can be expensive. Between service fees and general charges, the price can really rack up. Even what day a rental car is picked up can save a few bucks. However, knowing some general...