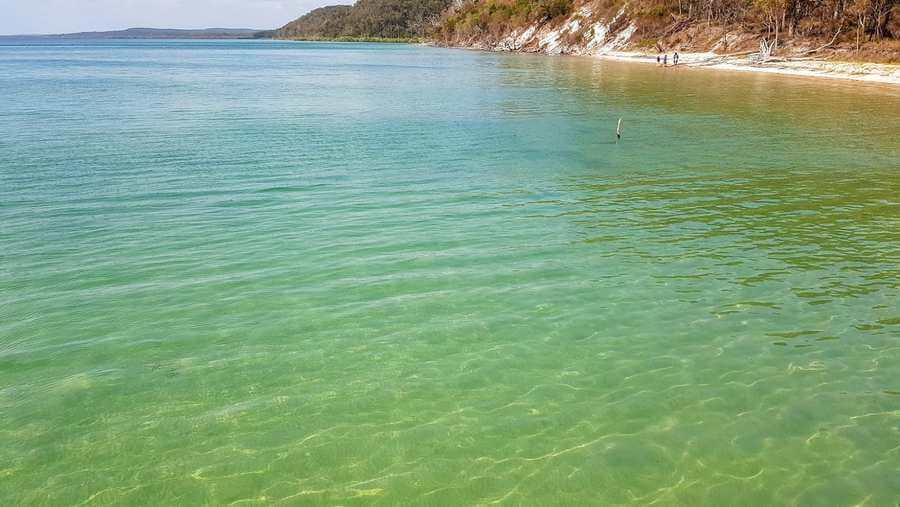 Fraser Island, or K’gari as the locals call it, is the largest sand island in the world.

Located off the coast of Queensland, Fraser Island stands out as a tourist or recreational destination – notwithstanding its proximity to popular nearby attractions such as the Great Barrier Reef and whale watching off the coast of Hervey Bay.

Half a million tourists visit Fraser Island every year, When you visit, though, you may not see a soul around – that’s how sandy and remote the island is.

Fraser Island is a remote island there are no lifeguards on the beach, the waters have plenty of riptides, This can make it dangerous for swimmers! The sharks found here are known to attack and kill, Often seen in the shallow waters of the eastern side of Fraser Island take caution when visiting.

It’s difficult to equate Fraser Island’s idyllic beauty with the many perils that lurk there, but it’s a reality.

Much has been written about the spot being one of the most dangerous destinations in the world. Any tour guide or publication about Fraser Island will feature a long list of cautions.

Since it’s remote this also means that if you are injured or suffering, other tourists may not come across your location before it’s too late.

This is the reason why tourists are often encouraged to employ a guide – their experience could be critical in maximizing your enjoyment without exposing yourself to undue risks.

What Are The Dangerous Troubles Of Fraser Island

Let’s start with some natural phenomena – the 75 Mile Beach, the beautiful high sand dunes, the many inviting lakes, lookout points along the rugged coastline and the sea itself.

Driving along the sand road on 75 Mile Beach is a thrill, but it can be dangerous as well. An even bigger problem may arise from off-roading and driving up and down the dunes.

Then there are the lakes – tourists who jump off a high point into a lake may get seriously hurt if the sand has built up close to the bottom. Some of the lookout points have sharp rocks below.

Lastly, there are dangerous rip tides that crop up regularly.

In addition to Mother Nature, there are denizens that are extremely dangerous. Wild dingos run free on the island, along with snakes and spiders.

Great white sharks lurk in the waters, along with the extremely dangerous Blue Bottle

The Wildlife On And Around Fraser Island

When you revel in the beauty of Fraser Island and go off for adventure, remember the dangers that lurk in this pristine pile of sands and the seas surrounding them.

Let’s start with the various denizens that you might meet on the island.

The seas around Fraser Island are rife with two of the deadliest stingers in the ocean – Blue Bottles and Irukandji jellyfish.

Blue Bottles are Portuguese Man o’ Wars known for their distinctive blue colour. They are responsible for 10,000 incidents of people getting stung all around Australia every summer – frighteningly, most of the stings occur in the waters in this area.

The sting of the Blue Bottle shoots a venom that causes intense pain. A red welt appears immediately, followed by a series of long, thin open wounds.

If not treated, the sting could lead to permanent lesions and scarring. Besides the intensity, the toxin causes symptoms that are similar to a severe allergic reaction, including larynx swelling, cardiac blockage and breathing difficulties.

If left untreated, victims will experience pain, fever and even death. The deadliness increases for children. Blue Bottles often arrive in groups and they can sting even when they have washed ashore on the beach.

This makes them a major health hazard for beachgoers on Fraser Island – a single Blue Bottle sighting may be enough to close down a beach for a while.

are even deadlier. They are the smallest species of jellyfish (barely a cubic centimetre) and one of the deadliest. They can shoot stingers not only from their tentacles but also from their bells.

The toxin of an Irukandji jellyfish creates conditions that are collectively known as the “Irukandji syndrome” – a set of conditions so severe that over fifty people are hospitalized annually and there is a definite possibility of fatal brain hemorrhages.

, but this is more likely to be a myth than reality.

On the contrary, the preponderance of whales, dolphins and other shark prey, plus the blood and offal which gets released from some whaling plants nearby, make these waters the breeding grounds for the Great White shark.

Some have even described the Queensland coast as being a favourite hangout for young Great Whites. While shark attacks on humans are rare, it’s a definite cause for caution.

There are more than 200 wild dingos on Fraser Island. These animals are feral and as such very dangerous to humans.

There have been several recorded incidents of attacks on tourists, even death – as in the famous case of a young boy who wandered away from his family and was attacked and killed by several dingos in 2001.

Do not treat these canine looking creatures as your friendly neighbourhood pup!

Reptiles And Amphibians On Fraser Island

Fraser Island is home to 18 species of snakes, a third of whom are venomous and extremely dangerous to humans.

Among them is the Eastern Brown Snake (also called the Common Brown Snake), which causes 50-60 deaths a year and is the second most venomous snake in the world after the Inland Taipan.

Saltwater crocodiles have also been spotted in the Great Sandy Straits, including Frasier Island, especially during the summer months.

Overall, the sands, beaches and waters around Fraser Island may be beautiful, but there are many dangers you can face from its non-human inhabitants.

Extreme watchfulness and caution will often be called for.

When you visit Fraser Island, driving along the sand road and off-road adventures are considered to be essential parts of the experience. But thrill-seekers who are by themselves would do well to be cautious.

Driving On Sand And Off-road Thrills

While the sand road along the 75 Mile Beach is magnificent, hidden dangers may lurk along the way. You should be aware of tides and pockets of sunken sand – things change quickly when natural forces such as tides are involved.

Perhaps more importantly, the topography and habitat of Fraser Island are so varied, it’s easy to run into a problem somewhere along the way if you are not accompanied by an experienced guide.

For example, riding up and down sand dunes can be great fun, but it can also lead to mishaps and injuries. Unfortunately, if you get stranded or injured, there might not be a lot of people around to help.

This makes adventuring on Fraser Island a sport that requires caution – and sometimes a helping hand.

Lookout Points Can Be Dangerous

The rugged lookout points all along the coast of Fraser Island are picturesque in the extreme. But drive up too close, and you may be plunging down to jagged rocks hundreds of feet below.

Instead of merely enjoying the scenery watch for the loose sand is everywhere. It’s difficult for an inexperienced tourist to know where to go and when to pull back.

Beware Of High Dives Into Lakes

A favourite pastime among visitors to Fraser Island is to enjoy a swim in one of the many lakes that adorn the place. However, looks can be deceiving. Visitors diving off high sides or dunes into the inviting waters below can be met with a nasty surprise.

Sand has a habit of collecting and building up shoals – many of the inland lakes on the island will have sand much closer to the surface than may be apparent from a casual glance by a tourist.

Diving from a significant height into a sand shoal just a few feet below the surface is a recipe for fractured bones, if not a broken neck.

The Sea Around Can Be Treacherous

Though the seas around Fraser Island may be its most enticing feature, swimming is not encouraged in these waters.

Besides the jellyfish (and Great White sharks), there are dangerous riptides that constantly develop offshore – especially around the eastern parts of Fraser Island.

As with the problems mentioned above, the danger is compounded because there won’t be any lifeguards on duty to warn you of hazardous conditions.

So, What’s The Verdict?

There is no debate. Fraser Island is one of the best spots in the world to visit, enjoy and adventure on.

However, if you do not know the island well, be very careful. There are dangers that lurk behind the idyllic appearance of this paradise. Be cautious and responsible for the health and safety of you and your family or loved ones.

If possible, hire a guide – there are multiple tours that last between one and three days.

Options should be available from Hervey Bay or any of the other takeoff points. Do your research, keeping in mind safety while you enjoy the beauty of this area.