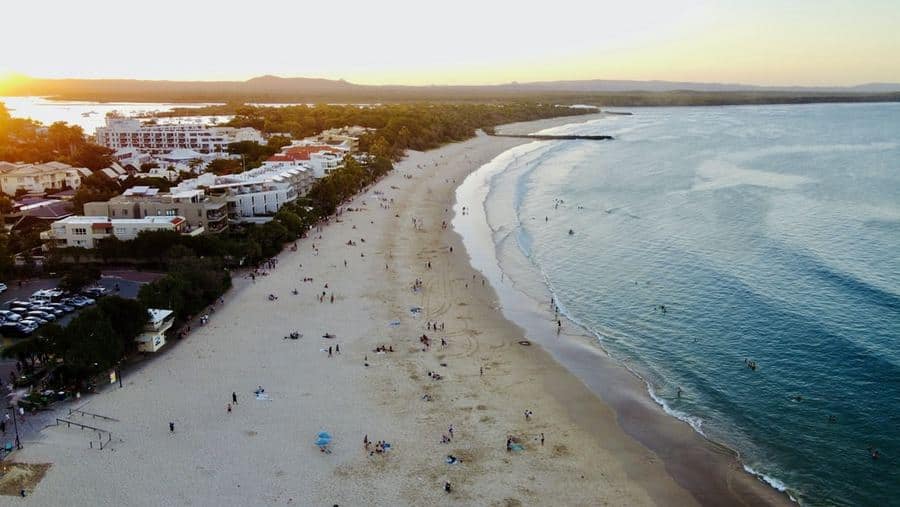 There are many places on Earth that truly showcase how stunning nature can be. Australia is easily one of the world’s most remarkable places in regard to natural beauty. From coast to coast, Australia has countless landscapes and seascapes that continuously impress people.

One particular place in Queensland, Australia is Noosa where the views are highly anticipated by visitors. This area of Australia is known for its unique everglade system that is amazing to explore!

The Noosa Everglades are located in the upper region of the Noosa River. It is estimated that this system of everglades spans around 60 kilometres, however, its true extent isn’t completely known. Everglade systems can wind through multiple rivers or lakes systems which can make it tricky to pinpoint a start and stop.

The Noosa Everglades do begin in the upper portion of the Noosa River and sprawls throughout the various waterways from that point but a distinctive end of the everglades isn’t known.

Even though the exact extent of the Noosa Everglades isn’t known, there are still estimations of where it reaches out from the upper area of the Noosa River. It has been said that the everglades in Noosa extend to the upper Noosa River catchment area, Lake Coothraba to Lake Cooroibah, and into Laguna Bay.

Additionally, it may include the areas of Donella Lake and Lake Weyba. These particular areas are only speculated as being included in the everglades due to the continuous flow of waterway systems and flora and fauna that are found in these outer lying areas.

While the exact span of the everglades is estimated the one thing that is for sure is that it is at least 60 kilometres in size. Moreover, the bulk of the area that is considered the Noosa Everglades is very predominant in its crystal waters and remarkable views of birds and other wildlife.

Perhaps part of the beauty of the Noosa Everglades is not knowing where it exactly ends. That makes exploring the everglades even more exciting!

What Are The Noosa Everglades?

For birdwatchers, the everglades are one of the best reasons to visit! The waters here are so remarkable that the Noosa Everglades are often referred to as the “River of Mirrors” as the water is so clear in places that it appears reflective!

To properly explore the everglades, visitors can follow its intertwining waterways via kayak. There are tours offered but guests can choose to launch into the waters with their own kayaks as well. Paddling along the waters gives people the opportunity to really soak in the sheer beauty of the surroundings.

The Everglades are home to an abundance of lily pads, tea tree forests, and mangroves. Taking a kayak through the everglades in Noosa is one of the best ways to feel immersed in nature!

Correlations Between The Noosa And Florida Everglade Systems

These similarities really showcase why the only two everglade systems in the world are so special!

Are There Crocodiles In Noosa Everglades?

There are no crocodiles or alligators lurking in the waters of the everglades. While that might seem strange considering that the area is full of wildlife, it is a pleasant surprise for visitors. It is true that crocs usually thrive in river systems and estuary waterways, however, for unspecified reasons, crocs do not live in the Noosa Everglades.

This is the major difference between the everglades in Noosa and the ones found in Florida. The Everglades in Florida are full of alligators making it quite different from Noosa’s system.

Even though crocs aren’t found in the everglades, it is always smart to be alert before entering any waterway. Wild weather events are known to transport wildlife into areas they aren’t normally found. There is no fear of crocs in the Noosa Everglades, however, keeping alert is always essential, especially in Australia!

Can You Swim In Noosa Everglades?

Because crocs or alligators do not pose a threat in the Noosa Everglades, swimming is possible here. While the water isn’t incredibly deep, it is extremely clear and refreshing. From kayaking to paddle boating to swimming, there are countless ways to enjoy the stark beauty of the Noosa Everglades system.

As with swimming anywhere, always take precautions when entering the water. Be alert for weird sounds or watchful for strange wildlife. Nature is unpredictable. In saying this, people shouldn’t fear the waters in Australia, rather just be smart about respecting nature and ensuring a watchful eye is always open!

The Noosa area of Queensland proves to be gorgeous all on its own, however, its everglade system is the experience of a lifetime. Between the interesting wildlife (especially the birds!), the crisp waters, and the flora that flourish here, there is plenty to see and enjoy at Noosa Everglades!

Moreover, compared to the everglades in Florida over in America, the Noosa Everglades are considerably more safe to explore as well. Even still, both everglade systems are a fascinating part of the world’s natural environment!