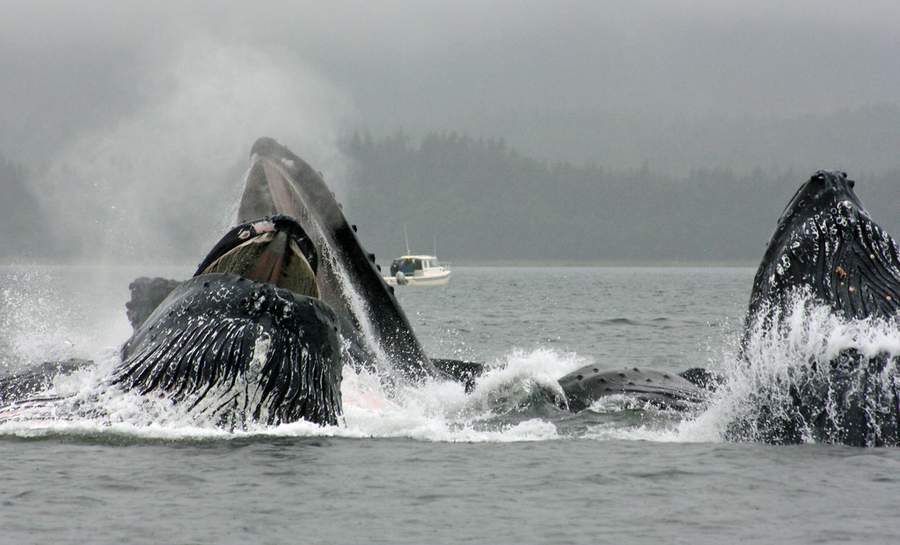 (Megaptera novaeangliae) is a majestic creature. These 40-60 feet long mammals are easily recognized by the shape of their black and white marked bodies, knobbly heads, marks on their flukes and distinctive humps.

Humpbacks often hug the coasts close to human habitation in search of food. Known for their propensity to break the surface regularly, whether to breach (that is, jump out of the water) or slap the water with their pectoral fins and tails – humpbacks have become a favorite of whale watchers worldwide.

What does this 25-40 tons behemoth eat to survive over its long (up to 100 years) lifespan?

Humpback whales feed for only four months every year. They feed in polar waters when its summer in the Northern Hemisphere, eating enormous quantities every day, building up enough blubber to last them through the lean winter months – when they need energy to rear calves and lactate.

Humpbacks migrate tens of thousands of miles (as long as 16,000 miles), reaching tropical and subtropical seas by November to breed and give birth during the next four months.

They rarely feed during winter, unless they find major feeding opportunities nearby.

An adult humpback whale forages for food for 90% of its waking hours every day. On average, a humpback will eat at least twice a day, consuming between 3,000 to 5,500 lbs. of food. Its favourite food are small fish, plankton and krill – a small shrimp-like crustacean.

A humpback whale possesses long, hard, bristle-like hairs called baleen inside its mouth. When the whale opens its mouth and gulps, the baleen acts like a filter. Only small fish and krill are able to flow inside and get trapped inside the mouth.

Humpbacks typically hunt in packs, often in groups of a dozen or more. They can directly attack schools of fish or krill, sifting them through their baleen. Occasionally, they will hit their waters with their fins or flukes to stun and swallow their prey.

Humpbacks are known to echo-locate and communicate with each other through grunts, groans, snorts and barks, along with some unrelated vocalizations to aid group foraging.

They are known to employ some of the most innovative and diverse hunting repertoire among all baleen whales.

Perversely, widespread hunting has reduced the number of humpbacks and other whales, making more food available for the remaining members. Similarly, the melting of the Antarctic ice has created more foraging opportunities during the summer.

What Do Humpback Whales Eat?

Humpback whales mainly eat krill, planktons and small fish that roam in schools. What they eat will vary based on where they are hunting. There are some staples in their diet, such as young Atlantic and Pacific salmon, capelin, herring and American sand lance.

In the North Atlantic, Humpbacks will find haddock, pollock, mackerel and Atlantic menhaden. In the Southern Sea and the South Pacific, especially off the coasts of Australia and Antarctica, humpback whales have been known to feed primarily on krill and copepods (another species of small crustacea).

They can be opportunistic – whales have been known to frequent the waters around fish hatcheries in Southeastern Alaska, looking to find salmon fry released from those hatcheries.

While there are occasional reports of humpbacks of inadvertently attacking schools of sea lions or other larger creatures, they do not feed on them, nor target them as prey.

Each humpback has about 330 pairs of dark-grey baleen plates with coarse bristles hanging from them. The baleen prevents anything larger than small fish from passing through into their mouths.

How Much Does A Humpback Whale Eat?

During their summer feeding months, humpback whales forage for up to 90% of their waking hours. They are known to eat between 3,000 to 5,500 lbs. of small fish, krill, copepods and plankton. There is literally no end to foraging for these creatures.

The strain of growing a calf inside, while simultaneously lactating, during the winter months is so severe that humpbacks need to build up a very large blubber reserve – they literally crave an unlimited supply of food during the months when they do feed.

It is rare for humpbacks to feed during the winter, unless the opportunity to do so effortlessly presents itself.

Humpbacks utilize many innovative techniques to hunt, including unique group behavior such as bubble net feeding (described below).

Where And How Do Humpback Whales Bubble Net Feed?

“. Several members of a group of humpbacks approach a large school of prey, maintaining close communication and contact with one another.

They position themselves in such a way as to surround their prey.

At that point, a number of whales will start swimming around the fish in ever tightening circles, constantly blowing bubbles under the school.

A dozen of more humpbacks could be involved in the attack – some of them blow bubbles, while others dive deep to drive fish towards the surface and yet others sing or vocalize to herd the prey.

The circle can begin with a large diameter, up to 100 feet, which then keeps tightening from all sides. The bubbles and underwater forays nudge the fish into an ever-shrinking cylinder – a virtual “net” encapsulated in the bubbles. The prey is driven to the surface under the relentless pressure.

At an opportune time, the humpbacks will launch a concerted attack from all sides, tearing through the net and drawing the fish in through their baleen, filtering and trapping thousands of fish in a single, coordinated, attacking gulp.

Bubble net feeding is often spotted off the coast of Alaska. Variations of the technique are found in other areas.

Interestingly, many variations of hunting prey, including bubble net feeding, are thought to have developed specifically in certain regions – to scientists, this presents evidence of learned behaviour evolved over decades and generations.

As an example of the above, lobtail feeding is a variation of bubble net feeding that has been observed by scientists and oceanographers in the North Atlantic. In this version, the humpbacks combine their normal attack technique of stunning pray with their tails or flukes with the process of blowing bubbles.

Each whale will slap the surface of the water one or more times with its tail, creating waves that confuse and stun their prey, before blowing the bubble net.

Some have suggested that these techniques may be examples of learned behaviour, having been passed on from generation to generation over decades spent surviving in the ocean.

How Often Does A Humpback Whales Eat?

While the conventional wisdom is that humpback whales eat twice a day during the four months of summer, it has also been suggested that they will eat till they drop.

In general, humpbacks will eat based on what opportunities present themselves and the amount of effort needed to herd prey. Once their food is located, they will feed till they have fully sated themselves. Then they wait for the next cycle.

As described above, humpbacks rarely eat during the winter months when they are busy breeding and giving birth. There are exceptions, but they only occur if prey falls into their jaws with little or no effort.

Other Interesting Facts, Where Can You Find Humpback Whales?

Humpback whales can be found in every ocean on the planet, though they have been placed on the protected species list in many locations. They had been hunted nearly to extinction in many areas by the middle of the 20th century.

Thankfully, the species has since recovered well. Currently, scientists track more than a dozen known “populations” worldwide. Due to their exhaustive migration patterns, the same groups of whales can be seen at different locations during their routes.

During the summer months, humpback whales are abundant off both the Northeastern and Northwestern Coast line in North America and around Iceland in the Arctic and North Sea regions.

Sightings are common along the Newfoundland and British Columbian Coasts in Canada, as well as the Eastern Seaboard, the Pacific Northwest and Alaska in the US.

Humpbacks can also be spotted as far south as Panama and Ecuador. Antarctica is the only location in the Southern Hemisphere where humpbacks will be found during summer – the steadily warming waters have created extended foraging grounds for whales in recent years.

During the winter months, humpback whales can be spotted at a few places in the Northern Hemisphere (including many locations in the North Pacific such as Hawaii, Baja California Sur, Puerto Vallerta and Okinawa).

However, most of the whale watching locations will be found in the Southern Hemisphere during November through March – which are summer months south of the Equator.

Prominent locations include Australia, especially areas off the coasts of Sydney, Byron Bay and Hervey Bay, along with several locations in New Zealand, Cape Town in South Africa, the Tongan Islands and Saint Helena.

Some of the largest populations, in excess of 20,000 animals, are found off the coasts of Eastern and Western Australia – making them excellent destinations for whale watching.

Humpback whales are a crowd favorite the world over, but these gentle giants are known to be highly intelligent, community-oriented animals that grace our oceans.

Once nearly hunted to extinction, it is up to each one of us to be conscious about conservation – so we can enjoy the sights and sounds of these majestic creatures for generations to come.