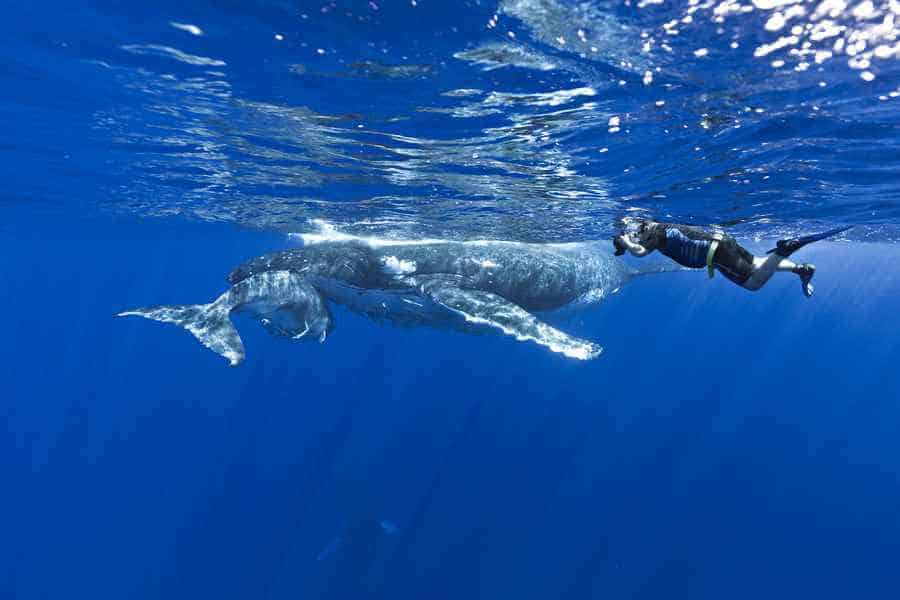 Humpback whales mature in less than 10 years. Birth of young and mating apparently takes place in the warmer waters of the Great Barrier Reef .

The cold Antarctic waters are unsuitable for Humpback Whale Breeding or reproduction, although providing the richest source of food.

Courtship is playful and splashy, often social, involving an energetic group that races along the surface at breakneck speeds, churning the water up into turbulent knots of breaching, slapping whales. Males may compete aggressively over a single receptive female.

Gestation lasts for 11-12 months and calves are nursed until they are a year old and about 8m long. Calves are about 5m long at birth and weigh 1.5 tonnes.

The cow’s milk has a high-fat content (35% compared with 2% for human milk) and milk production can be up to 600 litres a day. Therefore, a suckling calf increases its weight five to eight times during 11 months.

The calf develops a protective layer of blubber so it can follow its mother back to cold Antarctic waters. Mother/calf pods often have an adult male escort.

Humpback whales mature in less than 10 years. Mating and birthing is believed to take place near the southern area of The Great Barrier Reef.

This results in many calves entering the Bay in late September and October – there are reports of calves only a day or so old being sighted in the Hervey Bay Marine Park.

The female continues to feed the calf for up to twelve months. This is roughly the duration of their migration until they return to the warmer waters the following year.

The female generally has a calf every 1-3 years.

All photographs shown on this page are copyright Â© 1997 Seaspray Charters – used with permission.