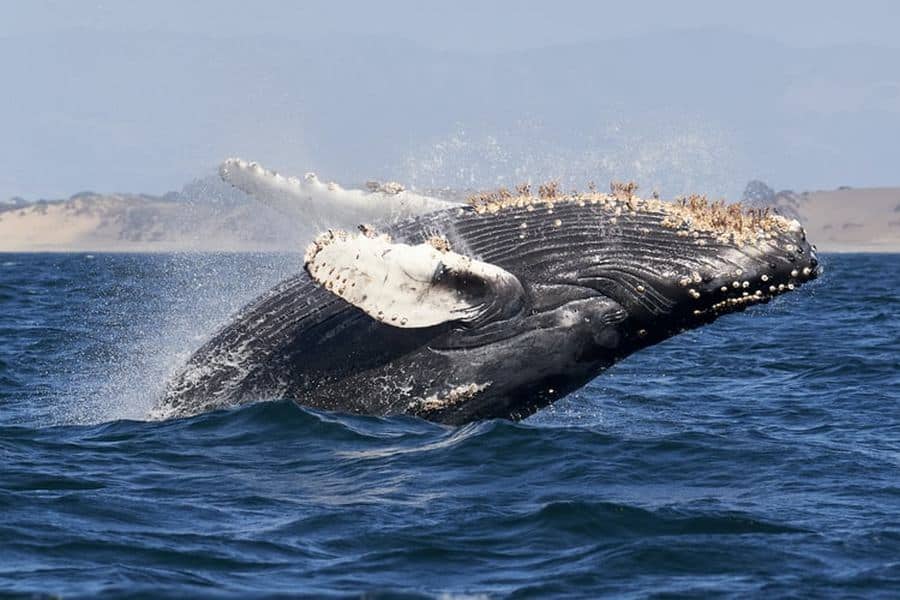 The ocean is home to many sea creatures. From fish to sharks to dolphins and more there are thousands upon thousands of sea creatures swimming around. Some of the more intriguing creatures include whales.

Whales are like dolphins in that they are mammals that require living within the water.

One of the most recognisable whales on the planet is the humpback whale. This magnificent creature is found all over the world and can often be seen in the waters not too far from many country’s coastlines.

Humpback whales are incredible mammals that live in all the oceans around the world. They are curious and playful by nature, yet not an aggressive species.

They could be considered “gentle giants” considering their immense size! When thinking about these fascinating sea creatures, it is important to know some key characteristics

Humpback whales have some pretty distinct physical features that can help just about anyone properly identify them. While their size is the biggest feature, there are other key indicators to look for.

This is the average size for these creatures. Some could end up being a little larger or smaller. Their weight alone is quite astounding! But what are some physical features to look for when trying to sight a humpback whale?

Physically, these mammals are quite impressive. Their overall size and uniqueness set them apart from other whale species.

Humpback whales have very distinct physical features that help identify them. For generations, these creatures have studied by research groups all over the world.

The ability to research this species hasn’t been too difficult as humpbacks migrate to many places all over the world.

From Australia to the United States to Africa, pretty much all ocean coastlines have witnessed a sighting of these massive mammals.

This is particularly true for Hervey Bay in Queensland, Australia where humpback whales are known to stop to relax in the waters during their migration journey north.

During this time, visitors to the area can experience quite the sight of seeing these creatures enjoy the temperate waters.

It is thought that they simply enjoy the waters and that mother humpback whales bring their newborns here to nurture them during their migration process.

Obviously, from a boat, their size is put into a much bigger perspective. Humpback whales are a naturally curious and playful species. Because of this, they often give off an appearance of enjoyment.

They can be seen splashing around or slapping their tail fins or flippers on the surface of the water.

During this time of frolicking, people can witness why humpback whales are called “humpbacks” in the first place. It isn’t because these whales have a hump in their back. That would be too obvious, right?

This species of whale got its namesake from the imagery it produces when jumping into the air from the water’s surface to dive deep into the ocean.

The research that has performed in concerns of humpback whales has spanned years upon years. These creatures continually provide an interesting insight into their lives!

They Can Hold Their Breath For Around 45 Minutes Or Longer

They might live in the ocean but they don’t actually breath under the water. They don’t gills like other marine life. This is why their two blowholes are important.

Their circulatory systems can hold up to 75% of their oxygen, making it easier for them to hold their breath or to dive down for food.

Whales Resurface When They Need Air

Their blowholes have to have access to fresh air. Because of this, they are typically found lounging about just under the water’s surface, only sticking out the tops of their heads so that their blowholes can accept air.

They must do this in intervals. While they can hold their breath, they still need to remember to come up for air.

For every 7 minutes that they dive down, they come up for air in which they take in about 8 “gasps” through their blowholes.

They Even Come Up For Air While Sleeping

How a humpback whale sleeps has always been a topic of conversation. Scientists believe that humpbacks can control part of their brain while they are sleeping!

This allows them to resurface for air as needed while sleeping. It should be noted that ironically, they can hold their breath for around 45 minutes and generally only sleep for around 30-minute chunks.

Perhaps this aids in helping them resurface for air while snoozing!

Male humpback whales are known to sing. It was initially thought that they do this for mating, but no real evidence has emerged to support this theory.

Instead, it is also thought that they sing to locate other humpback whales. Their songs can travel thousands and thousands of miles (up to 10,000 or as little as 20!).

It is said that even at that distance, the whales can mimic each other’s songs to find each other.

Between their size and overall behaviour, humpback whales are one of the most unique sea creatures alive.

Moreover, their status as a mammal, like a dolphin, makes them even incredible! Their physical appearance, noises, and behaviours make them easy to identify for most people!