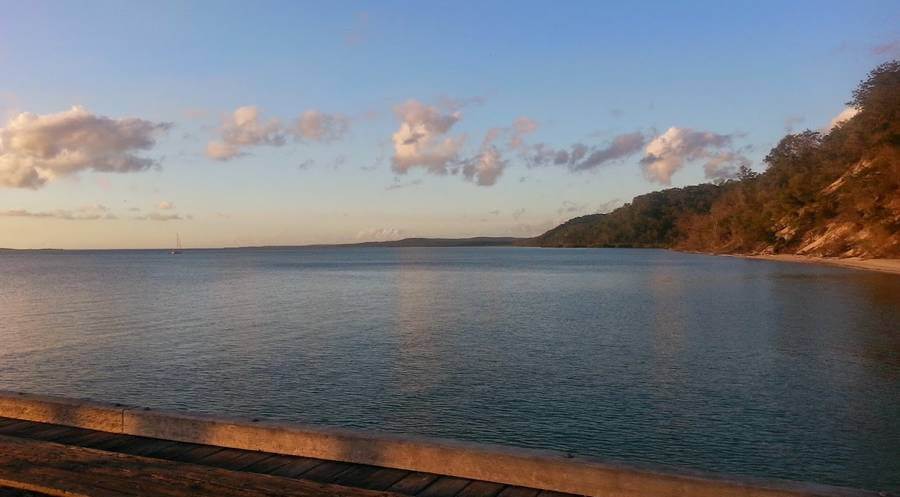 Noosa is a popular place for travellers as it has its own 4,000-hectare national park. With walking tracks, various wildlife, and so on guests will find Noosa an adventure all its own.

It also is home to over 300 species of birds as well as other wildlife. With so much to explore, those in the Noosa area will easily find themselves seeking this adventurous island.

There are some companies that offer guided tours of the island that run out of the Noosa area. Most of these tours are conducted off of special tour buses that are able to travel on the ferry or barge over to Fraser Island.

Moreover, the pick-up points are generally from hotels, making the experience quite convenient. Local hotels often offer help booking these tours which adds to the convenience of getting on the tour buses and heading over to the island!

It’s simply less stressful figuring out all the logistics of the trip and makes for more time to relax and sight-see!

Some of the tours also offer luncheon deals where there are small meals served during the trip. This is a huge perk as guests don’t have to worry about packing up a lunch with their belongings.

While the guided tour buses do provide a lot of the things needed for a trip over to the island. Guests should still consider packing a light bag with hats, swimwear, cameras, a towel, and a change of clothes.

If properly packed up, these few items won’t be too heavy. Another thing to bring is sunglasses, but they obviously don’t need to be packed up and can be worn instead!

Tours Available Out Of Noosa Queensland

is one of the most popular touring groups on Fraser Island. Operating out of various locations, they seek to reach out to as many travellers as possible!

When it comes specifically to the Noosa area, they offer their “Full-Day Warrior Tour“. This tour takes place from a massive Fraser Island Discovery truck that, like most vehicles, can handle the sands of the island.

The tour is a one-day experience (as the name implies) and starts super early at 6:20 am.

An early start time ensures that the most can be made out of the day! The return time is scheduled for around 5 pm.

This tour package also offers lunch and drinks, morning tea, and air-conditioning on the bus (or truck, however it may look to some people).

The tour stops off at major attractions on the island including Lake McKenzie. Lake McKenzie is the world’s most famous perched lake with its crystal clear blue waters and stunningly white sands.

Other notable stops include Central Station and Pile Valley. These are in the heart of the rainforests on the island and are quite remarkable areas.

Central Station is a notorious camping spot on the island and Pile Valley is the area surrounding this spot. The valley is so incredible because of the trees in the area that have grown there over the many, many years.

These trees in this particular area are known to grow out of the sand at almost 200 metres up. This not only makes for some interesting photo opportunities but also a way to really soak in the surroundings of the naturalistic settings.

This tour group is known to operate out of Noosa and Brisbane and offers a great view of Fraser Island.

The tour itself is said to make stops at the beaches, lakes, and rainforest areas, much like other touring groups. Once again, travel is by tour bus suited to be carried by ferry or barge to the island.

This tour company offers one-day and two-day tour packages, some of which include camping overnight!

The camping overnight is particularly special as it gives guests a chance to experience the great outdoors. All camping areas on the island are enclosed fencing to help keep the wild dingoes out.

This tour also provides all the camping gear needed. If traditional camping isn’t preferred, they also provide a 2-day tour that has cabin accommodation instead.

Either choice will be an ample way to enjoy the naturalistic surroundings of the rainforest.

All children’s prices are for children ages 5 to 15 years of age. Please check the recommended age for each tour.

This company states it does courtesy picks up from accommodations, however, from Noosa directly it is best to call to ensure that it will venture there.

While they do depart from Inskip Point to Fraser Island, it is still best to ensure that pick up from Noosa is available.

This touring option to Fraser Island has 1 and 2-day tours available. All tours depart around 8 am and return between 5 and 5:30 pm to the Inskip Point area.

All these stops are incredible locations to experience a little of everything that makes Fraser Island so spectacular. Once again, travel is by a vehicle suited for the sandy conditions on the island.

The tour also stops at the Eurong Beach Resort for a special lunch for hungry guests! This is all for the 1-day tour.

The 2-day tour takes guests to all the same iconic spots but also includes stops at the Champagne Pools and Indian Head as well as Lake Wabby.

Accommodation is provided through the Eurong Beach Resort for the overnight stay. Both options give guests the opportunity to see the most beautiful parts of this sand island.

Children’s prices are based on children that are ages 4 to 14 years of age. This tour does allow infants on the tour and they are free of charge to come along. Check Current Pricing on all tours and rooms as they are subject to change.

Can You Get To Fraser Island From Noosa?

Fraser Island Tours from Noosa are absolutely possible! As expressed previously, most of the tours in the area will do courtesy pick-ups at most accommodation locations in Noosa.

From there, the buses generally travel through Toolara Forest

and the Great Sandy National Park areas while en route to Inskip Point where the ferries and barges depart for the island.

How Far Is It From Noosa To Fraser Island?

In terms of time, travelling to the Inskip Point from Noosa for a ferry or barge departure will take almost an hour and a half.

Noosa is a gem of a city itself, however, travelling to Fraser Island while in the area is the perfect way to experience one of the most idyllic areas in the world.

From the great tour group options as well as the island itself, Fraser Island has so much to offer anyone from the Noosa area!

To Book A Tour To Fraser Island Click Here

link to Can You Have Camp Fires On Fraser Island?

Fraser Island is part of Great Sandy National Park. In an attempt to protect its beauty, UNESCO listed Fraser Island as a protected area. This means that some actions are limited to protecting the...