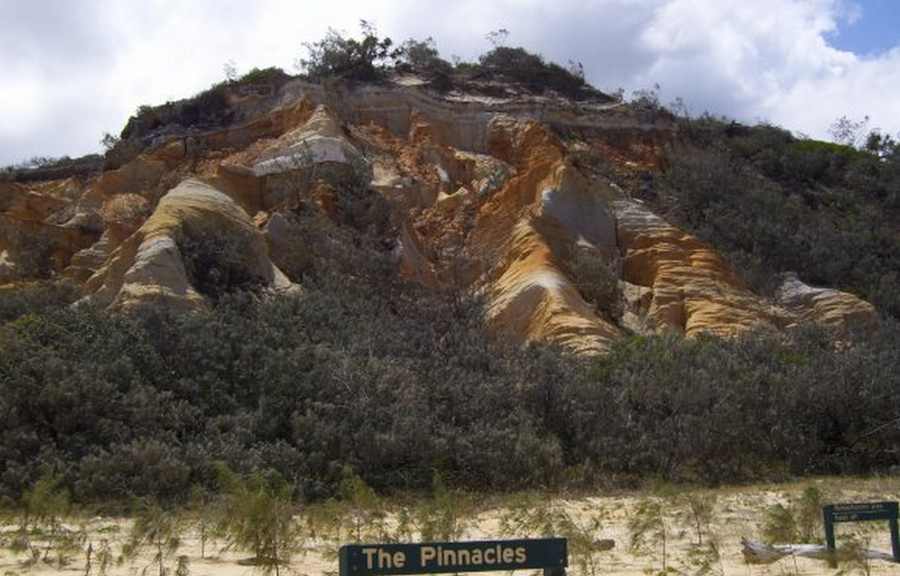 One of the most remarkable things about Australia is its natural beauty. The landscapes that are sprawled throughout the country are simply breathtaking. Fraser Island provides a substantial amount of naturalistic beauty. This massive sand island is just off the eastern coastline of Queensland and attracts tourists and residents alike.

The island is so popular due to its diverse plant life, wildlife, and various landscapes. This particularly includes The Pinnacles!

These sand dunes are tucked away off of a short walkway that spurs from the eastern coastline of Fraser Island. More specifically, the dunes are about 20km south of Indian Head, a famous headland that juts into the ocean off the island.

It is also only about 3km north of the Maheno Shipwreck, a historical ship that washed up on the island in the 1930s. The sands prove to be a central point from other key points of interest on the island.

While their towering size makes them interesting enough, The Pinnacles are most known for their array of colours. With over 72 colours spiralled through the sands, The Pinnacles are also referred to as “The Coloured Sands”. This tinted colour to the sand attracts visitors from all over to witness one of the world’s most natural phenomenons.

These huge sand dunes are said to have gained their unique look due to years and years of wind erosion. The process of erosion has formed the dunes into a historical piece of natural art.

The Pinnacles: Things To Do

Capture The Sand Dunes In A Picture!

One of the best things to do while at The Pinnacles is to snap a photo of the sand dunes. It is said the best time to visit is during the morning when the sun is rising and casting a beautiful glow onto the dunes. No matter what time of day someone is visiting The Pinnacles, a photo has to be taken!

The sheer beauty of the dunes. They display such interesting colours which are primarily reds and yellows.

The colours and size of the dunes are quite impressive. However, visitors aren’t permitted to climb or cascade the sand dunes. Due to the dunes being made of sand, climbing them can cause shifting in their position which can be unsafe.

Safety is certainly a concern, however, more than anything the preservation of the layered sand that has formed over thousands of years is also important.

Both locations aren’t very far from The Pinnacles, especially the shipwreck.

The shipwreck has remained washed ashore since the 1930s and has since become rusty remains that intrigue visitors. It makes for an excellent photo opportunity as the empty, rusted remains are mesmerizing. Indian Head is a bit further away but is a coastal headland known for its iconic ocean views.

The rocks are slippery from the water since it juts into the ocean, but there is a way to cascade the rock if someone is wearing proper footwear!

Enjoy The Ocean Views From The Pinnacles

The Pinnacles face the eastern coastline of Fraser Island. While they aren’t directly on the beach area, they are close enough to still enjoy the surrounding beach views. One of the best ways to enjoy visiting the coloured sands is by soaking in all the beautiful landscapes and seascapes.

The magnificent dunes are the perfect backdrop to the skyline when looking out to sea. The overall experience of enjoying natural surroundings is quite a thrill for those who appreciate the outdoors.

While the sands themselves appear as simply towers of sand, visitors can not only enjoy the view of the coloured sands but also the nearby attractions as well. Fraser Island as a whole proves to be a display of natural wonder!

The coloured sands on Fraser Island, or The Pinnacles, are one of the world’s most unique sand formations. Throughout many, many years, erosion has brought the sand to the island and created the towering mounds we see today.

However, The Pinnacles aren’t just sand, they also are made of clay. The colours are derived from the levels of iron that are found in clay and sand. The iron changes the hue of the clay and sand which is why the dunes have their strange hue.

Depending on the amount of iron that is found in the mounds will dictate how the colours occur. This is why there are so many variations of orange, red, yellow and brown throughout the sands. Additionally, the process of erosion has created the sand dunes exclusive appearance as being “layered”.

The sands have formed in such a way that the colours don’t simply meld together in a washed-out way, they actually appear layered and separated in some parts of the dunes creating a truly robust piece of artwork.

The sand dunes certainly give Fraser Island one of many beautiful spots to visit. The formation of the dunes digs deeply into the historical and natural value of the island as well. However, the history behind the coloured sands goes much deeper than erosion.

Fraser Island is known for its historical roots, especially in concerns to the Butchella people who were the island’s traditional owners.

The Butchella people believed that the coloured sands were formed from an old legend concerning a love story. They believed that an angered man drove by jealousy attempted to throw a boomerang at his lover and her lover.

However, her lover, a Rainbow Serpent, dove in front of the boomerang to protect the young woman. As a result, the Rainbow Serpent burst into a million shards of coloured sands sprawling into the sand dunes we know today. As with any legend, no one knows the truth behind it. But it sure is whimsical to think about!

Whether the sands were a direct result of years of wind and sea erosion or a love story gone wrong, the coloured sands are one of the most interesting spots to visit when going to Fraser Island!