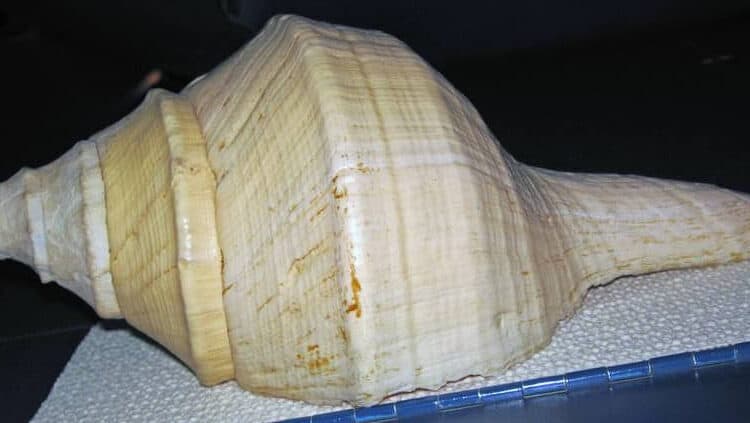 Seashells are magnificent pieces found along the shorelines of beaches worldwide. They are beautiful works of nature that are created by marine life like sea snails.

While the way they are formed is quite mystical, what is the largest one to exist? What really gives seashells their beauty is their shapes and colourings but big shells are interesting to find.

When it comes to the largest seashell in the world. the Australian Trumpet is said to be the largest. Australia is known for its exotic wildlife and even sea snails make the list!

Australian Trumpet: A Seashell In A Class Of Its Own!

) being the world’s largest seashell is quite the title to hold and these gorgeous shells live up to their expectations!

They are created by gigantic sea snails from the Gastropod mollusk family, Turbinellidae. These incredible creatures have been roaming the ocean waters since the 1600s and are highly sought after by collectors everywhere.

This is because of their unique shapes, colouring, and sizes. Their shells are known to grow up to 91 cm (or 35 inches) in length and weigh around an impressive 18kg. These are massive measurements when it comes to some of the more traditional seashells found around beaches.

When assessing these staggering characteristics, it is important to know how exactly seashells are produced. What makes them the unique pieces that they are? The ocean waters are full of seemingly infinite numbers of marine life and each one is more fascinating than the other.

When it comes to mollusks and sea snails, they are particularly interesting in how they create shelter for themselves. Seashells are primarily created through the secretion of proteins and minerals of these creatures.

These secretions form layers that harden into shells to help protect the creature. The colourings are formed from the diets that the creature eats and these make seashells even more special.

This process of how shells are made is what creates such personality in each one. They are different from snail to snail even within the same species.

While the overall shape of the Australian Trumpet still is the “trumpet” shape with pointed tips that spiral down to a narrower end with a large opening where the snail lives.

This particular shape is only found in this species, though other species can have similar designs but still be different enough to be classified all their own.

Where Do You Find These Majestic Shells?

But where exactly are these majestic shells found? This species of sea snail can be found off the Northern shorelines of Australia. They have also been discovered in Eastern Indonesia and Papua New Guinea waters.

How seashells are found is when the shell is shed from the marine life it protects after it has passed away. While living creatures can still wash up on shorelines, typically it is the empty shells that are found.

Even though these creatures’ shells are incredible in size, as a species in general not much is known about their behaviours or ecology.

The very little that is known about this interesting species with its massive shell is that it is considered a predator, similar to other sea snails. Sea snails are unsuspecting creatures that to humans may not look like much but can really be so much more.

Sea snails are predators to marine life like worms and other smaller lifelike starfish etc. These particular species are known for eating marine worms. This diet aids in their growth.

Sea snails, in general, are misunderstood for their beautiful shells. As with any wildlife, especially in Australia, people should take caution when trying to handle their shells. Ensuring they are empty before touching too much of them is essential.

With such large and impressive shells, the Australian Trumpet should be respected like other marine life before handling. But it is an impressive sight to see such large shells.

In fact, such size may seem unreal but experiencing it is a once in a lifetime opportunity. It is amazing to see nature working in such majestic ways. For example, the intricate colouring caused by the snail’s diet can transform into colours like pale yellows, hues of brown and specks of white among ivory backgrounds.

These distinct colourings mixed with the textures created when the shell forms are what make each and every seashell a piece of artwork. Grooves, crevices, points, and ripples all are factors in how the overall look of the shell is transpired.

The shell becomes a textured canvas for the colours to meld into. While this is true for all seashells as they are all created through the same process, the Australian Trumpet is most exceptional due to its large size.

The bigger the canvas, the more impressive the artwork turns outs.

The process of shell making and how it transforms into these pieces of art is remarkable and distinctive. People may give credit to the overall look and size as the factors that make seashells desirable, however, the credit should be given to the process of how they are made.

If this unique production didn’t exist, the size nor colouring or shape would be as intricate as they are. To really appreciate the Australian Trumpet, the appreciation of how the sea snail forms it is should be just as respected!

How Big Can A Seashell Get?

This particularly includes clams whose shells are rippled and enormously beautiful. While most people think about seashells that wash up on shore, clamshells are still technically seashells.

They don’t wash up on shorelines like snails and other species but still are a sight to behold in their size! Clamshells can get up to over a metre across in size and weigh upwards of 200kg!

On the other side of the scale, seashells can also be quite small. Micro mollusk species are recorded to have a shell size of only 0.7mm, a mere fleck in the sea.

Even with such an incredibly small size, the larger species are more sought after. There is simply something more impressive about larger than life items and when it comes to seashells that wash up on shorelines, the Australian Trumpet takes the cake!

Outgrowing is common for certain species and results in the shells found on beaches. When it comes to the Australian Trumpet species they are just larger snails naturally, so they don’t usually outgrow their shelter as they are large enough to encase them safely.

Can Australian Trumpets Be Sold?

It is a common practice to head out for a beach day and partake in seashell collecting and hunting. However, in certain areas of Australia, seashells can be protected from being collected or taken from the sands.

This is especially true in certain beach areas that are considered to be national parks. Other locations limit the number of shells that can be taken away as a means of conservation.

It is always important to follow these rules and regulations to ensure the protection of the important species within these areas. The seashells that are sold are done so by quota for species etc and cannot include protected species.

Currently, this species of sea snail is not a protected species so no quota has been set as a standard for them.

This leads to astronomical sales of this shell. Considering its massive size and beauty, it is no surprise that the Australian Trumpet is sold for profit.

Collectors seek it out and even novice persons who simply enjoy such a novelty of beauty! This impressive shell is known to sell for anywhere between $83 to $637 (in Australian dollars).

This price is determined by the overall size, shape, colouring, and weight. Obviously, the bigger and heavier the shell the more elusive and expensive it will be. Regardless, the price may be well worth it to actually possess such an extravagant piece of natural artwork!

While they are grand shells to find for sale, visiting Australia’s Northern beaches in search of one may be more of a thrill. Not only can those in search of the elusive shell enjoy the bright and beautiful Australian scenery but they can have fun with the hunt overall!

Beaches are full of treasures of nature and seashells are the number one idyllic find. Even if the Australian Trumpet isn’t found, there are plenty of other gorgeous shells to discover. It makes for a truly adventurous day! It is the thrill of the hunt after all that makes a day like that perfect!