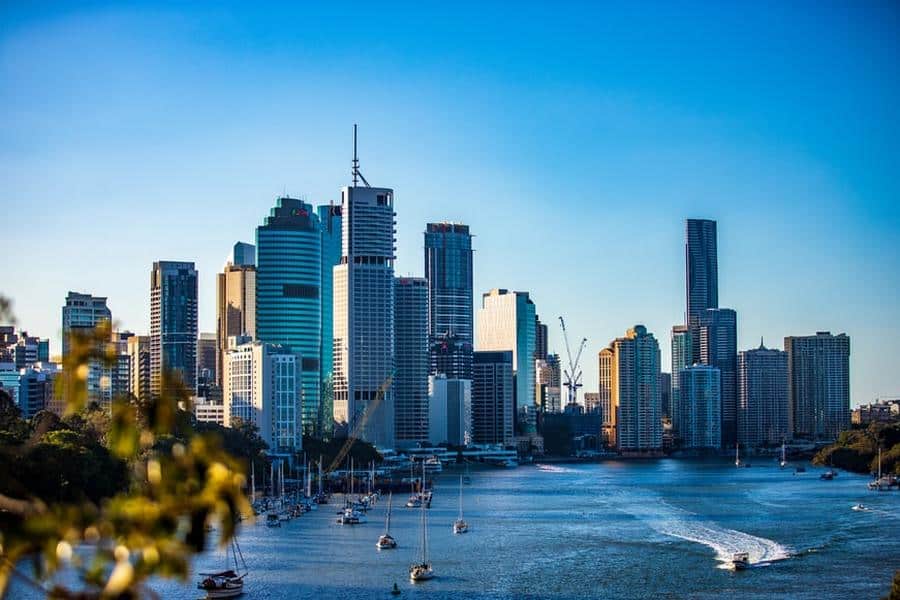 Brisbane is a bustling city in Queensland, Australia that is full of things to do and explore. In fact, Brisbane is the capital of Queensland and is considered one of the most populated areas of Queensland.

Even with a big city-life vibe to it, Brisbane still has remarkable landscapes and ocean views that bring natural scenery to the area. But is the natural surroundings of Brisbane ideal for outdoor activities like swimming?

The Brisbane River is one of Queensland’s most iconic rivers. It is well-known for being the largest river in southeast Queensland and gives Brisbane a very distinct landmark.

While the Brisbane River spans around 344km (or 214 miles) in length, it isn’t a river that is suitable for swimming. The waters are not clear so visibility is highly reduced this can pose a safety risk for swimmers. A large population of Bull sharks also frequent the waters of the Brisbane River.

Considering that the river runs through the centre of Brisbane, there are plenty of stunning photos that can be captured and sort of makes up for the fact that you can’t swim in the river’s waters.

The only place near the river where swimming is allowed is at Streets Beach, which runs parallel to the river on South Bank. Perhaps this man-made swimming spot was created since the waters of the river aren’t ideal for swimming.

No matter the reason behind this inner-city beach being made, it provides a spot to cool down while still sticking close to the river.

Is The Brisbane River Safe?

There are rivers all over Australia and quite a few throughout Queensland itself. Not all rivers are safe to swim in and this includes the Brisbane River.

The water isn’t very clear in the Brisbane River, so visibility is reduced. This is due to sediment and mud entering the water from the surrounding banks of the river. When bodies of water aren’t very clear, swimming in it isn’t very safe.

Even though swimming in the waters isn’t very safe in the Brisbane River, other activities are near or in the river are safe. Kayaking and paddleboarding are very popular water activities in the river. Due to its incredible size, the Brisbane River proves to be excellent for kayaking and paddleboarding for long stretches of time.

Other fun things to do while around the Brisbane River include visiting one of the many surrounding parks off of the river banks, going cycling along the riverside bikeways, or walking along the Teneriffe Boardwalk.

Because the river runs through the very heart of this capital city, there are endless things to explore around the river itself. From restaurants to shops and everything in between, there’s plenty to do in the area.

Why Should You Not Swim In The Brisbane River?

Swimming in the Brisbane River is never a good idea for a few reasons. One of the major concerns lies within the fact that your visibility isn’t great due to the murky water. The Brisbane Council ensures that the public is well-advised of the water’s murky condition.

Even with this knowledge, it can be too murky to risk swimming. Below are the primary reasons why swimming in the Brisbane River isn’t advised.

Reasons You Shouldn’t Swim In The Brisbane River

There Could Be Unknown Currents In The Brisbane River

The Brisbane River is fed from Moreton Bay. When the river fills and drains from this point, it is possible to experience stronger currents throughout the river surface. Strong currents can easily pull people into the water’s surface which is why bodies of water that present these conditions aren’t good for swimming.

This is also why not every beach in Australia is ideal for swimming. This same frame of mind should be used when considering swimming in the Brisbane River.

The Water Is Too Murky In The Brisbane River

The murky water poses a threat mainly due to its poor visibility. As mentioned, the Brisbane Council keeps the public informed on the current conditions of the river.

But how are they achieving this? To date, the council has 11 test sites spread throughout the Brisbane River and Moreton Bay area to collect water sampling

. This sampling is then studied so that the public can be kept up-to-date on the current conditions of the water.

The information provided from these studies is meant to give the public a candid view of what the water is like in the Brisbane River. The council considers this information to be vital to helping the community make informed decisions about how to interact with the river (and other waterways around Brisbane).

Some would argue that perhaps the council should be clearing the water up, and while that might be true, at least they are keeping the public fully informed.

If the water proves to show high amounts of micro bacteria, the council puts signs up to warn the public of these potential dangers. Interacting with bacterial water can cause sicknesses, etc.

It is a good idea to mind these signs when they are posted and to remember that the council will remove them once the water has returned to better conditions.

Overall though, knowing this information helps you to realise that swimming in the murky water is more than just losing visibility. It also has the potential to put your health at risk.

Once again though, this isn’t meant to deter people from visiting or interacting with the Brisbane River. Rather, people should approach it with awareness to make decisions about how to interact with it.

The Brisbane River Is Home To Bull Sharks

The river has had a bull shark population for quite some time. Bull sharks

have one of the strongest biting forces in the world of any shark species. They aren’t incredibly large but they are considered quite dangerous. Because of this, visitors to the Brisbane River should avoid swimming at all costs. The risk just isn’t worth it.

Research has shown that the Brisbane River might be home to upwards of 3,000 bull sharks. While this sounds like a lot, and it is, it is important to remember that the river is quite large. Due to its size, that number of bull sharks can be lurking just about anywhere.

Bull sharks are often found in the Brisbane River because they frequent the Moreton Bay area which is the point where the river is fed from the ocean. The sharks are carried into the river from the bay via currents and then swim upstream.

Even though there are bull sharks known to the Brisbane River and sometimes currents that aren’t always very pleasant, it shouldn’t discourage anyone from enjoying what the river has to offer. There are plenty of opportunities to enjoy the surroundings of the river as well as kayaking and paddleboarding.

The important thing is to stay as safe as possible by being alert and not attempting to swim in the Brisbane River.

Continue Reading
link to Is Brisbane A Safe City?

No matter where you are in the world, you want to know that the place you call home is considered safe. Safety brings about peace of mind that we and our loved ones will feel secure and protected...