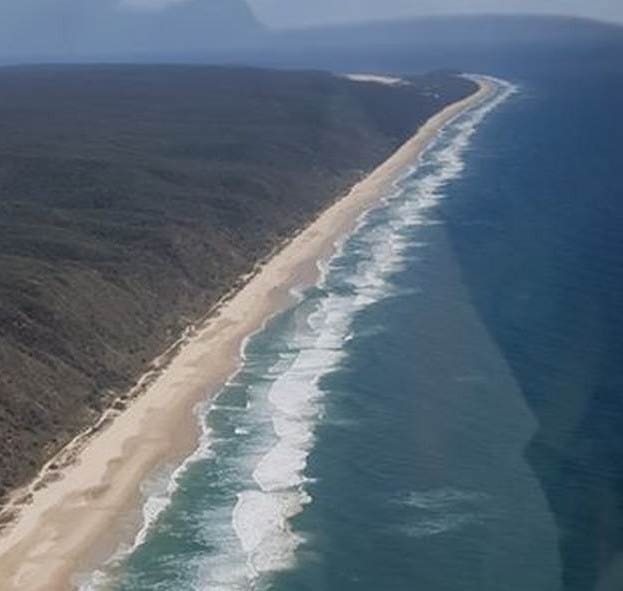 Because of its location between the mainland and Fraser Island, the straits are a beautiful access point for both the island and the mainland.

The straits stretch about 70km and are considered part of the Great Sandy Biosphere, which is a UNESCO

recognised area. This essentially means the area is a calm, tranquil, and naturalistic site with specific relation to Fraser Island, a world heritage site.

The straits are well-known for their pellucid waters, white sandy beach areas, sandflats, sheltered bays, various creeks, and mangroves. In fact, it is estimated to have close to 7,500 different flora and fauna.

The waters around the straits are of warm temperatures, making them ideal for watersports like water skiing and especially for fishing. With such perfect waters and gorgeous landscapes, seeing this area is truly remarkable.

The area is also known for its wildlife such as birds and sea turtles. The spectacular marine life makes the area incredible as well! Other marine life that has been spotted here even includes the rare Indo-Pacific humpback dolphins

There’s also a chance to see the humpback whales that migrate here after July to frolic in the warm waters. It is said that some of the best views of the whales can be seen from the straits.

The straits are also known for their island areas, which specifically include Woody Island

. Woody Island is famous for its lighthouses

The two lighthouses on the island were constructed somewhere between 1866 to 1870, with them being operational in 1867. These historical lighthouses have been preserved throughout the years and scheduled tours of the area are available.

A peaceful swimming area along the shoreline of The Great Sandy Strait, Tinnanbar is known for its dugongs and turtles as well. It is also a great fishing spot.

Another fishing village associated with the shorelines of The Great Sandy Strait, this small inlet is a popular place. With a caravan park and boat ramp, it is truly an outdoor-lovers paradise.

This part of the straits is one of the best for canoeing along the waterways of the straits. With open views of Fraser Island and access to more fishing spots, Boonooroo is an iconic way to visit the straits. It also has a caravan park as well as golfing.

This small area prides itself on being a fishing village

and is one of the areas associated with The Great Sandy Strait that offers barbeque areas and boat ramp areas well.

Yet another charming seaside village along The Great Sandy Strait, Poona is favoured by many due to its secluded location. Moreover, it is a great fishing spot with its creek and estuary areas.

These villages are best accessed via the Maryborough-Cooloola Road and are popular spots for those looking to head to The Great Sandy Strait area for fishing.

The villages are also a great way to see why the locals love the bay area and the strait area so well. From the idyllic surroundings to the peace and quiet to the fishing opportunities, there is simply so much packed into this area!

Moreover, the straits being a part of a biosphere also creates a unique experience to see various wildlife as well.

This is not only due to the various wildlife but also the rocky shores, small reef systems, etc that are a part of the straits.

Specifically, the marine park is said to stretch from Baffle Creek

and then out to sea for three nautical miles.

The straits themselves only sit between the Hervey Bay area and Fraser Island.

The marine park is estimated to be around 540,000 hectares. With such a large area that encompasses the marine park and biosphere area, plenty of marine life frequents the waters within the park.

But, as with any wildlife, precautions should always be taken and the sharks should only be admired from afar.

Below is a list of other creatures (not all of them live in the water) that might be encountered within the marine park.

Creatures Within The Marine Park

There is a wide variety of fish, which makes the marine park, specifically around the straits and the coastal villages so popular for fishing.

While the fish are a big part of the straits area, the birds are just as well-known. In fact, a little over 800km squared is dedicated as an important bird area because around 360 species of birds dwell within the wetland area.

It is well protected and is an adventurous spot for birdwatching enthusiasts. With over 360 species to possibly see, it is truly a fun area to explore. Below are some of the species known to be within the straits.

Birds Of The Great Sandy Straits

These are just a small selection of the different species of birds that can be found in the sandy straits. The wide variety that exists provides so many pops of colour from the different birds. from blues, reds, yellows, and browns, the beauty is in abundance!

The marine park is also home to a couple of artificial reef systems that are perfect for an underwater adventure. These systems include the Simpson and Hardie reef systems.

Established around 2015, these two reef systems were constructed in an effort to diversify the park’s marine life by providing them shelter from predators.

Not only did the construction of these reefs bring more marine life to the area for viewing, but also made the fishing in the area an even more exciting experience.

Building a reef system isn’t easy and a lot of hard work went into these systems. Much planning is needed to ensure that everything goes just right.

The location in relation to tides, other reef systems, and even how the artificial reef system will be able to withstand naturally occurring weather events all go into consideration.

These systems are built of steel and materials suitable for making a reef system.

It is located approximately 7nm (nautical miles) from the Urangan Marina

which is in Hervey Bay. This reef system is pretty significant is consists of 5 clusters of 15 reef systems that are spread out over about 80 hectares. The maximum depth of this system reaches around 16m.

The Hardie reef system is only 2nm (nautical miles) northeast of Woody Island.

The size of this system spreads out over 160 hectares with 3 reef structures, still within 5 clusters like Simpson’s reef. The depth is also up to 16m.

Between the reef systems, fish, wildlife, boating opportunities, and more, the marine park is the perfect spot to get emerged into everything that makes this area so special!

While the lush naturalistic views from the straits are quite thrilling, the straits are mostly known for their fishing spots. This specifically includes the fishing villages speckled along the straits where boat access is usually available for avid fishermen.

The straits certainly attract well-seasoned fishermen, however, there’s no real limit to who can enjoy fishing in the area.

The reason that fishing is so desired here is not only due to the diverse marine life but also because of the various creeks and river systems that are associated with the straits. These areas make for some wonderful fishing as well.

Boat fishing is extremely popular along the creeks running to the mainland and along the straits themselves. One of the greatest things about the area is that even in the chillier months of winter, fish can still be found in these gorgeous waters.

Usually, fishing in the straits is an all-day event for more serious fishermen. No matter how long someone stays out on the boat, plenty of fish frequent these temperate waters.

But what kind of fish can be found in the straits? Below is a list of fish that have been known to head to the waters of the straits!

There have also been sightings of black marlin and even barramundi fish in the straits as well since the water temperatures attract them. With such a variety of fish to catch, fishing in the area is certainly an experience that shouldn’t be missed!

Marinas are a boat lover’s paradise with docking areas for water vessels. The Great Sandy Straits has a marina

specifically located in the Urangan harbour.

With over 170 berths, there is plenty of space for vessels of various sizes. The berths can hold vessels that are up to 30 metres and as small as 8 metres.

While the boat docks are the biggest attraction in the marina, the harbour offers up some other facilities as well that are popular with its guests. This includes laundry services, toilets, showers, an exclusive car park, souvenir shops, cafes, etc.

Visiting the marina is much more than just fishing and boating, it’s an overall experience.

The harbour also has the Hervey Bay Boat Club

, which is known for its delicious food and drinks. There are also two resorts in the marina harbour, the Breakfree Great Sandy Straits and The Mantra Resort.

Both are relaxing ways to enjoy the straits and the marina itself. The terminal building where the laundry and such is located also houses basic groceries like milk etc.

The marina office is open 8-4 pm Monday through Friday, 8-2 pm on weekends and 9-1 pm on public holidays.

Fees are associated with marina booking and it is suggested that a day-by-day charge be paid rather than too far in advance, as they do not offer refunds.

Whether someone is looking to visit the marina, the fishing villages, or the straits themselves to witness all the natural beauty, the sandy straits are a truly iconic way to enjoy the Queensland area between mainland and Fraser Island!

Queensland, Australia’s most famous spot for visitors is the Hervey Bay and Fraser Island areas. These locations give way to stark natural beauty, calm waters for fishing, wildlife sightings, and so much more.

However, this particular section of Queensland also is home to the Great Sandy Straits, a stretch of land with smaller communities within it.

The Great Sandy Straits specifically lies between the Fraser Coast Region of the mainland near the Hervey Bay area and Fraser Island.

The area offers guests fishing opportunities as well as a fantastic view of the naturalistic surroundings.