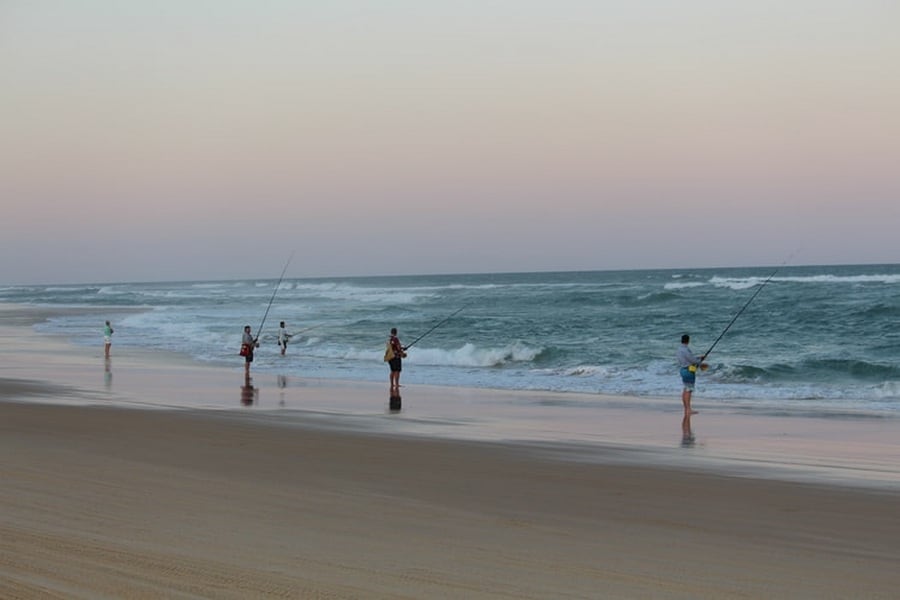 Fraser Island has many well-known fishing spots, here are some of the best:

Other areas to try out fishing are by heading up to Wathumba Creek for some great mud crabs or a spot of fishing, all along the coast from Rooney Point to Moon Point you can catch whiting, nice size bream, dart and good size flathead.

With plenty of fresh bait around, there is a bit of fun in finding your own bait, be it worms, pipis or pumping some yabbies with the kids.

Throw a line out here to attract the fish including, Whiting, Dart, Bream, Mackerel, Tailor, Trevally, Tuna, Flathead and even Sharks.

Many anglers and fishing enthusiasts alike flock to Fraser Island during the Tailor run between August to October. Located on the eastern, ocean side of the northern half of  Seventy Five Mile Beach.

Please remember that there is no freshwater fishing on the Island, as it’s prohibited, there is plenty of ocean to fish in, so you will always catch something.

Be aware that parts of the beaches are no fish zones in the areas between Indian Head to Waddy Point from 1st of August to 30th of September each year. You only may collect sandworms or pipis by hand during these closures.

There is plenty of signage that will show you all fishing closures, so please look for the signs placed in the area. Follow the link for a guide to fishing

, boating and diving in the area.

Tips And What To Look For While Fraser Island Fishing

The best times to catch some fish are dawn and dusk but if the local conditions are safe and the gutters are right you can most likely catch a fish anytime. The reason you want to cast into the gutters is this is usually where fish like to hide out in the deeper waters for protection of larger fish or fowl that may be preying above.

So watch the movement of the tide and rips, so that when you cast your line you can sink into these deeper areas of water.

Look for activity in the waves, such as ripples, swells or boils, these are good indicators that the fish are either being chased or prominent in the area. Try to cast your line either in the thick of it or in the direction they seem to be heading or chased.

Keep in mind that when you see these boils it could mean much larger fish are chasing them.

The best gutters on Fraser Island for fishing are north from the Maheno wreck to Indian Head or close by to Waddy Point. Anglers arrive by barge with their 4WD and have over 126km of ocean beach on the eastern side of the island to fish.

When fishing on the beach look at the waves for Tailor, the waves are a good indicator to see what types of fish are surfing in the waves and gives you an idea of size. You could end up seeing Mullet or Dart in the waves. It also can pay off if you can cast back to the back gutter, look for the white water for the larger Tailor.

If you are new to fishing and would like the help and guidance of a professional angler, or would like an experience of a lifetime at the chance of reeling in something big. Why not give Hervey Bay Sport Fishing a call they can help you to create lasting memories.

It’s important to be able to read the beach to find the gutters. Weather and tides combine to alter the beach producing low tide and high tide gutters where you will find fish.

These surf gutters form between the beach and sandbanks. It can be open at one or both ends, and shorter, narrower gutters with both north and south openings, generally provide better results.

As the surf breaks over the sandbank, holes are formed in the gutter and food is stirred up. The stirred water also provides cover for the fish.

Dawn and dusk are probably the best beach fishing times, but if the conditions and the gutters are right, anytime is a good fishing time. The best gutters can be found north of the Maheno wreck to Indian Head and Waddy Point.

On the west side of the island, the best areas are Wathumba Creek, Moon Creek and Coongul Creek

The most sought-after fish on Fraser Island is the tailor. Each year between late July and October, thousands of anglers make their way to the island for ‘tailor season. Huge schools work the ocean beaches during these months.

Gutters open to the south are best to retain the schools and the Indian Head and Waddy Point areas provide the best tailor fishing. Bleed fish upon capture.

Sometimes called swallowtail. Caught all year round generally on the eastern beaches. It’s an excellent fighting fish, and like a tailor, should be bled upon being caught. Normally caught during the day, but better quality fish will be caught at night.

Sometimes called tarwhine. Main catches between May to September. Best fish from the rocky outcrops on the ocean side or in the creeks on the western side.

Caught all year round. Fish at low tide on the ocean side. The creeks are best on the western side usually providing larger catches. The outgoing tide in shallow waters where the current is slow-moving and discoloured is best.

Caught all year round. Main catches between September to March. The best areas are the rocky outcrops on the ocean side and any of the creeks on the west side. Large fish are generally female and should be released.

Requires lots of patience. The best places are deep surf gutters, and rocky outcrops, fished at night on a new moon, on the low or high tide. Usually May to September.

Many other species are caught off the island including mackerel, tuna and reef fish. Reef fish are usually caught at Ngkala Rocks, Browns Rocks and Poyungan.

On the western side, Roonies reef is popular usually providing a good catch. Wathumba Creek sometimes offers mangrove jack and trumpeter. Don’t forget your crab pots if you’re in this area too.

While you are at Fraser Island, be sure to wet a line and try Hervey Bay Fishing as there are lots of great places along the shoreline to fish.