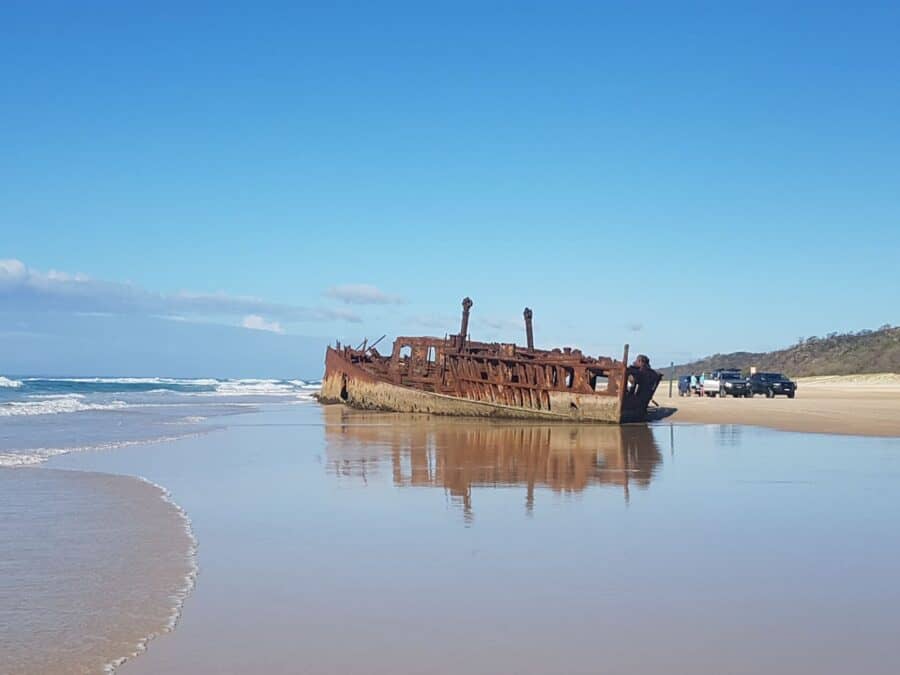 The Maheno shipwreck is an extremely popular sight-seeing attraction on Australia’s Fraser Island. Throughout many years, the history behind what exactly happened to this sea vehicle has been discussed and questioned.

What draws people to these types of historic sites is the sheer mystery behind it. Everyone loves a good mystery or situation with a bit of questions to speculate. When it comes to the Maheno, there is some information out there about its overall fate.

The Maheno is not exactly a mystery, but its fate has always been a matter of conversation as it is an interesting shipwreck.

What Happened To The Maheno?

The Maheno, also known as the S.S. Maheno

, started out as many liners of its kind did; as a passenger ship. This beautiful ship was crafted by Scotsman, William Denny and Brothers in the early 1900s and officially launched in June of 1905.

At the time, this ship was considered to be truly remarkable in its design as it features turbine engines. These engines could get the ship up to speeds of around 18 knots. It impressively could hold over 400 passengers at a time.

It became a frequent passenger ship on a route that sailed between New Zealand and Australia. This route proved well for the ship for some time.

However, the ship’s purpose changed which may have aided in its downfall. When World War I was occurring, the need for medical staff rose dramatically. Specifically, the Gallipoli campaign of the war needed aid with casualties and medical emergencies.

In August of 1915, the S.S. Maheno was commissioned to become a hospital ship. This was a great honour for the ship and it served to help carry casualties between Gallipoli to Malta.

It was suited with over 60 orderlies and members of the New Zealand Army Nursing services. These members helped with caring for the patients being transported between cities. The capacity of the S.S. Maheno was greatly appreciated for this area as the numbers of casualties rose.

Between the S.S Maheno and another ship, Marama, over 40,000 patients were transported during their time aiding in the war hospital efforts.

In 1935, the S.S. Maheno was decommissioned. It had reached the end of its service to the New Zealand Army Nursing services. The ship was considered to be at the end of its usable life and was set to be towed off.

It was sold to Japan and the liner, the Oonah, was given the duty of towing the S.S. Maheno to Japan. Linked by a wire rope measuring somewhere close to 300 m, it set off in July of 1935.

Only 3 days after setting sail, the ships met a fate with mother nature. A powerful cyclone ripped the ship’s towline connection apart. While there was a crew aboard to oversee the transportation of the ship to Japan, it wasn’t a very large crew at all.

The efforts to keep the S.S. Maheno were ultimately lost and the marine liner was carried away in the cyclone. The cyclone caused the S.S. Maheno to crash onto the shores of Fraser Island in Australia.

After falling to ill fate to the cyclone, the S.S. Maheno washed up on the shores of Fraser Island. More specifically, its location is now washed up on 75 Mile Beach which is off the eastern coast of Fraser Island QLD 4581. The shipwreck has never left the shore since and still sits in the original area of where it came ashore.

The location along 75 Mile Beach is really optimal as this beach is quite popular. The beach serves a road for 4×4 vehicle riding as well as those looking to enjoy the natural sights of the beach as well.

The shipwreck is pretty close to The Pinnacles, which are the famous coloured sands of Fraser Island. Featuring over 70 different colours, the sanded cliffs bring visitors from all over the world to experience their beautiful formation.

These visitors then have an ample opportunity to check out the Maheno shipwreck as well.

Considering the decades upon decades that the shipwreck has been planted along the Fraser Island shoreline, it has obviously aged. Damaged from the cyclone, certain parts of the shipwreck were originally missing.

However, throughout time, the wreck has rusted and become a bit more brittle. Overall though, it has managed to maintain its ship looking shape. This is especially impressive since the waters around Fraser Island, particularly around 75 Mile Beach are known to be quite violent.

Strong riptide currents are always crashing along the beach shoreline and somehow the shipwreck has managed to keep some of its shape. But, there is still some noticeable aging and the brittle and rusted out nature of the wreck has deemed it a little unsafe.

Guests used to be able to walk among its deteriorating hull, however, now that is not suggested.

Even still, the wreck makes for some wickedly great photographs. Its backdrop of the Coral Sea really gives way to impressive photo shots. Any angle the shipwreck is photographed at provides some sort of photo to really treasure.

This is even more true as the photos serve as a way to preserve this rich piece of history. The S.S. Maheno may have met a strange fate, but even over 100 years later, it is still serving a significant purpose to newer generations.

This chunk of historic art will continue to be the topic of conversation and be a part of Fraser Island and 75 Mile Beach’s attraction.

Nothing is more satisfying than experiencing a piece of an old historic artifact like the Maheno shipwreck. It truly makes Fraser Island an even more interesting place to visit.

The island is a treasure cove of perched lakes, forests, etc and the shipwreck will continue to be such an inspiration and alluring site for visitors to experience.

This is true for tourists and residents of Australia. The shipwreck never gets boring and it brings such interest and mysterious vibes after each and every visit. Residents will continue to cherish this rich piece of history right at their backdoor!