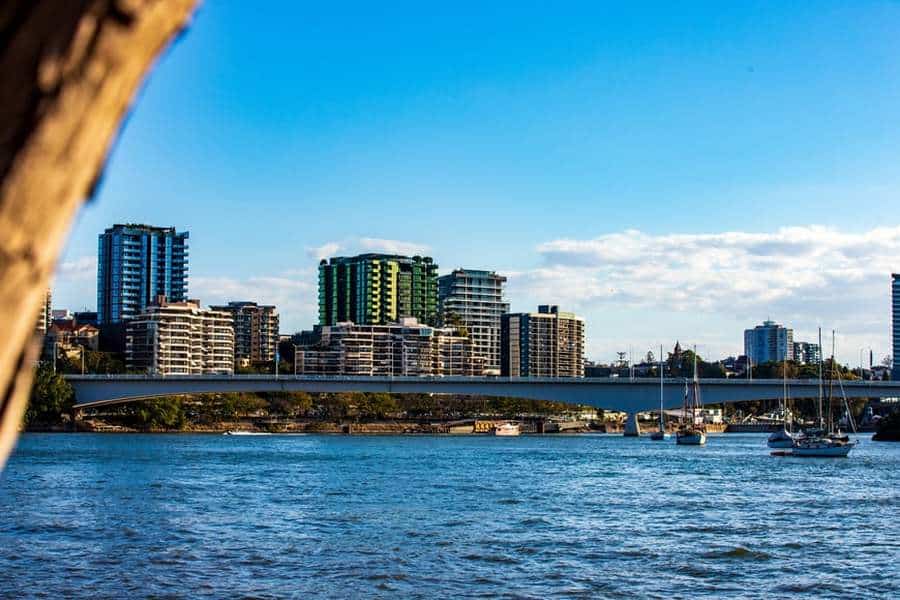 .” However, there is little reason to avoid fishing from the Brisbane River.

This article will explain why the Brisbane River appears “contaminated” and outline food safety surrounding seafood consumption. Then, I’ll tell you about some of the best spots for you to try fishing along the Brisbane River. So, let’s get into it!

Is the Brisbane River Contaminated?

The Brisbane River is not contaminated. Although Brisbane appears brown and murky, its colour does not indicate that it is contaminated. Dr Paul Maxwell, the principal scientist at Healthy Land and Water, says the river is cleaner than ever.

However, like any urban waterway, the Brisbane City Council

says there is some presence of microbial contamination in the Brisbane River. The levels of contamination change daily based on flooding and rainfall.

You can view current conditions of contamination in the Brisbane Rivers

. It is also essential to refer to local signage around the river to check for consumption advisories.

recommend limiting or avoiding eating types of fish due to contamination. Although the risk of contamination may fluctuate, proper cooking and cleaning of the fish should always remain the most critical concern.

Why Is the Brisbane River Brown?

The Brisbane River is brown due to decades of urbanization. As new land was cleared, more amounts of sediment, or dirt, were flushed into the water. So, the Brisbane river is just muddy, not contaminated.

The Brisbane River is also an estuary

or a body of water where rivers meet the sea. Since these wetlands contain a mixture of freshwater and saltwater, the river will not appear like rivers located inland.

How To Properly Cook And Clean Fish

Once you catch a fish from the Brisbane River, it is critical to follow fish cleaning standards

so no one becomes ill after consumption.

Once the fish is dead, it should be cleaned within two hours and eaten (or properly stored) within 24 hours. While cleaning the fish, avoid puncturing organs and intestines. You want to limit the introduction of additional bacteria to the fish.

For more information about cleaning a fish, watch this YouTube Video from FilletingFish:

After you clean the fish, you need to cook it properly. Seafood is a common cause of foodborne illnesses, and it is highly preventable.

principles when cooking a fish to lower the risk of foodborne illness:

Some Groups Should Limit Their Fish Consumption

It doesn’t matter what body of water you caught your fish in – nearly all seafood contains a small amount of mercury, a toxic metal. When a larger fish eats a smaller fish, mercury levels in the larger fish increase. So, it may be best to avoid eating

large fish like sharks, swordfish, tilefish, and king mackerel since these fish contain higher levels of mercury in their bodies.

Most adults are safe to eat two meals of cooked seafood a week. There is little risk of high mercury consumption if you balance your diet with fish and other foods.

However, pregnant women, people who are breastfeeding, and children should avoid eating fish with high levels of mercury because mercury harms the development of the nervous system.

Elderly persons, children, and those with an immune system that is compromised should be extra cautious when eating fish. Eating fish poses the risk of contracting a foodborne illness.

Those with a healthy immune system can usually fight off foodborne illnesses, but those with weakened immune systems could have serious health problems if they eat fish that has not been properly cooked.

Where Can I Fish In The Brisbane River?

There is a variety of fish flowing in the Brisbane River, and it is also easy to access fishing spots since the river flows through the city.

Brisbane is known for great land and boat fishing. Here are some of the best spots for fishing along the Brisbane River

. Since the river runs through the city, a few parks near the river allow camping.

The Colmslie Recreation reserve is just off Lytton Road

at the end of Col Gardner Drive. This fishing spot is family and dog friendly, and it makes a lovely place for a day trip. Many groups meet up at their pier for fishing, and you’ll likely see several other people there with their rods at any time of day.

The Kookaburra Park West location is at 54 Caringal Drive

, Karana Downs, Qld. This park is a peaceful, less-crowded fishing and boating spot.

If you are looking for land-based fishing, go near the shoreline, where the Brisbane River meets Moreton Bay. You will find platforms, walkways, and rock walls to kick off a day of fishing.

Despite the appearance of the Brisbane River, it is safe to eat from its waters. Always refer to local authorities and signage for updates on containment levels in the river.

However, it is essential that you properly clean the fish, limiting the time bacteria can grow on the fish. Also, follow food safety principles to prevent foodborne illnesses.

There might not be a lot of camping areas directly near the Brisbane River, but there are plenty of parks and recreation areas that provide access to great fishing.