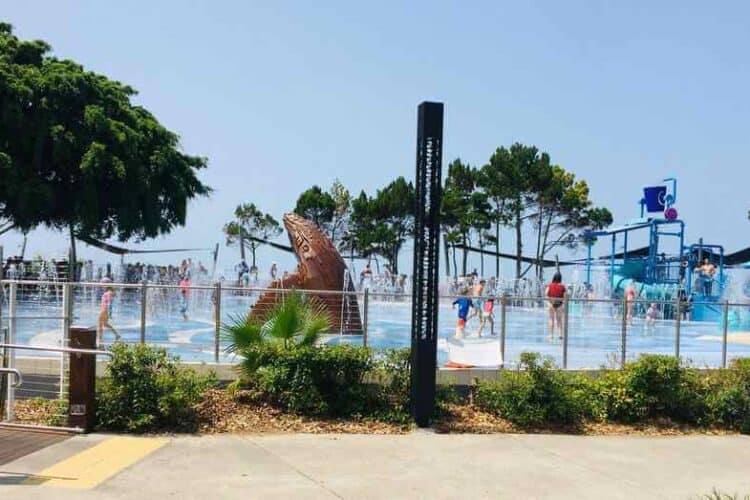 The awesome WetSide Hervey Bay was officially opened on the 6 December 2009 as part of Queensland’s 150th Celebrations.

Located on a hectare of foreshore land between Pialba Caravan Park and Seafront Oval on the Esplanade, the park is built on 384 piers sunk deep into the sand to raise the traffic areas on boardwalks, preserving the dune structure beneath and allowing native plants to flourish.

The opening also co-insides with Queensland’s 150th celebrations, and situated on a hectare of land right near the beachfront, it was to be one of the biggest, and best designs bringing local business trade and locals a true delight.

Nearly 400 piers were built and carefully designed to lift the area and traffic flow that walk through the area off the ground.

Taken from Hervey Bay’s stormwater network, the water is then harvested through to the WetSide park.

Literally, hundreds of fountains and jets propel water high into the air in different patterns to amuse and delight those who love being in the water.

Their groundwork that was put in play was to be of soft rubber-like materials that were also non-slipping.

A few rises in the groundwork make for a fun and different approach when playing around the park.

There is also a small under 5’s tot’s area for the littlies. Parents can enjoy playing in the smaller jets and sea life design with their small children in the undercover area.

There is a tipping bucket which fills automatically and dumps large sums of water on the giggly crowd waiting below that has proved to be hugely popular.

Music plays in the background for your enjoyment and there is also a kiosk on-site for those wishing to purchase drinks and snacks while at the park.

For the older children and teens, there is a surfing apparatus set up so you can take your chance at learning to surf the big waves.

Teenagers have been known to line up waiting to have their turn and this also runs all day long. This static wave machine is of excellent design and the cost of this is $5.00, even though the actual park is free of charge to enter.

Amenity blocks are on site, and there is a baby change room for those wishing to use this room for their smaller children.

Plenty of seating and tables are well situated all around the WetSide park area, and many people have been noted to have planned birthday parties and other occasions at the park since its opening.

This place is the greatest place to take your children for a fun day out with little expense. Hervey Bay’s greatest, new attraction or if you’re looking for more free things to do check our page here.

Opening hours vary day to day. for up to date timetables please refer their website.

Check Out Other Things To Do

link to When Was Fraser Island World Heritage Listed?

Australia has many beautiful places from coast to coast, however, one of the most remarkable places in the country is Fraser Island. Fraser Island is the world's largest sand island that is situated...

Continue Reading
link to Are There Crocodiles In Maryborough?

Australia is full of many different iconic species of wildlife. From the ocean to the mainland, Australia is well-known for its diverse animals. While there is no shortage of interesting wildlife...