During the 1992 season reports were received that there was a white Humpback whale sighted in the Whitsunday Passage and a little later a television news report, taken from an aircraft, showed this.

Is this the only white Humpback in the world?

Apparently, it is an albino humpback whale. The Southern Hemisphere Humpback whales are generally pure white on their bellies and underneath their tails, in contrast to the Northern hemisphere humpbacks, which are mainly

At times some animals are sighted in Hervey Bay with almost black tails (on both sides), whilst other animals have white almost, but pure white? And will it come into Hervey Bay?

This was answered by Barry Seymour, skipper/owner of one of the whale watch fleet’s vessels, Seaspray, when he reported on 13th of September 1992, that the white whale had entered the Bay, but in a most unusual way.

It was sighted with two whales in front, two on either side and two following it. He was escorted by six males, almost like royalty.

When other vessels arrived they found the white whale on its own, very, almost painfully shy, surfacing occasionally. The following morning it had gone.

The whale watch fleet discussed afterwards of what could have happened. Perhaps too many vessels for too long a period, all hoping for a good photograph, preferable of it breaching, of course.

All of them agreed that next time we would give it space, at least 300 metres for no more than two vessels at the time. 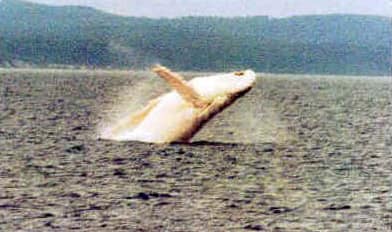 Above: Even though the day was very overcast the “white whale”

Of course, no one can tell whether this made the difference, but when the white whale again came into the Hervey Bay on 29th of August 1993, all of the whale watch vessels kept that distance.

Some whale watchers only saw the white dorsal fin and back, but later that day the white whale was joined by two “ordinary” Humpbacks and it became very playful, even some magnificent breaches. Unfortunately, the day was rather overcast, which does not do justice to the photographs

The white humpback which has been named H2 has not been seen in Hervey Bay since that day but we hope that he (he is definitely male) will return one day. Maybe this year?

Whale watchers were craning to get a glimpse of the renowned white humpback whale which has not been seen in Hervey Bay waters since 1993. The whale was reportedly first spotted in Platypus Bay early yesterday by the catamaran Karma, which directed other whale watching boats to the area.

Volante III skipper Allan Short said passengers had caught sight of the whale about 7.30 am in the northern end of Platypus Bay, about half a mile off Fraser Island’s Station Hill, just east of Rooney Point. Mr Short said the whale was “pure”.

The whale appeared to be alone and could be heard singing which confirmed it was a male (only male humpbacks sing). Mr Short estimated that at about 13 metres long the whale would be nine or so years old.

The whale watching fleet had recognized that the whale was of special interest and operators had agreed to extend their normal approach limit of 300 metres to 500 metres – in accordance with regulation recommendations.

“We didn’t want to upset him in any way …it’s excellent to see him back and in such good health,” Mr Short said. Pacific Whale Foundation (PWF) spokeswoman Tricia Naessig said every indication led the foundation to believe that the white whale

She said previously observed behaviour patterns had already led the foundation to suspect that the white humpback was a male.

If it was a true albino it was the result of the mating of two whales with recessive albino genes — that likelihood was slim. The last confirmed sighting of the white whale had been in the Whitsunday Islands in July this year.