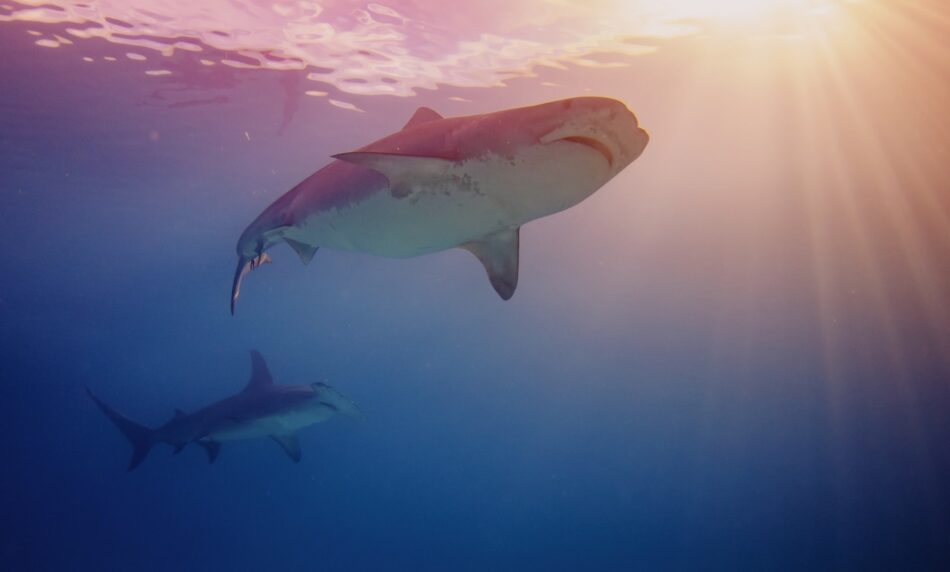 If you’re in the area, a visit to Woodgate Beach is a must. It’s a coastal town in Bundaberg, around 4 hours north of Brisbane, and you know it’s a good place to visit because it’s where the locals go for their holidays. The coastal area of Woodgate is a place of stunning natural beauty, and Woodgate Beach itself has 16km of beach.

If you worry about beach safety, you might well be wondering whether or not there are sharks at Woodgate Beach, so let’s take a look.

Woodgate Beach is a safe beach because it is protected from the wider ocean by Fraser Island. Because of this, you are unlikely to encounter a shark at Woodgate Beach and there has never actually been a shark attack reported in the area.

But that doesn’t mean that there aren’t any sharks in the area at all, so let’s dive a bit deeper into what might be in the waters around Woodgate Beach.

Woodgate Beach is a very popular beach area, where families come every year to enjoy the water, sand, and other amenities. Because the coastline of Woodgate is so long, Woodgate Beach isn’t the only part where you can go into the water.

The area starts at Theodolite Creek, which is a popular spot for fishing and water sports and ends at Burrum Point.

Woodgate Beach is generally a safe beach as its waters are protected by Fraser Island, making it a calm beach with very few sharks or other dangerous sea creatures. Sharks are occasionally spotted in the waters around the inlets at each end of the beach in Theodolite Creek and Burrum Point.

Woodgate Beach itself is considered a “relatively safe” beach. The main dangers there come from the potential riptides that can happen when the waves get higher, and these are much more pronounced once you get to Theodolite Creek and Burrum Point.

Some species of shark, such as the bull shark, tend to prefer the shallow water that you find a bit further inland. And it makes them more dangerous to us because it means that they inhabit the same water that we tend to congregate in. Shark attacks on humans are, thankfully, incredibly rare.

There were 57 shark attacks last year worldwide, with 13 of them being fatal. You are more likely to do die from a fall than being bitten by a shark (1 in 218 vs 1 in 3.7 million).

Of course, that doesn’t mean that you should take any risks when it comes to sharks. There is always a chance that you could be unlucky.

You will be pleased to know that there is no recorded instance of a shark attack happening at Woodgate Beach, and the records began in 1845. So you can count yourself pretty safe when you are in the water there.

With that being said, shark attacks, in general, are on the rise, and sightings of sharks in the waters around Woodgate Beach have also risen, so it is important to stay vigilant.

There have been two recent fatal shark attacks in coastal areas that are relatively close to Woodgate Beach. In July 2020, a 36-year-old man was killed

when he was fishing off Fraser Island. And in September that same year, a 46-year-old was killed of the Gold Coast.

There are measures that you can take to keep yourself safe and to lower the risk of being attacked by a shark even further. These include:

What Type Of Sharks Are Found At Woodgate Beach?

As with any wild animal, it can be difficult to know exactly how many sharks are in and around Woodgate Beach because they are elusive. There have been reports from visitors and locals that point to sharks that are in the area.

in the waters near Woodgate Beach. Tiger sharks rarely attack but when they do, it is more likely to be fatal.

2. Reports of sharks in the Burrum River near Burrum Point.

in the waters near Woodgate Beach.

There has also been a fair amount of indirect evidence that there are sharks in the area. For example, fishing enthusiasts have pointed to an increase in baitfish as an indication that there is a chance sharks will be enticed closer to shore.

, both with shark bites on them. These animals had clearly been attacked by a shark but it is impossible to tell how far away from the shore the shark attacks happened.

Shark attacks are thankfully ver,y very rare. Being attacked by a shark honestly isn’t something that needs to keep you up at night. There is always a chance, however, especially in an area where you know that there is the potential for shark activity.

do have a slightly higher potential for there to be sharks congregating there.