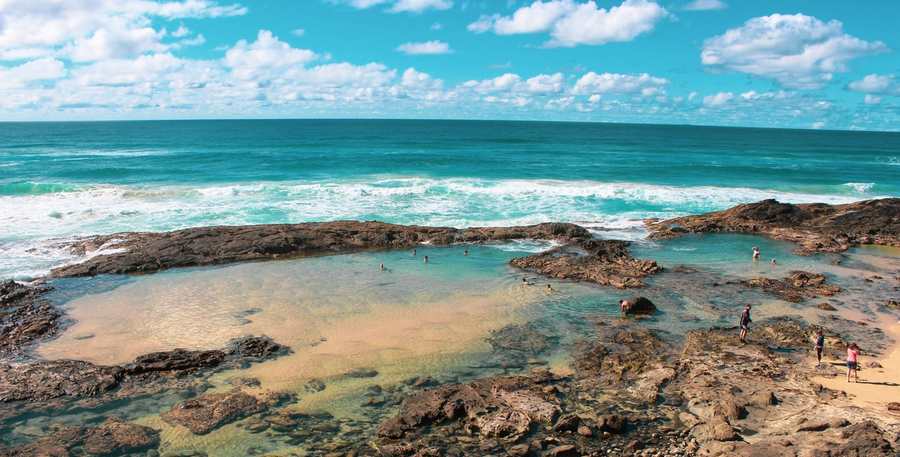 Australia is easily one of the most exotic countries on the planet. The naturalistic scenery that makes this country so idyllic is sprawled from coast to coast.

However, Queensland provides some of the best views in Australia. From Cairns to Brisbane and everything in between, Queensland is known for its beautiful landscapes.

While there are plenty of coastal and inland cities that make Queensland so remarkable, there are various islands off the eastern coastline that are amazing as well. This is particularly true for Fraser Island!

Fraser Island is the world’s largest sand island. Just visiting an island that is comprised of 98% sand is really fascinating to see in itself. The rainforest here grows right out of the sands and there are over 40 freshwater lakes some of which you can swim in, it’s definitely worth visiting.

While a sand island might not seem very interesting, Fraser Island certainly proves worthy of visitors.

There are historical sites, beautiful sand dunes, walking trails, exotic flora and fauna, lush rainforests, and so much more. There is a lot to experience on the island which makes it such a huge attraction for visitors.

Because of the naturalistic setting of the island, including its ancient rainforests, the island is a world heritage site.

This title is given to areas of the world that are stunningly beautiful with significant historical backgrounds, landmarks, and natural properties. This title only makes the island more remarkable for visitors to experience.

Throughout the thousands of years that the island has been in existence, it has continually grown to be the popular destination that it is now.

Historically, the island was named by the Butchella people

as ‘K’gari‘. The Butchella people are the original indigenous population of the island and they dubbed the island with this strange name because they believed that K’gari was a spirit who helped Yindingie (a messenger of the god Beeral) create the island.

Between the gorgeous landscapes and the rich cultural connection it has to the Butchella people, Fraser Island is definitely one of the most fascinating places to visit in the world.

Why Do Tourists Visit Fraser Island?

Fraser Island attracts visitors from all over the world every year, with increasing numbers each year. In fact, it is estimated that the island sees somewhere between 380,000 to just over 430,000 visitors in a year!

These flocks of tourists aren’t heading to the island for just any ol’ reason. Tourists make the journey to Fraser Island to see one of the best locations in all of Queensland. Because of the island’s incredible size, beauty, and history, people are drawn to it like a magnet.

Moreover, people have even been known to tie the knot on the island’s sandy shorelines! The sheer beauty of the island is what really brings people to the location.

It truly feels like a paradise away from everyday life. This is particularly true for various landscapes and wildlife that can be seen on the island.

The ancient rainforests that sprout from the sands are a once-in-a-lifetime experience for people. There are plenty of walking trails winding through these forests which envelopes visitors into a totally immersive experience.

The wildlife is also quite interesting on the island. There are over 350 species of birds that dwell on the island making it ideal for those who enjoy seeing exotic birds.

While the birds on the island are a sight to see, so are the dingoes. Dingoes are considered dangerous if they are provoked and if someone is encountering one, they should back up slowly and stay as far from them as possible.

Many of the campsites and lodging options that are found on the island have dingo safe fences to help protect guests.

What Is Fraser Island Known For?

Sure, Fraser Island is known for its sand, rainforests, perched lakes, etc. However, what is the specific key points of interest that make this destination so desirable?

The beauty alone of these areas is incredible, but exploring the island is what sets forth someone on a grand adventure of this famous island! Below is what Fraser Island is most known for!

While the island has 40 different perched lakes, Lake McKenzie is among the most notorious. Perched lakes are formed when sand is combined with decomposed matter to rise above sea level.

As a result, rainwater enters the lakes which creates really pure water. In Lake McKenzie’s case, the waters are a stark pristine blue.

The pureness of the water creates this crystal clear blue effect. Moreover, the beautiful water of the lake is met with white sand on its shorelines.

Due to the pureness of the water, there aren’t any fish or creatures living in the lake and the sands around it are absolutely soft to the touch.

This ideal setting makes for some excellent swimming, although wearing sun lotion is prohibited as it disturbs the lake’s water.

Coastal headlands are found in various places in Australia, however, Indian Head is one of the most famous ones.

This headland juts out into the ocean giving visitors stunning views of the vast open ocean.

Visitors to the headland can see various wildlife like sea turtles, osprey, dolphins and so much more.

The headland is best accessed by 4WD vehicles, especially since it sits off of 75 Mile Beach, a known beach where visitors can drive.

There is a small walking track to the top of the headland where guests can soak up all the beautiful views!

75 Mile Beach runs along the eastern coast of Fraser Island and is super popular among people wanting to adventure the island with a 4WD.

The beach itself is considered a highway that can be driven at low tide.

The beach’s great length is where it gets its namesake and it is an iconic way to feel seamless among the coastline riding between the landscape and ocean.

The beach is also home to the historic Maheno shipwreck which washed upon its shore back in 1935.

The Maheno shipwreck is possibly one of the coolest things on the island aside from the landscape.

was originally an ocean liner with service between New Zealand and Australia, specifically crossing the Tasman Sea

During its life, it also was used by the New Zealand Naval Forces during the First World War

A cyclone ended its time at sea, washing it ashore on Fraser Island around 1935. Since then, the ship has attracted many visitors to its sandy grave.

These rusted bones of the ship are often photographed and they really a lot of character to the beach shoreline.

The rainforests that grow out of the sand dunes is quite possibly the thing that gives Fraser Island its stunning beauty.

These towering trees have existed for many, many years. In fact, some of the plant life on the island is considered prehistoric.

Guests can travel along many walks that wind through the rainforest areas throughout the island.

These walks are around various lakes and through the dense parts of the forest itself.

Along the way, there are plenty of trees to see including hoop pines, brush box, strangler figs, and many more. These ancient trees have grown immensely over the years, creating a gorgeous canopy among the forest.

The Pinnacles, 72 Different Colours To View

The Pinnacles are a natural formation of coloured sands that are truly stunning to see. Sure, the whole island is sand, but these sands come in a variety of colours.

In fact, there are said to be 72 different colours throughout these sand mounts. Over the years, weather events have caused their formation, creating a natural piece of artwork.

The various hues are the result of different levels of clay and iron that have bound together.

They are specifically located just north of the Maheno shipwreck and are best accessed by a short path that leads directly to them.

No matter what iconic spot someone is travelling to Fraser Island for, it is totally worth visiting! The island is a great place to make memories with friends and family!

Check Out The Current Pricing For Tours Here