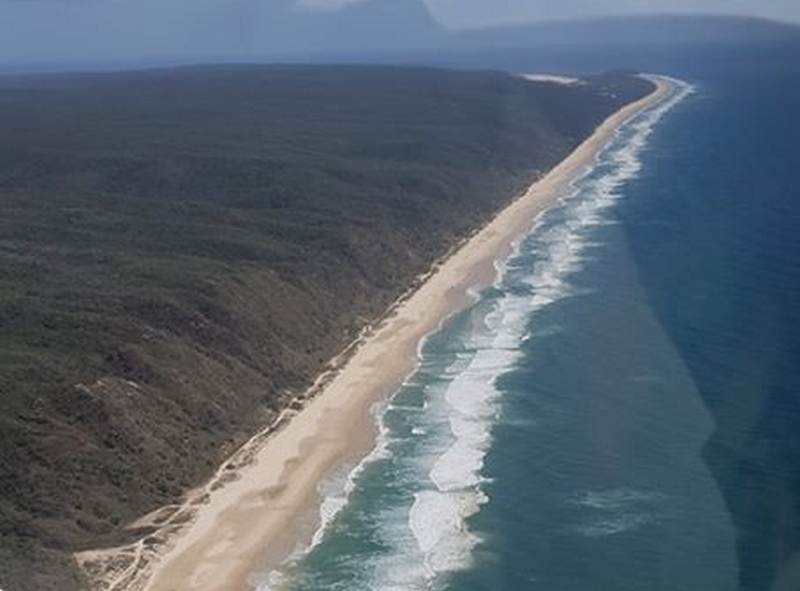 Fraser Island is one of Queensland, Australia’s biggest attractions. This incredible sand island sits off of the eastern coast in the Hervey Bay region of the state.

The island is popular due to its ancient rainforests, sand dunes, historical sites, perched lakes, and much more.

In fact, it draws in over 400,000 visitors every year. With so much foot traffic on the island, some people wonder if there Fraser Island gets decent phone reception.

Phone reception on remote islands is generally hard to come by and Fraser Island is no exception. Fraser Island can be very remote when it comes to phone reception and Australia is quite large, making it even more difficult to get a good signal. This happens when it storms or there is lots of wind.

This isn’t to say there isn’t any reception at all. However, the weak signal that some people might actually get isn’t really strong enough to do anything worthwhile.

This is particularly true when there are bad storms or unpleasant weather.

Fraser Island is quite massive with over 1,600 kilometres (or almost 700 square miles) of space.

Additionally, the island has rugged terrain due to the sand dunes as well as lots of flora including the rainforests.

All of this plays a big factor in why the reception on the island isn’t that great.

Spotty service can be found in the south-western parts of the island and more populated areas like Happy Valley, Kingfisher, and Eurong.

Considering that the reception isn’t that reliable, guests should never rely on mobile phones as their only means of communication.

In the event of an emergency, guests should always have another way to contact someone for help.

Although, sometimes it is possible to still dial Australia’s emergency number “000” without reception. However, guests shouldn’t take this risk.

Other forms of communication include satellite phones

or UHF radios. Bringing one of these as a form of backup is always a smart idea.

Life is unpredictable and having the means to contact someone is absolutely necessary!

is a popular Australian phone network provider. They are continually making adjustments to ensure that their coverage is as wide as possible.

But will it reach Fraser Island? The answer is yes…and no. According to their coverage map (which can be found on their website

When it comes to Fraser Island, the most coverage is found in the southern tip of the island with patchy service extending to the southwest and southeast areas.

Additionally, there is more coverage on the western side of the island (as it is closer to the mainland).

Travellers heading to the eastern side of the island and further north or northeast can expect some major disruptions in their service.

is another big phone network in Australia. In fact, they are also a popular network found in London.

Compared to Optus, the coverage is generally the same throughout Fraser Island with the exception that Vodafone sims aren’t covered in the northern part of the island.

Optus isn’t much either, but Vodafone has a bit less coverage though.

However, according to their current coverage map on their website

, Vodafone claims to have some coverage in the north-western part of the island.

When saying “some coverage” it is important to note that the coverage is a very, very thin line of blue.

More than likely people with Vodafone’s will experience little to no coverage at all in the northern part of the island.

This is why it is super important to have another form of communication handy.

Almost all tour groups will have UHF radios available for guests but emphasising the importance of bringing extra communication is more helpful for those travelling with friends outside of a tour group.

No matter where someone is travelling it is important to have someone around and have some sort of communication available.

This is especially true for Australia where there are dangerous conditions like wildlife encounters.

This isn’t to say that someone shouldn’t bring their mobile phone as well. Rather, they should prepare with extra backup for communication.

Mobile phones are a great thing to bring along on a trip not only for the communication aspect but also to take pictures of the trip.

It is possible to get UHF radios

from 4×4 rental facilities if someone is planning on a 4WD vehicle adventure on the island. This is the best resource to have as a backup plan if there is no phone reception.

Satellite phones are another great option for having a backup form of contact. Satellite phones ping off of satellites orbiting the Earth making them much different from regular mobile phones.

Regular mobile phones rely on cell tower data in order to operate. Considering that satellite phones gain their reception in a different manner, their coverage is much more extensive.

Ultimately, they can be used anywhere on Earth due to the Earth being orbited by satellites constantly. There are options to rent satellite phones as well as buy them online.

Kingfisher Bay Resort is a popular resort located on the western side of Fraser Island.

Because of its location, guests are able to get some reception at the resort. While the resort is located within a better range for coverage based on Vodafone and Optus network maps, guests shouldn’t expect perfect coverage.

Once again, it is important to remember that Fraser Island is quite large and vast making its ability to provide average or above-average coverage nearly impossible.

Is There Wifi On Fraser Island?

There is WiFi on Fraser Island, specifically at the major lodging locations including Kingfisher Bay Resort, Happy Valley, and Eurong.

WiFi is a phone’s way to connect to the internet. It is important to note that WiFi reception can also be spotty on the island just like mobile phone reception can be.

WiFi is created when radio waves are transmitted to an antenna that is then decoded by a router. Considering that WiFi essentially uses the same technology as mobile phones, the signals aren’t that great.

Kingfisher Bay Resort might have the best reception for WiFi considering how close it is to the mainland.

Should I leave My Cell Phone At Home If Travelling To Fraser Island?

You should never leave your cell phone behind no matter where you are travelling. On the off chance that you might have reception, it is important to have it.

Additionally, having it in conjunction with other forms of contact is a great way to be fully prepared for an adventure on Fraser Island.

that can be plugged in and provide extra signal strength for mobile phones.

It is important to note that these would be used at your place of lodging and would be used within the resorts to expand their possible reception connections.

These boosters are small in size and have a tall antenna meant to reach out and grab more signals. This isn’t a perfect solution, however, it is a great way to possible get just a little better signal.

These are the best ways to attempt to make any reception signal stronger (or to have the best access to the signal). For those who must have some sort of mobile phone signal, these tips could help.

Although some would argue that taking a break from the screen and kicking back with nature is the best way to really enjoy Fraser Island!

Remember, when travelling to Fraser Island you shouldn’t expect to have great phone reception. In fact, it will probably be quite patchy in most areas and non-existent in others regardless of what phone carrier network you have.

This is why tour groups bring UHF radios

or satellite phones to ensure that they are fully protecting everyone within the tour group.

As mentioned before, this is why attempting to obtain one of these contact devices is so critical for anyone outside of a tour group.

It simply keeps any and all lines of communication open between the island and the mainland.

Book Overnight Stays At One Of The Resorts On The Island

Once again, this is particularly true for Kingfisher Bay Resort since it is so close to the mainland.

Even though cell phone reception isn’t guaranteed at these locations, they might be able to pick up better signals over other lodgings on the island like campsites, etc.