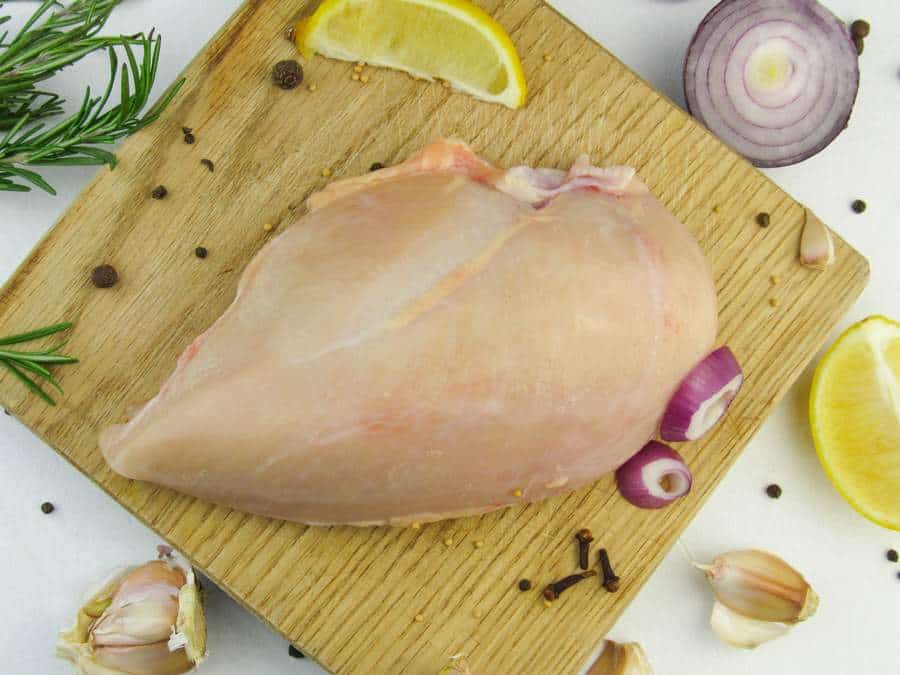 South Australia is famous for its fishing spots, boasting an abundance of flathead, bream, catfish, cuttlefish, crustaceans, and more. As every angler knows, using the right bait is essential to catching fish. Many beginners may try to use chicken or some other meat easily available at home for bait, but the South Australian Government has strict rules against that.

You cannot use chicken or any meat other than a fish, worm, or insect as fishing bait in South Australia. You also cannot use bone, skin, meat, blood, or offal of chicken or any other animal. Only worms, insects, and fish parts may be used as bait or burley.

In the rest of this article, we’ll discuss why chicken and other meats are not allowed as bait, which baits you can use instead, and where you can find fish bait in South Australia.

Why You Cannot Use Chicken As Bait In South Australia

Depending on the fish species you want to catch, fish bait is specially chosen. Some fish eat the meat of any kind, so anglers looking for those use meat baits. Other fish feasts on insects or worms, while some are attracted to bright, colourful baits like soft plastics.

However, many beginner anglers make the mistake of using cooked meats like chicken to catch fish.

Chicken, other meats, and cooked seafood like prawns often carry aquatic diseases. These diseases do not affect humans, which is why it’s safe to eat them. However, when introduced to aquatic life forms, these diseases can quickly spread and turn deadly.

The Department of Primary Industries and Regions of South Australia (PIRSA

) has issued specific warnings against using meats, cooked seafood, and animal parts as bait. This prohibition is to prevent the spread of aquatic diseases.

Let’s look at two of the main diseases

that can be introduced by using the wrong bait.

Pacific Oyster Mortality Syndrome (POMS) is a disease caused by the OsHV-1 micro variant. This disease first causes changes in the hemocyte physiology of the affected oysters, followed by a dysbiosis of the microbiota.

In simple terms, it causes changes in blood structure and function and eliminates the useful, symbiotic bacteria of the affected oysters. This weakens the oysters, making them vulnerable to infections from other harmful bacteria.

Due to its high growth rate and rapid spread, POMS

has a 100% mortality rate. It also affects the Pacific Oyster (Crassostrea Gigas) species specifically, which makes up 98% of farmed oysters worldwide.

POMS does not affect human health, so there is no danger to humans who consume oysters. However, if the disease was introduced to aquatic life in South Australia, it would be deadly for the local oyster population.

was observed in the Port River. As a result, anglers are prohibited from using bivalve shellfish (oysters, mussels, cockles, etc.) from Port River as fish bait. Removing and releasing these species into other waters from the Port River system is prohibited for any reason.

White Spot Disease (WSD) is a highly contagious aquatic disease that affects crustaceans. It was first seen in Australia on prawn farms

is caused by a parasite, Ichthyophthirius multifilii, which quickly multiplies and spreads to other fish. The parasites burrow into the skin and gills of the infected fish and eat its flesh from the inside.

Common symptoms in infected fish are:

Although the disease has never been observed in South Australia, the PIRSA still maintains strict rules to prevent its introduction.

What Fish Bait Can You Use In South Australia?

You can view the full list of bait and burley guidelines

for recreational anglers on the PIRSA website. If you have more questions regarding approved baits

South Australia permits the use of meat-based baits like worms, insects, squid, etc. However, you aren’t allowed to use land-based meats like chicken, bivalve shellfish like oysters, abalones, or cooked seafood that is made for human consumption.

Some organic baits you can use are:

Fresh meat is the most enticing bait for most fish, but inorganic baits also work well. Many tackle shops and fishing stores sell artificial baits or lures made of soft plastics.

If you are averse to using fresh meat as bait, you can purchase artificial baits instead.

Where Can I Buy Fish Bait In South Australia?

You can buy fish bait in any local tackle shops or fishing stores in South Australia. Most of these shops are close to popular fishing spots for easy access to recreational anglers. You can ask local anglers for advice on which shops to buy bait from.

Imported bait has to be appropriately labelled. Prawns and worms from South East Queensland must be irradiated before selling as bait. Always choose well-reputed tackle shops or fishing stores to purchase your supplies.

Using chicken and other meats or animal parts as bait is strictly prohibited in South Australia. The Department of Primary Industries and Regions of South Australia (PIRSA) has strict rules against certain kinds of bait to prevent the spread of aquatic diseases like Pacific Oyster Mortality Syndrome (POMS) and White Spot Disease (WSD).

You can use worms, fish, insects, squid, etc., as bait in South Australia. If you are uncomfortable using meat-based baits, you can use artificial baits made of plastic instead. Always ensure that the bait you purchase is from a well-reputed shop.