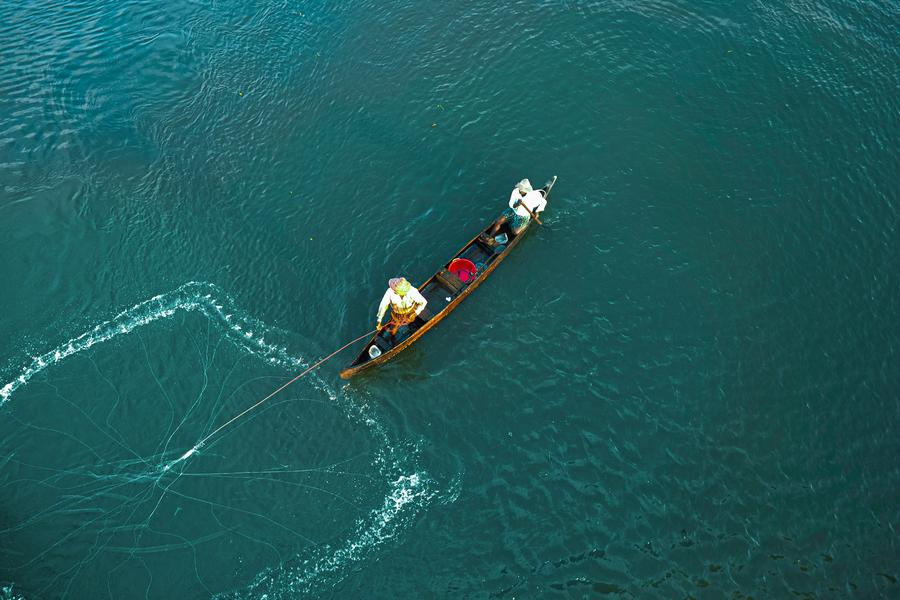 Fishing is a fantastic recreational activity, and it is strictly regulated to protect fish and aquatic life. Before you start to fish in South Australia, it is vital that you know if the government permits you to use equipment like throw nets alongside others. You don’t want to get fined for ignorantly using illegal fishing gear.

This article will explain why throw nets are illegal in South Australia. It will also explore other legal and illegal fishing equipment. Keep reading to learn more!

Why Are Throw Nets Illegal In South Australia?

Throw nets are illegal in South Australia to control overfishing. This refers to a situation in which fishers capture more fish than can be reproduced. The lack of balance caused by overfishing can lead to the depletion of the fish population in major water bodies.

One reason throw nets are prohibited is to prevent by-catching.

This is the capture of many varieties of living things, especially those that are not the fisher’s targets, while fishing. These organisms may include aquatic birds or mammals that are endangered or have a low population size in South Australia.

If these aquatic animals are returned to the water, they are often dead or injured after being kept out of their natural habitat for some time. This change will reduce the species’ population in the water body and affect the food web of the aquatic habitat.

Some also believe that throw nets contribute to overfishing. Many find throw nets to be wasteful fishing equipment.

South Australia has strict laws to regulate fishing in its waters. Besides throw nets, many kinds of fishing gear are prohibited in South Australia. Some legal fishing gear also has regulated uses, and you could be fined for using them inappropriately.

To enjoy a safe, legal fishing experience, you should be aware of the specific legal dimensions and requirements as well as the laws regulating your equipment. Fishing equipment that is strictly prohibited in South Australia includes the following:

Below I will give more details on this equipment and why it is prohibited.

Throw nets are sometimes referred to as bait or cast nets. As earlier explained, they capture a large number of fish at once. They are detrimental because they can deplete the population of the fish species in the water body.

Whether they are described as cast nets, bait nets, or throw nets, their use in South Australia is punishable by a fine. Using them in any form can cause you to lose your fishing privileges.

These are other types of fishing nets with a large volume that enables anglers to sweep up huge amounts of fish from water bodies. The Victorian Fisheries Authority once found a drum net up to 8 feet tall

This size of fishing gear can be disastrous to aquatic life by causing more overfishing and by-catching. Drum nets have been strictly prohibited in South Australia.

Though fish traps reduce the level of by-catching during fishing, they incur a high cost with adverse effects that the Government of South Australia has deemed unsuitable.

Gill nets are another fishing equipment that is strictly prohibited in South Australia. A dangerously high number of gill nets have been abandoned in water bodies, and they continue to trap and by-catch aquatic animals for years.

Some of these gill nets can also sink to the bottom

of the sea to pollute the habitat of the organisms living there as non-biodegradable plastics.

If you want to go fishing in South Australia, the legal fishing gear you can carry along include the following:

Some of this equipment has particular specifications, requirements, and restrictions you must abide by while using them. For example, you can only use a bow and arrow in daylight, only in the River Murray, and at least 50 m (164 ft) from anyone who is not fishing with you.

To check other specifications, requirements, and dimensions for this fishing equipment, you can visit the Government of South Australia’s Department of Primary Industries and Regions website for the list of permitted fishing gear

The Department of Primary Industries and Regions in South Australia established the Fisheries and Aquaculture division to regulate aquatic resources, sustain marine life and manage fish stocks in the region.

In South Australia, there are several regulations you must obey to fish legally. For instance, there are certain river and sea areas that have been permanently closed off to fishers. There are also limits to the number of boats one fisher can use, and restrictions on the species of fish that you’re permitted to capture.

If you regularly fish in South Australia, it is important to be up to date with the current rules and regulations of the area. Here is a list of some regulated factors to check out before fishing in South Australia:

You are not required to have a license to go fishing, but be sure to have a good study of recreational fishing regulations in South Australia. Knowing what is legal will help you preserve aquatic life and prevent you from getting fined while you’re out having fun!