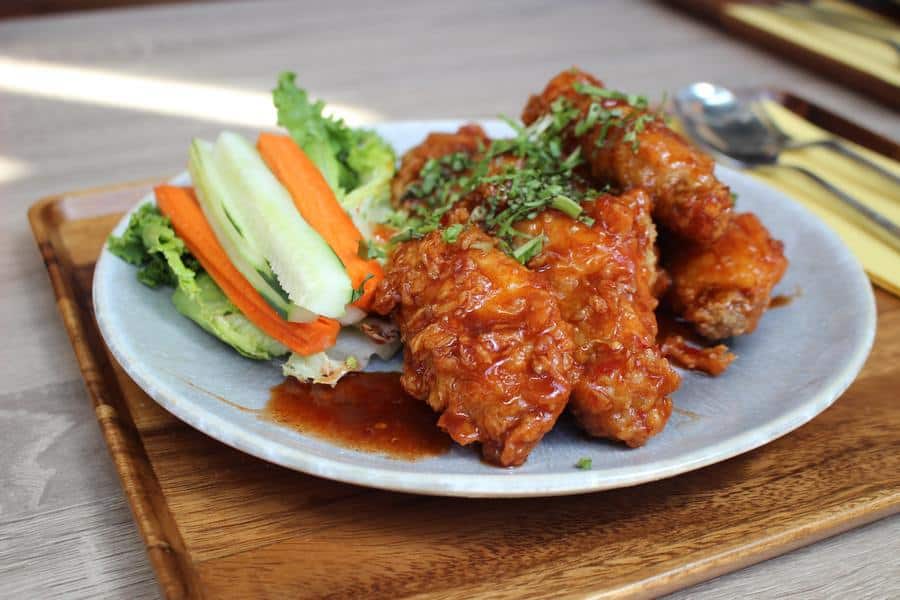 Buffalo, New York, and Nashville, Tennessee are two American cities known for their distinct hot chicken dishes. However, many people wonder – what is the actual difference between the two? Read on to find out!

Nashville hot chicken is marinated in seasonings, fried and spiced with cayenne pepper, and a hot sauce topped with pickles. Buffalo chicken, on the other hand, is coated in a wet sauce. Like a crystal hot sauce, it is hard to keep them crispy due to their wetness.

Nashville hot chicken is typically fried with a lot of spicy hot sauce coated in cayenne pepper. White bread and pickles help balance the heat of this fried chicken. Buffalo Chicken, however, is versatile. You can serve the shredded chicken taco with homemade macaroni and cheese, baked beans, French fries, and pasta salad.

The Difference Between Buffalo And Nashville Hot Chicken Sauces

Because it is spicy, Nashville’s hot chicken sauce can be breaded or put in buttermilk to marinate. It is typically deep-fried, pressure-cooked, or occasionally pan-fried.

The application of a dark chile pepper-based paste, which is made from lard and cayenne pepper powder, also distinguishes Nashville chicken.

In contrast, buffalo hot chicken is a deep-fried chicken wing that is usually coated and dipped in a sauce. Usually, hot Buffalo chicken is served with celery and carrot sticks and sometimes blue cheese dressing.

Buffalo Wings (also known as Buffalo Chicken) became popular as bar food and appetizer in the United States and Canada in the 1970s and 1980s.

In 1990, McDonald’s began offering Mighty Wings as a meal option at their different restaurants in the United States.

The popularity of Nashville chicken sauce has inspired other culinary variations such as Hot Chicken nuggets, sliders, and even pork ribs.

Fun Fact About Nashville Hot Sauce: Thornton Prince, a Nashville Casanova, left his wife at home one night and went out. He arrived home drunk and stumbling in the early hours of the next morning. As a form of punishment, his wife prepared his favourite fried chicken with an excessive amount of hot red cayenne pepper.

To his wife’s dismay, he loved that hot chicken, and that was how the family ended up opening the first hot chicken shack in Nashville. This dish’s popularity grew throughout the city and eventually nationwide over the years.

Stuffing Buffalo chicken in baked sweet potatoes is a healthy and delicious meal. Follow the steps below to prepare this dish.

Preheat the oven to 425°F and prepare a baking sheet with a rim by lining it with parchment paper.

Rub one tablespoon of coconut oil into the skins of the sweet potatoes and season with one and a half teaspoons of salt before baking.

Place the potatoes on a baking sheet and pierce them with a fork a few times. Bake for slightly over thirty minutes, or until tender.

Combine the chicken breast, hot sauce, vinegar, cayenne pepper, 1/3 cup coconut oil, and one teaspoon salt in a mixing bowl. Cook for 20 minutes on low heat, or until the chicken is fully cooked.

After the chicken has finished cooking, remove it from the pot and shred it with two forks. Then, return the shredded chicken to the pot and add some celery and carrot to cook for about 10 minutes over medium heat.

Cut the roasted potatoes to create slits and use a fork to open the sweet potato for the cilantro. Spoon the filling into the potatoes and put the desired amount of ranch dressing and sprinkle with cilantro and serve warm.

Approximately forty minutes are required to prepare buffalo chicken meatballs. This is a straightforward recipe to follow. The following steps are required.

One tablespoon of olive oil should be heated in a skillet over a medium heat setting. Add some celery and onions.

Cook the celery and onions for about three to four minutes until they are soft but not mushy. Allow it cool till it reaches room temperature. In a medium bowl, combine the celery mixture with egg, mustard, and ground chicken. Then add breadcrumbs, salt, and pepper, and mix until everything is well combined.

Form the mixture into a 1-inch ball and heat three tablespoons of olive oil in a skillet set to medium heat.

Cook the meatballs until they are golden brown, approximately 2 to 3 minutes per side (8 to 10 minutes total). Then, shake the pan to roll the meatballs around in the hot oil to make sure they are done.

Melt butter over medium heat and whisk in hot sauce until smooth; then coat meatballs with the sauce.

Serve the meatballs warm with a side of blue cheese dressing. The meatballs can be prepared in advance and reheated on the stovetop or in the microwave.

This recipe can be prepared in just twenty minutes using rotisserie chicken and blue cheese dressing purchased from a store.

In a medium bowl, combine the chicken, buffalo sauce, and melted butter. Preheat a large skillet over medium heat.

To soften each tortilla, heat it for approximately 30 seconds per side. Place one tortilla at a time on a work surface and spoon one-fourth cup of the chicken mixture into the centre of each tortilla.

Add a half cup of mozzarella, a quarter of celery and celery leaves, and two tablespoons of blue cheese dressing on top.

Fold the sides of the tortilla in toward the centre to enclose the filling, then roll up the tortilla as tightly as you can.

Buffalo Chicken Mac & Cheese is a combination of Mac and Cheese and hot chicken wings. This recipe is delicious and very creamy, and it only takes a short time to make.

Cook the pasta, then drain it. Melt the butter in a large skillet over medium heat, then add the onion, celery, and garlic. Cook until tender, about four to five minutes.

Add flour and cook for an additional two minutes, then whisk in milk and Buffalo sauce until the mixture starts to simmer.

Stir in the mozzarella cheese until it is completely melted. After that, add the cooked pasta and shredded chicken and stir to coat in the sauce.

Transfer to a greased 9-by-13-inch casserole dish and bake for 30 to 35 minutes, or until the sauce is bubbly. Allow it to cool for about five minutes before serving.

Buffalo Chicken Dip is a popular dish in the United States, and its main ingredients are chicken, cheese, and buffalo sauce. It is creamy, tasty, and contains all of the flavours of hot Buffalo chicken wings.

To prepare this dish, you will need only shredded chicken and Buffalo sauce.

Preheat the oven to 400 degrees for about two minutes and in a large mixing bowl, combine all of the ingredients for the Buffalo chicken dip.

Pour the mixture into a baking dish and smooth the top with some shredded cheddar cheese. Bake until heated through and the cheese on top melts.

Nashville Hot Chicken is an exciting southern meal that is widely known and regarded as a favourite across the country. Some of the things you need to make Nashville hot chicken sauce are a buttermilk marinade, a homemade spice rub, the buttermilk egg wash, and breading mix.

The following are ingredients to prepare Nashville hot chicken and how they improve the dish:

How To Cook Nashville Hot Chicken

These are some of the fundamental steps in making delicious homemade Nashville fried chicken.

Refrigerate the chicken for three hours after marinating it in a mixture of buttermilk, bay leaves, and homemade spice rub.

Dredge the marinated chicken in a spiced flour mixture, then in a buttermilk egg wash, and again in the flour mixture. Repeat until all of the chicken pieces have been coated.

Fill your oven with vegetable oil until it measures 3 inches deep. Heat the oil over medium-high heat until it reaches 375 degrees Fahrenheit.

Fry the hot and spicy chicken in batches until each piece is thoroughly cooked, then set aside to cool slightly. Brush with as much Nashville homemade chicken sauce as desired.

Nashville hot chicken should be refrigerated in an airtight container. If you store it right, it will last for 3 to 5 days. Stacking the chicken directly on top of each other will make it soggy. Instead, a piece of parchment paper should be placed between each layer.

To reheat Nashville Hot Chicken sauce, use a microwave or an oven. You can add flavors to the chicken before placing it in the microwave. After 90 seconds, transfer the chicken to an even layer and microwave for another 15 seconds.

While using an oven for reheating, spread the chicken on a lightly greased baking rack on a baking sheet. Bake at 325 degrees Fahrenheit until thoroughly heated. You can also reheat it by frying it again. This prevents the chicken from becoming stale.

1. What Is The Heat Level In Nashville Hot Chicken?

As a popular dish made with hot sauce and cayenne pepper, it is only typical that the Scoville unit for Nashville Hot Chicken Sauce falls within the 10,000 to 100,000 categories.

2. What Can I Eat With Buffalo Chicken Dip?

3. Why Does Buffalo Sauce Have Butter In It?

Buffalo sauce gains richness and depth from the addition of butter. White vinegar: adds a bit of acidity for a great taste and cayenne pepper adds the heat and spiciness.

This article has established the distinctions between Buffalo chicken hot sauce and Nashville chicken hot sauce. Although they are two increasingly popular meals in the United States of America, they are prepared in different ways and with different ingredients.

Make sure to try both sauces and discover which one you like best today!

link to The Best Street Food In Cincinnati

Continue Reading
link to What Food Can I Bring Back From Thailand?

It makes sense that you wouldn't want to leave Thailand, one of the most beautiful places in Asia with a rich cultural history, without bringing food back with you. You can go to the nearest...